Return to the Mount movement giving out 2,000 shekels to Jews who are arrested for praying at Judaism’s holiest site. May Hashem bless these brave heroes! 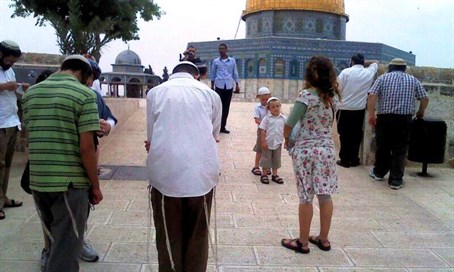 An organization promoting Jewish prayer rights on the Temple Mount launched a program Tuesday, offering rewards to Jewish visitors who defy a ban and pray at Judaism’s holiest site.

The Return to the Mount organization’s ‘Arrest and Win’ project provides a 2,000 shekel ($516) grant to Jews who are arrested for the “crime,” in a direct challenge to Prime Minister Binyamin Netanyahu’s vow to keep the ‘status quo’ on the Mount.

“The situation of the Jews on the Temple Mount is steadily deteriorating by the minute, the destructive prohibitions against Jews regarding every issue of the Temple Mount discriminate against Jews in general and Judaism in particular,” Refael Morris, leader of the Return to the Mount movement, stated to Arutz Sheva.

“We are not willing to see the situation continue to deteriorate, we must act not only to stop the deterioration, but also to add the rights of Jews on the Mount, the first of which is the right to prayer.”

“We hope that hundreds of thousands of Jews begin to exercise their right to pray on the Temple Mount over the protests of Arab terrorists,” he continued. “The Temple Mount is the holiest place for the Jewish people and the First and Second Temples stood there – and [this] further builds the Third Temple.”

Despite being the holiest site in Judaism, Jews are prevented from praying on the Temple Mount by police and Islamic Waqf officials. This, despite numerous Israeli court rulings to the effect that Jewish (and other non-Muslim) worship should be allowed at the site in accordance to Israel’s Basic Law regarding freedom of religion.

Jewish Temple Mount groups are up in arms over Netanyahu’s agreement with Jordan – which administers the site via the Waqf – saying the deal amounts to a victory for Muslim extremists demanding tighter Islamic control over Judaism’s holiest site. The decision to install cameras is meant primarily to appease Muslim demands to ensure no Jews dare pray at the site, as well as to help Israeli police monitor the activities of Muslim extremists at the site.