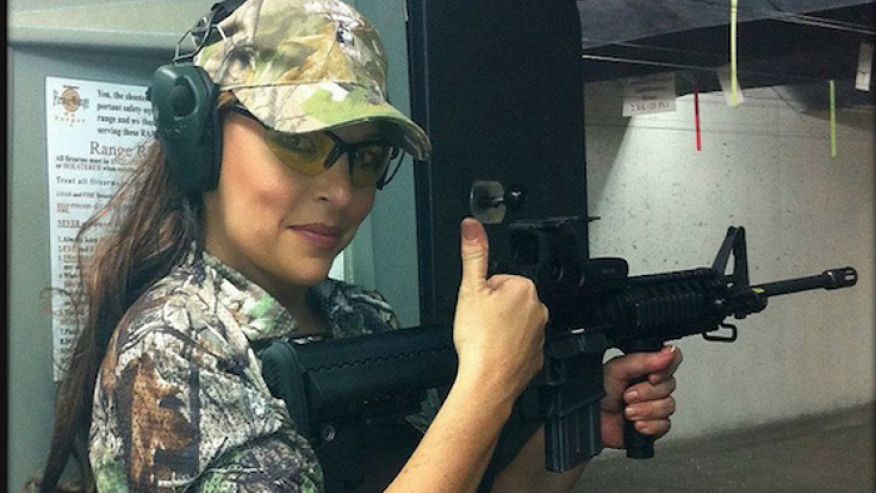 Morgan said she is not worried about anyone coming after her, because she packs heat.

In the five months since Jan Morgan banned Muslims from her gun range in Hot Springs, Ark., business has boomed and predictions of a lawsuit brought by federal civil rights enforcers have so far proved inaccurate.

Morgan, who claims keeping Muslims out of her Gun Cave Indoor Firing Range is a matter of public safety and not a constitutional issue, says she made the decision in September after two customers she deemed suspicious visited. She said their furtive behavior and cellphone ringtones of “Allahu Akhbar” prompted her to revise her range’s policies.

“We are dealing in lethal firearms,” Morgan told FoxNews.com. “I’m not going to let a Nazi shoot in here, or a Ku Klux Klan member in here, either.”

Morgan said she excludes those she believes to be Muslim based on their names. She says business is up, but she has gotten threats, which she brushed off.

“I’m not going to let a Nazi shoot in here, or a Ku Klux Klan member in here either.”- Jan Morgan, gun range operator

But Morgan’s “no Muslims” stance has her in the legal crosshairs of at least two groups. The Council on American-Islamic Relations (CAIR) wrote to Attorney General Eric Holder seeking the Justice Department’s involvement.

“Given the recent spike in anti-Muslim rhetoric, including Islamophobic statements by government officials, community leaders and media outlets, death threats, and other bias incidents targeting Muslims, I urge you to investigate this matter soon,” a letter sent by CAIR to Holder in October stated.

“CAIR believes that systematically banning Muslims from a place of business is a violation of federal laws prohibiting racial and religious discrimination and will inevitably result in a hostile environment for ordinary Muslims in Arkansas,” the letter added.

The Justice Department did not respond to requests for comment on the matter. CAIR’s letter was copied to Gov. Mike Beebe, whose term has since ended, the U.S. Commission on Civil Rights, the U.S. Attorney for the Western District of Arkansas, and the ATF’s Little Rock Field Office. CAIR’s litigation director told FoxNews.com none of the recipients has responded.

The American Civil Liberties Union (ACLU) of Arkansas also has petitioned federal authorities to do something about Morgan’s rules. Executive Director Rita Sklar told FoxNews.com Morgan’s claim the gun range was acting out of legitimate caution is a dog that doesn’t hunt.

“It’s discrimination based on religion, or, in this case, perceived religion and is a violation of the 1964 Civil Rights Act,” Sklar said. “It isn’t based on that person’s behavior or anything they could reliably use that could be used to bar the person from the premises.”

Sklar also said that while the ACLU chapter has not heard back yet from the DOJ, her group would be “more than happy” to proceed with legal action should a client approach them.

“We would be happy to talk to anyone who had been turned away because he or she is Muslim or perceived to be Muslim,” Sklar said. “We would be more than happy to take her to court to get her to do the American, moral thing.”

While no Muslim plaintiffs have stepped forward, a father and son who say they are Hindu claim they were kicked out last week.

“My dad and I just got kicked out of a Muslim-free gun range,” read a tweet from the man claiming to have been booted. “I’m not Muslim, I’m just brown.”

Legal experts say Morgan may be within her rights if her gun range is deemed a private club. Federal law bars discrimination or segregation in places of public accommodation or those that affect interstate commerce. In a legal challenge, Morgan might have to prove that her business does not fall under federal civil rights regulation.

“Federal law forbids religious discrimination by places of public accommodations,” said Cornell University Law School Professor Michael Dorf. Arkansas has a state law that does the same thing. Under the federal case law, in order for an entity to count as a private club, it must have some sort of restricted membership and not be generally open to the public.

“A gun range that is generally open to the public but excludes Muslims – or any other group based on a forbidden classification – could not fairly say that everyone is a member except Muslims,” Dorf added.

Mark Killenbeck, a Constitutional law professor at University of Arkansas School of Law, said if Morgan is sued, she could have a hard time showing her gun range is a privvate club and not subject to the federal statutory ban on discrimination of the basis of religion.

“The Court has held that truly private entities can engage in such discrimination but requires that they are truly and demonstrably private and that the club and its members have a ‘common expressive purpose,’” he said. “There are ways that the owner might be able to make that claim, but I am skeptical.”

In the meantime, Morgan is not budging. She likened offering target practice to potential terrorists to flight schools offering lessons on simulators to the 9/11 terrorists. And because firearms are involved, she said her case is not analogous to cases in which private businesses have been sanctioned for refusing to serve other groups, such as gays.

“One mistake can cost another human being’s life,” she said. “There’s no room for mistakes when you’re handling firearms. We aren’t just refusing to make a wedding cake here.”

Morgan claims business has “quadrupled” with people from out of state coming to the range and some even offering donations for what they predict will be a legal battle. She also said she has been threatened, which she responded to by posting her home address on the range website and daring those issuing threats to do so in person.

“I am the infidel your Imam warned you about,” Morgan wrote under an image of her packing heat.