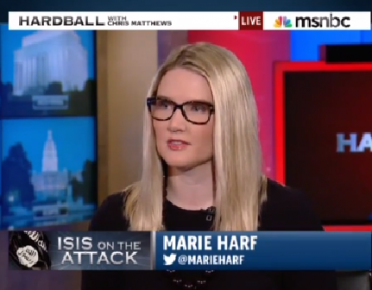 So it turns out the Obama Administration does have a strategy for combating terrorists: give them jobs.

In a remarkable exchange with MSNBC’s “Hardball” host Chris Matthews on February 16, State Department spokeswoman Marie Harf said: “We cannot kill our way out of this war. We need in the medium to longer term to go after the root causes that leads people to join these groups, whether it’s a lack of opportunity for jobs, whether–we can work with countries around the world to help improve their governance. We can help them build their economies so they can have job opportunities for these people.”

Between 1996 and 1999, relief worker Nasra Hassan interviewed nearly 250 [Muslim Israels in Israel] who either attempted to carry out suicide bombings, or trained others for such attacks, or were related to deceased [suicide] bombers. She reported (in The New Yorker): “None of [the bombers] were uneducated, desperately poor, simple-minded, or depressed. Many were middle class and, unless they were fugitives, held paying jobs…Two were the sons of millionaires.”

The attacks on September 11, 2001, focused new attention on the causes of Islamic terrorism. The New York Times reported that the personal details concerning the hijackers had “confounded the experts.”

“They were adults with education and skill, not hopeless young zealots,” the Times said of the attackers. “At least one left behind a wife and young children…They were not reckless young men facing dire economic conditions and dim prospects, but men as old as 41 enjoying middle class lives.”

In 2002, Prof. Alan Krueger of Princeton and Prof. Jitka Maleckova of Prague’s Charles University studied the lives of 129 Lebanese Hezbollah terrorists who were killed in attacks on Israel. They found that as compared to other Lebanese, the Hezbollah members “were less likely to come from poor families and were significantly more likely to have completed secondary education.”

That same year, the Muslim writer Hala Jaber spent four days with Fatah’s Al Aksa Martyrs Brigade, which organized a number of suicide bombings. She found that their members were “educated [and] middle class.”

In 2004, Prof. Alberto Abadie of Harvard University’s Kennedy School of Government undertook a study of terrorists’ motives. When he started, he thought that “it was a reasonable assumption that terrorism has its roots in poverty.” By the time he was done, he had concluded that there is “no significant relationship” between the economic conditions in a given country and the rise of terrorists there.

So why is a State Department spokeswoman presenting job creation in the Arab world as the centerpiece of the administration’s strategy for combating ISIS?

And why do President Obama and his aides still stubbornly cling to the utterly unscientific idea that poverty causes terrorism?

Because in their hearts, they want to believe that we hold the key to ending terrorism in our own hands, so that ISIS can somehow be defeated non-violently. That if we just give them enough financial aid (over $10 billion to the PA [terrorists] alone since 1994), they’ll stop stoning and bombing and burning and beheading us.

That’s what they think. But the evidence says otherwise.