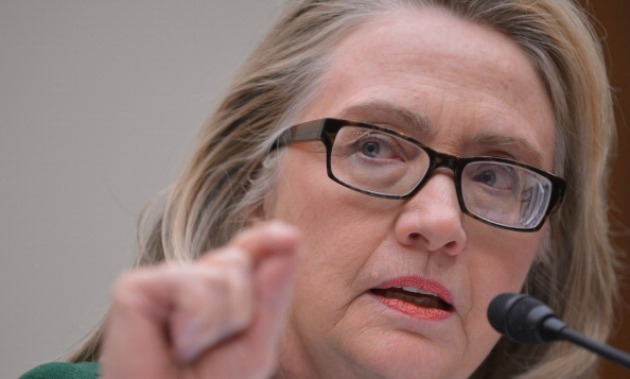 Hillary Clinton admitted to the House Select Committee on Benghazi on Thursday evening that she broke the law in handling security for the U.S. consulate there.

Under patient but persistent questioning from Susan Brooks, Clinton admitted that she had not signed a waiver for security arrangements on the site, as required by the Secure Embassy Construction and Counterterrorism Act of 1999 (SECCA), 22 USC § 4865 2(B)(ii).

Clinton admitted failing to comply with the law in the following exchange:

Brooks: But I have to ask you, if you’re familiar with the facts that in the wake of the 1998 bombing attacks in Nairobi and Dar-es-Salaam, Congress passed something referred to as the SECCA, the Secure Embassy Construction and Counterterrorism Act, which requires the Secretary of State to issue a waiver under two conditions: if the U.S. government personnel work in separate facilities, or if U.S. oversees facilities do not meet the security setback distances specified by the Bureau of Diplomatic Security. The law specifies that only the Secretary of State may sign these waivers, and that requirement is not to be delegated. Was a waiver issued for the temporary mission in Benghazi and the CIA annex, after the temporary mission compound was authorized through december of 2012? And did you sign that waiver, Madam Secretary?

Clinton: I think that the, the CIA annex I had no responsibility for. So I cannot speak to what the decisions were with respect to the CIA annex. That is something i know other committees have–

Brooks: But you acknowledge you were responsible for the temporary mission compound.

Clinton: Yes, of course. But you put them together. I just wanted to clarify that I had no responsibility for the CIA annex, obviously. The compound in Benghazi was neither an embassy nor a consulate. Those are the only two facilities for which we would obtain a formal diplomatic notification. And those were the only kinds of facilities that we would have sought waivers for at the time, because we were trying to–as has been testified to earlier–understand whether we were going to have a permanent mission or not. That means you have to survey available facilities, try to find a secure facility. and the standards that are set by the interagency Overseas Security Policy Board are the goals we try to drive for. But it is, it is very difficult, if not impossible, to do that in the immediate aftermath of a conflict situation. The temporary mission in Benghazi was set up to try to find out what was going on in the area, to work with the CIA where appropriate, and to make a decision as to whether there would be a permanent facility. So we could not have met the goals under the Overseas Security Policy Board. Nor could we have issued a waiver because we had to set up operations in order to make the assessments as to whether or not we would have a permanent mission, whether that mission would remain open. We made extensive and comprehensive improvements to the physical security, which I mentioned before.

Brooks: Madam Secretary, thank you. So it is obvious that a waiver was not signed, and you’ve given a defense as to why a waiver was not signed, and it was temporary because it was made up. It was something different. The compound had never become official. And so, therefore, you did not sign a waiver. Which, when most of our people are stationed in such dangerous places–let me get into that, with respect to the dangerous places–we know that Libya , you’ve testified before, was incapable of providing host nation support. And that involves protecting our diplomats and other U.S. government officials who travel there. So if the Libyan people didn’t have a government capable of providing security, and we didn’t have U.S. military in Libya, then we have two options: we either leave when it gets too dangerous, or the State Department makes sure that they provide that protection.

The relevant section of the law is below. Note that there is no exemption for “temporary” facilities, as Clinton incorrectly suggests.

(2) Site selection
(A) In general
In selecting a site for any new United States diplomatic facility abroad, the Secretary shall ensure that all United States Government personnel at the post (except those under the command of an area military commander) will be located on the site.
(B) Waiver authority
(i) In general Subject to clause (ii), the Secretary of State may waive subparagraph (A) if the Secretary, together with the head of each agency employing personnel that would not be located at the site, determine that security considerations permit and it is in the national interest of the United States.
(ii) Chancery or consulate building
(I) Authority not delegable The Secretary may not delegate the waiver authority under clause (i) with respect to a chancery or consulate building.