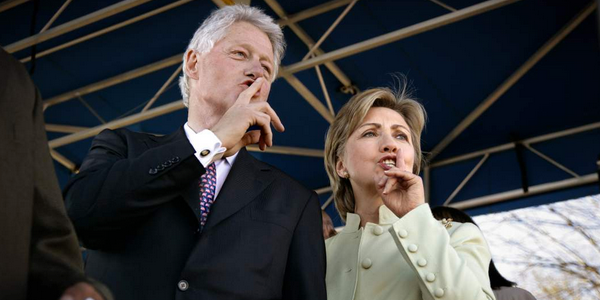 Today’s Q&A is with Roger Stone, a seasoned political operative and pundit. A veteran of eight national presidential campaigns, he served as a senior campaign aide to three Republican presidents before leaving the GOP for the Libertarian Party. He is author of the New York Times bestseller, “The Man Who Killed Kennedy: The Case Against LBJ,” and has written for Fox Opinion, Breitbart News, the Daily Caller’s StoneZone.com and the op-ed page of the New York Times. A well-known voice in politics for more than 40 years, Roger Stone often gives insights on behind-the-scenes political agendas on Fox News, CNN, CNBC and MSNBC.

WND: Recently in Politico, you described your forthcoming book, “The Clintons’ War on Women,” as “The definitive expose’ on Bill, Hillary and Chelsea Clinton. Raw, shocking and true.”

Is your description just hype to stimulate pre-sales since the book will not be released until Oct. 13, or are you and your co-author Robert Morrow really breaking new ground that will make headlines and possibly impact the 2016 race?

ROGER STONE: The mainstream media have suppressed the shocking truth about the Clintons and the way they have climbed over the backs of innocent women, men and children in their quest for power and wealth. Most people who read this book will learn shocking facts for the first time. Clinton’s apologists will try to dismiss it as “old news.” News is not “old” to those who never heard it. The book is not about Whitewater or Monica Lewinsky and Bill Clinton and a cigar. It is the true story of serial rape, intimidation, violence, terror tactics, drugs, lies, greed, cover-up and ambition. It’s blunt, ugly and shocking. It’s the definitive expose on Bill, Hillary and Chelsea Clinton. Bill and Hillary Clinton are the penicillin-resistant syphilis of our political system.

WND: Can you tell readers (or at least hint) at some of the headlines this book is likely to generate?

ROGER STONE: Bill Clinton’s record of serial rape and how Hillary ran the terror campaign to intimidate his victims into silence or sign false denials. How Bill Clinton viciously bit the lower lips of his multiple rape victims as a signature bid to remain silent. Which co-president really gave the “go” order in Waco that killed 76 people, mostly women and 26 children? Bill’s abandoned African-American son and the non-existent DNA test reported by the Washington Post that supposedly exonerated Bill. A close-up look at the Clinton’s relationship with pedophile Jeff Epstein. Is Bill’s right-hand man, the now estranged Doug Band, the man who knows too much? How a recent DNA test shows Bill isn’t Chelsea’s biological father and who is. The identity of Bill Clinton’s real father (not the one listed in his Wiki profile).

WND: When describing your forthcoming book on Politico, you are also quoted as saying, “It’s Ed Klein and ‘Clinton Cash’ on steroids.”

As you know, Ed Klein’s 2014 book, “Blood Feud: The Clintons vs. the Obamas,” was widely criticized for using anonymous sources. Does your book have real quotes from real people who go “on record” in what Amazon describes as a “tell-all, exposing the appalling, unvarnished and ugly truth about the Clintons”?

Incidentally, Ed Klein is an honest and meticulous reporter, and many of [his sources] will only speak without attribution.

WND: It is no secret that an integral part of Hillary Clinton’s 2016 White House battle plan is to reignite the Republican’s “War on Women.” This “faux war” helped Democrats win the 2012 presidential election when Obama won the women’s vote by a margin of 11 percentage points. It is well established that, to win in 2016, Republicans must close this gender gap.

Therefore, is the goal of your book, as witnessed by the title, to turn women against Hillary Clinton? As a longtime Republican political operative, is this your attempt to deflate her “girl power” campaign and derail her from making history as the first female president? Are you ready for all the Clinton backlash?

ROGER STONE: Hillary as advocate for women is a joke. The Clintons’ activities have not only included Bill’s physical rape of women, but also Hillary’s degradation and psychological rape of women whom Bill has assaulted. Hillary, it will be seen, authorized the heavy-handed private detectives who terrorize Bill’s victims into silence. Behind the scenes, she calls them “sluts,” “whores” and “b–ches,” blaming and shaming them for the unwanted physical attentions and violence of Bill. This is the “advo­cate for women and girls”?

Hillary’s history of paying women less than men and her pocketing millions of dollars from Islamic regimes that oppress women, a convicted sex criminal and a foreign leader known as a pedophile with a dozen underage girls in his harem, all prove Hillary is a fraud when it comes to women.

The book isn’t about me or my colorful co-author Robert Morrow. We are hardly saints. But neither of us is running for president. Nor is the book about consensual sex or infidelity. It’s about rape, sexual assault and sex with underage girls. That crosses a line, even for a libertine like me. It’s about would-be President Hillary Clinton’s role in covering it up. The book will rise or fall on its own. The Clinton’s goons will attack us as partisans, misogynists and worse. Let the reader decide. 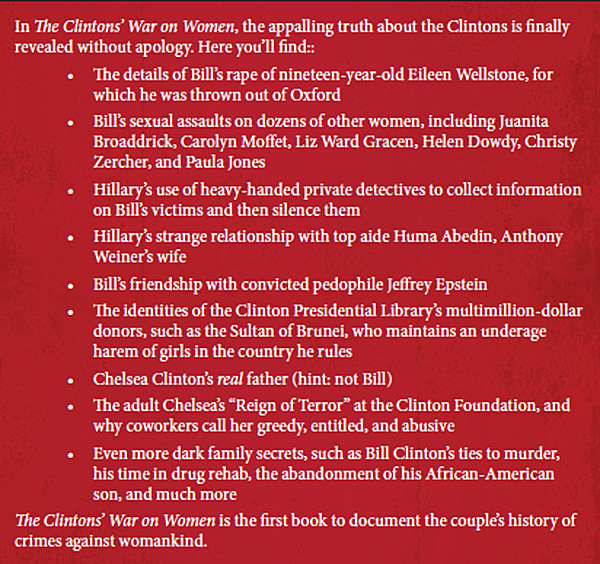