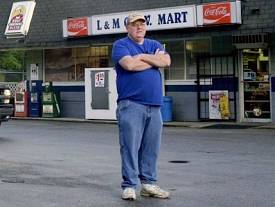 Last October, in response to the outrage provoked by “structuring” cases in which the government took people’s money because their bank deposits were too small, the IRS said it would no longer do that unless there was evidence that the money came from an illegal source. In March the Justice Department announced a similar policy for seizures based on structuring, which entails making deposits of less than $10,000 with the intent of evading bank reporting requirements. Yet both the IRS and the DOJ are continuing to pursue the forfeiture of $107,000 that belongs to Lyndon McLellan, the owner of a convenience store in rural North Carolina, based on nothing but suspicion of structuring.

As in other structuring cases, McLellan lost his money because of well-intentioned but bad advice from a bank teller. The teller told McLellan’s niece, who usually handled L&M Convenience Mart’s deposits, she could save the bank burdensome paperwork by keeping the deposits below $10,000, the reporting threshold. Based on the resulting pattern of deposits, the IRS cleaned out McLellan’s bank account a year ago, even though there was no evidence that the money came from anything other than his perfectly legal business, which combines a store with a gas station and restaurant. The Institute for Justice, which is suing the IRS and the DOJ on McLellan’s behalf, notes that “the government filed its forfeiture complaint in December 2014, two months after the IRS announced it would not forfeit money in cases like this one.”

This is not the first time the IRS has seemed to violate its new policy, and the contradiction did not go unnoticed. On February 5, IRS Commissioner John Koskinen testified before the oversight subcommittee of the House Ways and Means Committee. Prior to the hearing, I.J. provided legislators with copies of the seizure affidavit and forfeiture complaint in McLellan’s case. Without naming McLellan, Rep. George Holding (R-N.C.), a former U.S. attorney, asked Koskinen about the seizure:

Holding: Are you saying that under the new policy, you have to aver that we have probable cause to believe an illegal act is taking place other than the act of structuring?

Holding: You sure about that?

Koskinen: That’s what I’m advised by the people who run the Criminal Investigation Division.

Holding: The staff pulled for me a case from North Carolina, from my former prosecutorial district, after your policy change. And I’ve read through the affidavit and the associated documents. There’s no allegation of illegal activity, other than the act of structuring…

Koskiken: If that case exists, it’s not following the policy.

Once Koskinen’s position came to the attention of Steve West, the federal prosecutor handling the case, the government apologized and gave McLellan his money back. Just kidding. Actually, West was pissed off that someone had dared to share documents from the case with members of Congress. After McLellan and his accountant emailed West video of Holding’s exchange with Koskinen, the prosecutor responded with a rebuke:

I’m a bit concerned. At your request, I provided you a copy of the application for seizure warrant, which remains under seal with the Court, and now it appears it has been made available to a congressional committee? I do not know who did that, and I am accusing no one, but it was not from our office and could only have come from your clients. That was certainly not my intent in making this available. Whoever made [the document] public may serve their own interest but will not help this particular case.

Your client needs to resolve this or litigate it. But publicity about it doesn’t help. It just ratchets up feelings in the agency.

My offer is to return 50% of the money. The offer is good until March 30th COB.

I.J. notes that the rationale for filing seizure documents under seal is to avoid tipping off the owner, lest he take his money and run. But in this case, the seizure had already happened, and the government had provided the documents to McLellan. “Sealed filings are intended to promote legitimate law enforcement interests,” I.J. says, “not to allow prosecutors to evade public scrutiny.” And it’s more than a little unseemly for a prosecutor to imply that the bad feelings caused by such scrutiny might affect the outcome of a case.

Innocent property owners, deprived of the funds they need to run their businesses and pay their lawyers, often end up accepting deals like the one McLellan was offered, figuring half a loaf is better than none. But McLellan, with pro bono help from I.J., is determined to fight. “It took me 13 years to save that much money,” he says, “and it took fewer than 13 seconds for the government to take it away.”