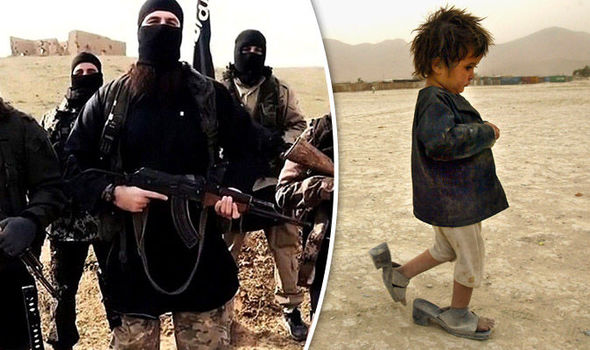 The twisted group decapitated the defenseless little girl in what they described as a ‘punishment’ for her mother’s behaviour. The youngster was brutally murdered in Raqqa, Syria, ISIS’s de-facto capital in the war- torn country.

A vile ISIS fighter overheard the exchange and allegedly said: “Since you swore to Allah you should behead her.” And when she refused to kill her child, the depraved jihadis did it instead. The witness added: “But they beheaded the little girl and soaked her mother’s hands in her daughter’s blood.”

Harrowing photos, which Express.co.uk have chosen not to publish, showed the girl’s horrifying demise.

The witness, who managed to escape the barbaric group, said: “They rape women, take children to war, loot houses and threaten people in Raqqa with beheadings if they don’t agree with their daughters’ marriage with the ISIS members.”