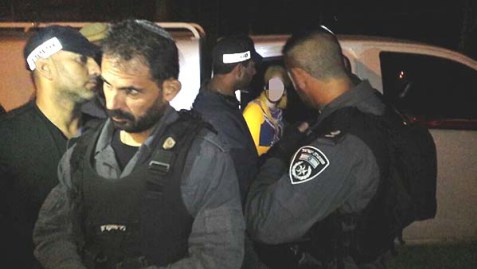 Why are these leftist, homosexual perverts forcing a gay parade in the Holy land? To rub it in the faces of religious Jews and Muslims?

According to the legal aid society Honenu, police have been raiding the homes of rightwing activists, warning them against attending and protesting the parade.

According to attorney Itamar Ben Gvir, despite the fact that an Israeli court refused to sign restraining orders without the shred of a proof against individuals, police nevertheless showed up in their homes and demanded that they sign an agreement to stay away from the parade.

“The police have forgotten that the right of free speech also includes the right to protest the gay pride parade,” Ben Gvir said, noting that “although the activist who was made to sign had no intention of going there, and certainly had not planned to, the very notion of knocking on people’s doors and asking them to sign such a prohibition is contrary to the laws of the State of Israel.”

At 2 AM Friday, police officers and detectives raided the home of a family in Samaria and detained for interrogation the mother, a nursery school teacher and mother of four. The forces came equipped with a search order signed by Tel Aviv Magistrate Court Judge Shlomit Ben-Itzhak, woke up the family and confiscated the woman’s smartphone and computer. Then they took the woman for an interrogation without any court order, with her husband and baby tagging along.

In her interrogation, the woman shared that she had no idea there was going to be a gay pride parade, and that she has no connection to any related activity.

It is obvious that police are terrified of a repeat of the Jerusalem parade murder, where they allowed near the parade a known violent attacker of gays, who had just been released from a long prison term for attacking marchers in the 2005 Jerusalem gay pride parade. It’s bewildering to think what the police might do in preparation for the Jerusalem gay pride parade in two months. Rightwing activists are encouraged to give interviews and publish blog entries in favor of acceptance, embracing the other, and respecting people’s right to experiment with their sexuality — or face jail.