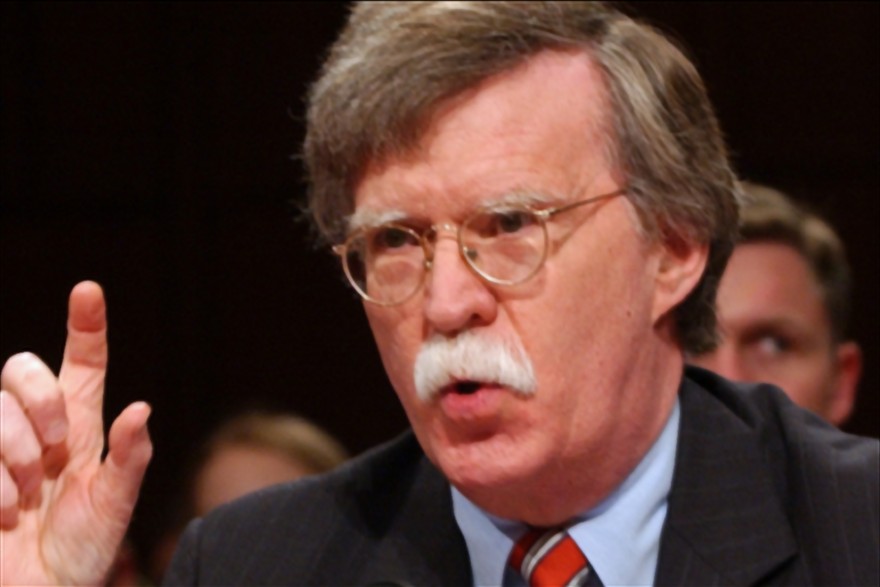 Former U.S. Ambassador to the United Nations John Bolton issued a dire warning about America’s military might, suggesting during a televised interview the President Donald Trump administration might want to beef up missile defense.

Should North Korea strike, America may not be able to fully fend off attack, Bolton said.

“The argument is that North Korea is very close to having the capability of dropping nuclear warheads on the Unite States via ballistic missile,” he said, to Fox Business Network.

That’s in part, thanks to Barack Obama, and this prior administration’s team of merry diplomats who would talk a soft talk and carry a cupcake.

As such, if North Korea struck Los Angeles with a nuclear warhead, Bolton said it wasn’t entirely evident that America could protect itself and retaliante with “adequate missile defense” moves.

Bolton went on: “If we had an effective national missile defense program I’d be confident we could [retaliate] but after eight years of the Obama administration funding of what the Bush administration had started was gutted basically.”

He also said in a penned piece for the Wall Street Journal, reprinted at the Gatestone Institute, that America needs a post-ISIS stragegy — and pronto.

“The headlines out of Syria are eye-catching: There are signs the Assad government may be planning another chemical attack. American pilots have struck forces threatening our allies and shot down a Syrian plane and Iranian-made drones. The probability of direct military confrontation between the U.S. and Russia has risen. Yet the coverage of these incidents and the tactical responses that have been suggested obscure the broader story: The slow-moving campaign against Islamic State is finally nearing its conclusion — yet major, long-range strategic issues remain unresolved.

The real issue isn’t tactical. It is instead the lack of American strategic thinking about the Middle East after Islamic State. Its defeat will leave a regional political vacuum that must be filled somehow. Instead of reflexively repeating President Obama’s errors, the Trump administration should undertake an “agonizing reappraisal,” in the style of John Foster Dulles, to avoid squandering the victory on the ground.

First, the U.S. ought to abandon or substantially reduce its military support for Iraq’s current government. Despite retaining a tripartite veneer of Kurds, Sunni Arabs and Shiite Arabs, the capital is dominated by Shiites loyal to Iran. Today Iraq resembles Eastern Europe in the late 1940s, as the Soviet anaconda tightened its hold. Extending Baghdad’s political and military control into areas retaken from ISIS simply advances Tehran’s power. This cannot be in America’s interest.

Iraq’s Kurds have de facto independence and are on the verge of declaring it de jure. They fight ISIS to facilitate the creation of a greater Kurdistan. Nonetheless, the Kurds, especially in Syria and Turkey, are hardly monolithic. Not all see the U.S. favorably. In Syria, Kurdish forces fighting ISIS are linked to the Marxist PKK in Turkey. They pose a real threat to Turkey’s territorial integrity, even if it may seem less troubling now that President Recep Tayyip Erdogan’s plans have turned so profoundly contrary to the secular, Western-oriented vision of Kemal Atatürk.

Second, the U.S. should press Egypt, Jordan and the Gulf monarchies for more troops and material assistance in fighting ISIS. America has carried too much of the burden for too long in trying to forge Syria’s opposition into an effective force. Yet even today the opposition could charitably be called “diverse.” It includes undeniably terrorist elements that are often hard to distinguish from the “moderates” the U.S. supports. Getting fresh contributions from Arab allies would rebalance the opposition, which is especially critical if the U.S. turns away, as it should, from reliance on the Iraqi forces dominated by Tehran.

Third, the Trump administration must take a clear-eyed view of Russia’s intervention. The Syrian mixing bowl is where confrontation between American and Russian forces looms. Why is Russia active in this conflict? Because it is aiding its allies: Syria’s President Bashar Assad and Iran’s ayatollahs. Undeniably, Russia is on the wrong side. But Mr. Obama, blind to reality, believed Washington and Moscow shared a common interest in easing the Assad regime out of power. The Trump administration’s new thinking should be oriented toward a clear objective: pushing back these Iranian and Russian gains.

Start with Iran. Tehran is trying to cement an arc of control from its own territory, through Baghdad-controlled Iraq and Mr. Assad’s Syria, to Hezbollah-dominated Lebanon. This would set the stage for the region’s next potential conflict: Iran’s Shiite coalition versus a Saudi-led Sunni alliance.

The U.S.-led coalition, enhanced as suggested above, needs to thwart Iran’s ambitions as ISIS falls. Securing increased forces and financial backing from the regional Arab governments is essential. Their stakes are as high as ours — despite the contretemps between Qatar and Saudi Arabia (and others) — but their participation has lagged. The U.S. has mistakenly filled the gap with Iraqi government forces and Shiite militias.

Washington is kidding itself to think Sunnis will meekly accept rule by Iraq’s Shiite-dominated government or Syria’s Alawite regime. Simply restoring today’s governments in Baghdad and Damascus to their post-World War I boundaries would guarantee renewed support for terrorism and future conflict. I have previously suggested creating a new, secular, demographically Sunni state from territory in western Iraq and eastern Syria. There may well be other solutions, but pining for borders demarcated by Europeans nearly a century ago is not one of them.

At the same time, the U.S. must begin rolling back Russia’s renewed presence and influence in the Middle East. Russia has a new air base at Latakia, Syria, is involved in combat operations, and issues diktats about where American warplanes in the region may fly. For all the allegations about Donald Trump and Russia, the president truly in thrall to Moscow seems to have been Mr. Obama.

Russia’s interference, particularly its axis with Mr. Assad and Tehran’s mullahs, critically threatens the interests of the U.S., Israel and our Arab friends. Mr. Assad almost certainly would have fallen by now without Russia’s (and Iran’s) assistance. Further, Moscow’s support for Tehran shatters any claim of its truly being a partner in fighting radicalIslamic terrorism, which got its modern start in Iran’s 1979 revolution. Both Iran and the Assad regime remain terror-sponsoring states, only now they are committing their violence under Russia’s protective umbrella. There is no reason for the U.S. to pursue a strategy that enhances Russia’s influence or that of its surrogates.

As incidents in Syria and Iraq increasingly put American forces at risk, Washington should not get lost in deconfliction negotiations or modest changes in rules of engagement. Instead, the Trump administration should recraft the U.S.-led coalition to ensure that America’s interests, rather than Russia’s or Iran’s, predominate once ISIS is defeated.