John Kerry Wishes We Had a Leader Like Iran’s Dictator 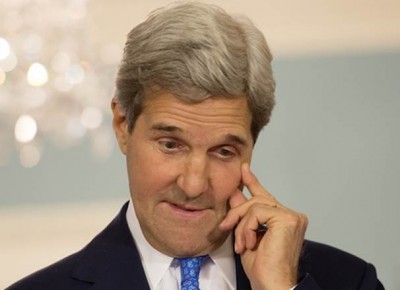 John Kerry has a disturbing habit of kissing up to foreign despots, particularly the Middle Eastern variety. Back in 2011, when the Syrian civil war was still just mass demonstrations, he went on record praising Basham al-Assad. Then, there was the time earlier this year he extended an over the top message of condolences to the Iranian Supreme Leader Hassan Rouhani over the loss of his mother.

Now, Kerry’s back in the news for kissing up to the Iranians again. According to Adam Kredo of the Washington Free Beacon, here is what our Secretary of State reportedly said about Ayatollah Khamanei:

Ayatollah Alam al-Hoda claimed during Friday prayer services in Iran that in negotiations over Tehran’s contested nuclear program, Kerry told the country’s foreign minister that he “wished the U.S. had a leader like Iran’s supreme leader,” according to a Persian-language report on the remarks published by the Asriran news site.

“In the negotiations Kerry told [Iranian Foreign Minister Javad] Zarif that he [Kerry] wished U.S. had a leader like Iran’s supreme leader,” according to Alam al-Hoda, who is a senior member of the Iran’s powerful Assembly of Experts.

It’s entirely possible that this is just Iranian propaganda, and would not rule it out. Still, based on Kerry’s track record, would it surprise anyone if he actually said these comments? The Obama administration is denying it, but that’s about the only choice they have, given how much of the rest of America feels about the ayatollahs.

We talk a lot about how Democrats have the disturbing tendency of abandoning the democratic process when it doesn’t suit them. The Obama administration has proven themselves to be masters of this art. Sometimes, they let the mask slip and show us just how they really feel about America’s form of government. Iran might masquerade as a republic, but nothing happens there without the approval of the ayatollahs. An incident like this also shows the disturbing tendency among those on the Left to praise and admire brutal dictators.

And again, even if this incident is embellished some for Iranian propaganda, such sentiments coming from Secretary of State Kerry would be hardly surprising.