Jon Stewarts replacement is anti-Semite Trevor Noah: Act like a Nazi, get your own prime-time TV show

Yesterday, the Jewish Telegraphic Agency appeared to be the first media outlet to notice a disturbing tweet from Comedy Central’s new hire Trevor Noah, who is pegged to replace Jon Stewart as host of the Daily Show:

South Africans know how to recycle like israel knows how to be peaceful.

Behind every successful Rap Billionaire is a double as rich Jewish man. #BeatsByDreidel

Xbox and Playstation players are like Jews and Muslims. They are so similar but they hate each other so much!

RT @Trevornoah: Messi gets the ball and the real players try foul him, but Messi doesn’t go down easy, just like jewish chicks. #ElClasico

Almost bumped a Jewish kid crossing the road. He didn’t look b4 crossing but I still would hav felt so bad in my german car!

@khayadlanga I knew he was Jewish cause his parents across the road looked Jewish. Oh and they were outside a Shul.

JTA also found this from Noah’s Facebook page, which appears to show Noah as having been present at an anti-Israel rally in front of the White House: 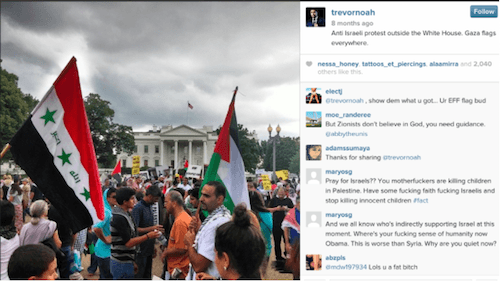 I just don’t see Comedy Central standing behind a host they have nothing invested in besides eight hours of PR after they review that “Jewish chicks” tweet, among the others. And of course, other examples are sure to appear in the next few hours.

What do you think: does Noah survive the day in his new job?