Kids Get School Supplies from Groups Associated with Terrorism 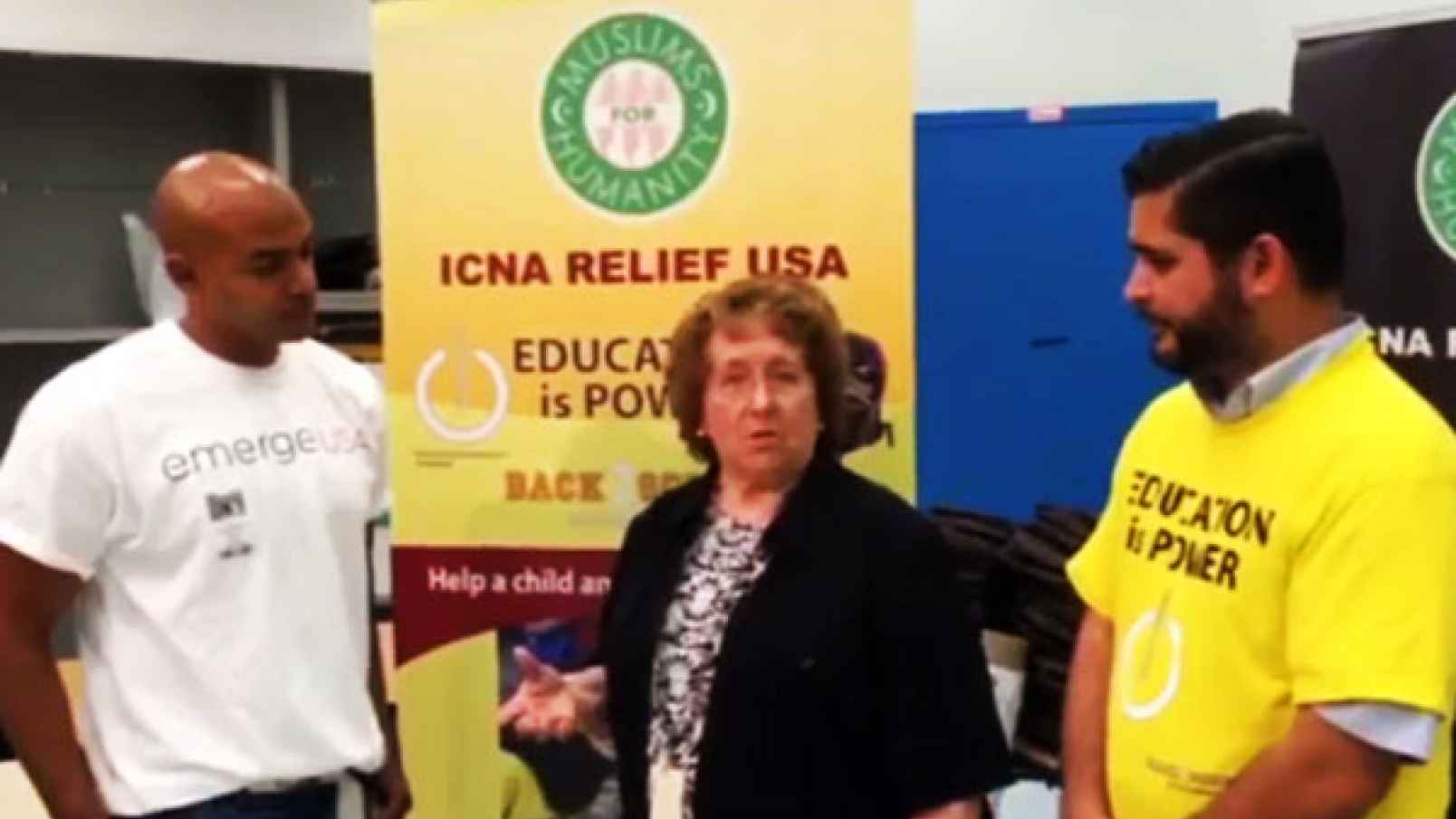 It’s back to school time for kids. New teacher, new friends and new costs for school supplies – something parents know can be fairly expensive! To exploit this financial concern, this past July, Islamist groups, including ICNA, CAIR and Emerge USA, along with Broward County School Board Member Ann Murray, participated in a program at Miramar Elementary Public School to give away school supplies to children in need. While the children weren’t old enough to understand who they were accepting gifts from, parents should be alarmed to discover the tainted favors came from groups associated with terror and bigotry.

The flyer for the event reads, “A Project of ICNA Relief. BACK2SCHOOL GIVEAWAY. HELP US HELP THE CHILDREN IN NEED.” The sponsors listed on the flyer include: the Florida chapter of the Council on American-Islamic Relations (CAIR), and the Florida Islamic Association (FIA).

ICNA Relief is the main charity of the Islamic Circle of North America (ICNA), the American affiliate of South Asian Islamist group Jamaat-e-Islami. Jamaat-e-Islami’s militant wing, Hizbul Mujahideen, owned the Pakistani compound where Osama bin Laden was killed in. ICNA has been linked to terrorist financing and has used the web to promote a number of terrorist groups, including Hamas, al-Qaeda, Hezbollah and the Taliban. ICNA conducts annual functions along with the Muslim American Society (MAS), a group that was recently named to the United Arab Emirates (UAE) government list of international terrorist organizations.

CAIR, like MAS, was named to the UAE list of terror groups. CAIR was established, in June 1994, as one of four groups under the leadership of then-global head of Hamas, Mousa Abu Marzook, who was residing in the US at the time. Since CAIR’s founding, a number of representatives for the group have been imprisoned in and/or deported from the US for reasons related to terrorist activity. CAIR itself was named a co-conspirator by the US government for two federal trials dealing with the financing of Hamas. In August 2014, CAIR-Florida Executive Director Hassan Shibly tweeted, “Israel and its supporters are enemies of God.”

FIA calls itself a “community-building” organization, whose goal is to “collaborate” with Islamic organizations, schools and mosques. This year alone, FIA has run events with ICNA Relief and MAS as well as different radical mosques, including the Islamic Center of Boca Raton (ICBR) and Nur-ul-Islam, where the kids’ backpacks being given away at ICNA Relief’s BACK2SCHOOL event were assembled.

ICBR has a long list of terrorist connections. A co-founder of ICBR, Bassem Alhalabi, was charged by the U.S. government with the illegal export of a $13,000 military-grade thermal imaging device to Syria. Another co-founder, Syed Khawer Ahmad, was a website developer and webmaster for Hamas in Gaza. One former imam of ICBR, Ibrahim Dremali, was placed on the federal “no-fly” list, and another, Muneer Arafat, admitted under oath that he was an affiliate of Palestinian Islamic Jihad. A member of the mosque, Rafiq Abdus Sabir, was sentenced to 25 years in prison for conspiring to provide material support to al-Qaeda.

Nur-Ul-Islam, located in Cooper City, Florida, also has significant ties to terrorism. A former member of the mosque’s Islamic Affairs Council and ex-Vice President of its children’s school, Nur-ul-Islam Academy (NUIA), Raed Musa Awad, was the Florida representative for the Hamas charity, Holy Land Foundation for Relief and Development (HLF), and oversaw the conversion to Islam by convicted terrorist “Dirty Bomber” Jose Padilla. The website of NUIA previously contained links to violent, anti-Semitic and anti-Christian material, including having a link to islamway.com, a website that encouraged its viewers to donate money to Hamas.

Not listed on the flyer, but also taking part at the event was Emerge USA, an Islamist group that attempts to dupe politicians into attending its functions by seducing them with a “Muslim vote.” Regardless of the group’s patriotic-sounding name, Emerge is nothing more than a front for anti-American and anti-Israeli extremists.

A founder and co-chair of Emerge (and ex-CAIR lawyer), Khurrum Wahid, is a South Florida attorney who has become known for representing various high profile terrorists, including members of al-Qaeda and financiers of the Taliban. According to the Miami New Times, Wahid himself was placed on a federal terrorist watch list in 2011. Co-founder and trustee of Emerge, Saif Ishoof, is a former organizer and contact for the extreme anti-Israel group, March for Justice. Emerge lecturer, Sayed Ammar Nakshawani, is a follower of former Iranian terror leader Ayatollah Ruhollah Khomeini and has previously called for the destruction of Israel.

One of the contacts for the ICNA Relief BACK2SCHOOL event was the Outreach Coordinator of the Florida chapter of ICNA Relief, Taha Qureshi. Last month, Qureshi posted a photo on his Facebook page making light of what appears to be a Muslim man beating his two children with one of his slippers, as the children cower in fear. The other contact for the event, Emerge National Government Affairs Director Tamara Ayon, is the former Executive Director of the Broward Democratic Party.

Along with Rauf, participating at the event were Emerge USA National Executive Director Tamim Chowdhury and Broward County School Board Member Ann Murray. A video for the event was made featuring the three.

On the video, Murray, who acted as Rauf and Chowdhury’s “useful idiot,” stood centered between the two men, with a sizeable ICNA Relief banner hanging behind her. She spoke for more than half of the two-and-a-half minute piece, taking a large chunk of the time to praise the Islamist organizers of the event and making sure to announce her government title and the district she represents.

The video was filmed (and the event took place) at Miramar Elementary School, a taxpayer-funded public school located in Broward County. Under the cynical guise of charitable intent, public schools are a prime target for Islamist infiltration.

The children who received the “gifts” surely were unaware of the sordid backgrounds of the organizations involved in ICNA Relief’s function. However, School Board Member Murray and the administration at Miramar Elementary should have known better. They allowed the children they are supposed to look after to be exposed to and be indoctrinated by Islamist groups with dangerous agendas and well-documented terrorist ties.

No doubt, Murray and Miramar will say that this was done for a good cause, but disguising a sinister objective as altruistic giving does not make it good. Indeed, the murder and mayhem generated by those associated with these organizations and/or their leadership can never be viewed as anything but evil.

A School Board member and a number of children were used as pawns to legitimize hatred and violence from radical Muslim groups attempting to portray themselves as do-gooders in the community.

These Islamist groups should be banned from taking part in any future events held in Broward’s public schools or any government-run structure in Broward County, Florida. And Murray and the Miramar Elementary administrators should apologize to the parents of the students they represent for subjecting their kids to these insidious organizations and for potentially endangering their well-being.

If you wish to contact School Board Member Ann Murray to discuss this matter, you can do so by calling her at 754-321-2001 or e-mailing her at [email protected].

If you wish to contact Miramar Elementary Principal Joanne Schlissel, you can do so by calling her at 754-323-6550 or e-mailing her at [email protected].

Please act respectfully in any and all communications with these individuals.