As Newsbusters reported last week, the founder of the Human Rights Campaign (HRC), which markets itself as the nation’s largest LGBT rights organization, was arrested Nov.18 for allegedly sexually abusing a 15-year-old boy. Terrence Bean, 66, is a Democratic money man, prominent liberal activist and Obama ally. Bean’s 25-year-old former boyfriend was also charged in the crimes.

According to an op-ed by former WSJ editor Brett M. Decker in USA Today,

The scandal is escalating. Thursday, according to local media, Kiah Loy Lawson, allegedly 66-year-old Bean’s 25-year-old former boyfriend, was arrested by the Portland Sex Crimes Unit for sexually abusing the same boy. After the relationship between the two men ended, Lawson went public with claims that Bean had a practice of secretly videotaping himself having sex with others.

Since the story broke Wednesday, local media and conservative media have covered it. The Washington Post ran a brief AP story on the arrest, but the networks have yet to report on it.

And despite the media’s love of sex scandals – think Bill Cosby – they’re unlikely to break their silence anytime soon.

Bean donated over $500,000 to President Obama among a laundry list of donations to various Democratic candidates like Kay Hagan and the party itself in the past two years, according to OpenSecrets.org. 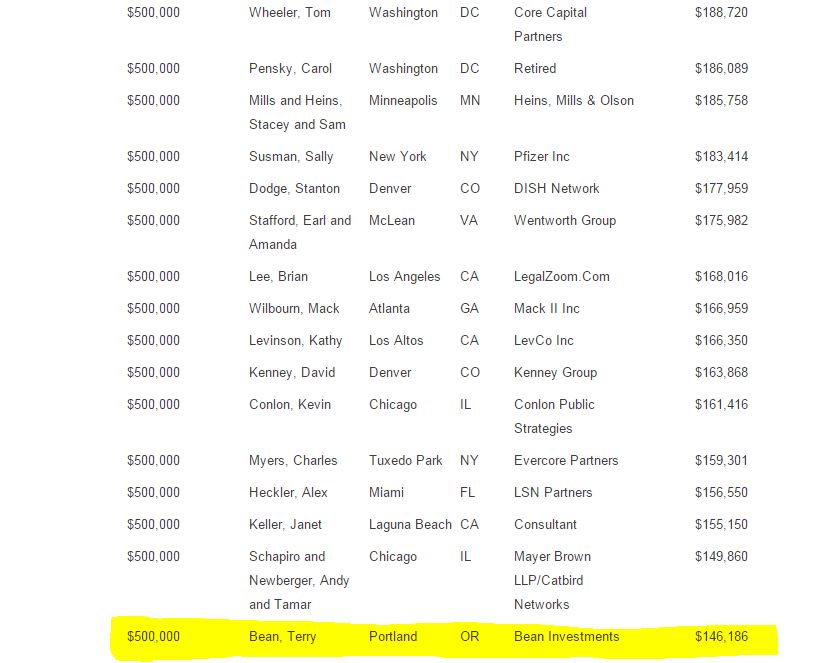 Bean was listed on the political donations tracking website as one of Barack Obama’s financial “bundlers.” A New York Times chart lists Bean as giving more than $1 million dollars since 2007 to Barack Obama.

Unsurprisingly, Bean’s been chummy with the Obama Administration. During the HRC’s 2008 Gala in D.C., Bean predicted that the upcoming election of then Sen. Barack Obama would ignite a “truly, truly profound change – change that could transform our nation. It is now within our grasp. The time is now. In four weeks, we will know whether breakthroughs that we have worked for for forty years are possible.”

Bean was on Sen. Obama’s National Finance Committee and was a guest at the 2012 White House Correspondents Dinner. For his part, President Obama keynoted HRC’s annual Galas in 2009 and 2011, thanking his “friend and supporter Terry Bean” in 2009.

Numerous photos of Bean with the President have surfaced as well, including aboard Air Force One and at the White House Christmas party.

HRC is a fixture of the liberal establishment. It’s received $600,000 from George Soros, and it’s annual Gala each October in Washington D.C., features a who’s-who of leftwing politicians and Hollywood celebrities. For the media, HRC is a go-to on gay issues and Christian-bashing. In September, HRC published a report titled, “Exposed: The Export of Hate” highlighted several members of “the radical right” the group wants to demonize.