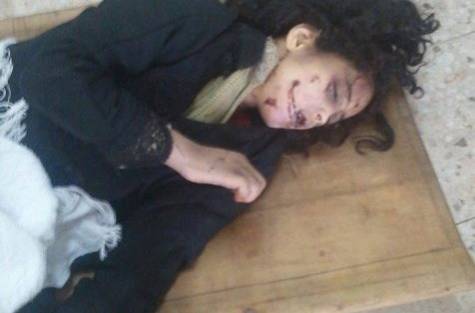 The official told Gulf News that the father used different methods of torture to force her into admitting having sex with another man, including putting an iron to her skin.

This is “honor” under Islam.

By: Saeed Al Batati, Correspondent, December 30, 2014, Gulf News (thanks to Religion of Peace)

Man admits to torturing and killing daughter for allegedly having sex

Sana’a: A Yemeni father callously tortured and killed his daughter, 10, for allegedly committing adultery in the northern Dhamar province, a local official who questioned the man told Gulf News on Tuesday.

On the weekend, Yemenis on social media widely circulated a photo of a tortured girl who was found dead by shepherds in a rugged area in the northern province of Ibb.

Within hours, police found out that the girl was killed by her father.

Colonel Mohammad Qassem Al Hadi, the director of Dhamar’s Criminal Investigation Department, said that the man admitted that he brutally tortured and shot her four times with his rifle.

“We found a video clip in his mobile phone asking his daughter to confess to her mistake. The girl was bleeding and crying,” he said.

The official told Gulf News that the father used different methods of torture to force her into admitting having sex with another man, including putting an iron to her skin.

During the investigation, the man admitted that he threw his daughter off a cliff in the Samara Mountains in Ibb province after severely beating her.

“The father divorced his wife six years ago. He has two daughters and usually spends time moving from one country to another,” Al Hadi said.

The graphic photo of the dead girl sparked outrage on social media and local media outlets with some people demanding the execution of the father.

“If I were a judge, I would have sentenced him to death in the first session.” said Ali Al Bukhiti, an Al Houthi spokesman wrote on Tuesday on his Facebook page.

“This man must be cut into pieces and thrown to dogs,” said Mohammad Said, a Yemeni man on social media.