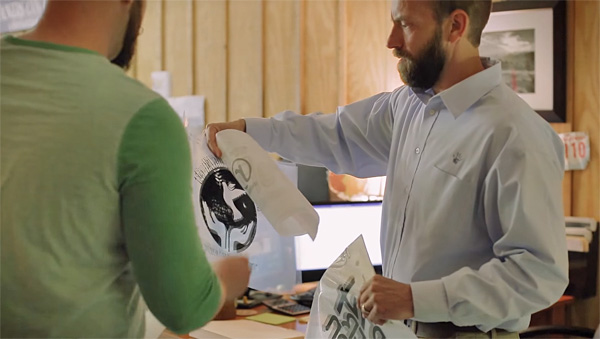 The left has never been “tolerant” of others’ views unless your gay, black, or Muslim.

Freedoms of religion and speech, protected in the U.S. by its Constitution and recognized widely in other parts of the free world in law and practice, are under attack again, this time in Kentucky where a local commission is demanding – at the request of a homosexual organization – that a printer produce T-shirts with a message that violates his Christian faith.

The fight now is before the Kentucky Court of Appeals over whether Blaine Adamson, the managing owner of Hands-On Originals, in fact has the rights that the U.S. Constitution is supposed to protect for him. Or whether he can be forced by homosexuals to produce a message which conflicts directly with his deeply held religious beliefs.

“Protecting Blaine’s freedom affirms everyone’s freedom, no matter the nature of their beliefs or convictions,” said ADF Senior Counsel Jim Campbell. “The government shouldn’t be able to force citizens to create speech that conflicts with their deepest convictions, and the trial court’s decision rightly affirmed that.”

Adamson had declined to print shirts promoting a “gay pride” event held by a “Gay and Lesbian Services Organization” in the Lexington-Fayette region. He explained it was because of the message that contradicted his faith. In fact, he wasn’t even aware of the sexual lifestyle choices of those making the request.

Despite that, the homosexuals filed a discrimination complaint and the Lexington-Fayette Urban County Human Rights Commission ordered Adamson to violate his faith. A local court decision reversed that, but the commission then took the fight to the Kentucky Court of Appeals.

The Alliance Defending Freedom, which has been working with Adamson, now has filed a brief there.

ADF explains that Adamson routinely declines to do print jobs when the message violates his faith, rejecting at least a dozen in recent years. Instead, he offers referrals to other print shops for those customers. Those subjects included a strip club, a sexually explicit video and a message that included violence.

So that’s what he did when the GLSO wanted to promote a “gay pride” event.

Instead of recognizing Adamson’s constitutional rights, however, the GLSO filed its complaint, which ultimately failed in the district court.

The ADF argues that the decision will impact all people, not just those of faith. For example, a lesbian printer in another state endorsed Adamson in the fight, because a ruling against him could then be used to force her to produce messages with which she disagrees, too.