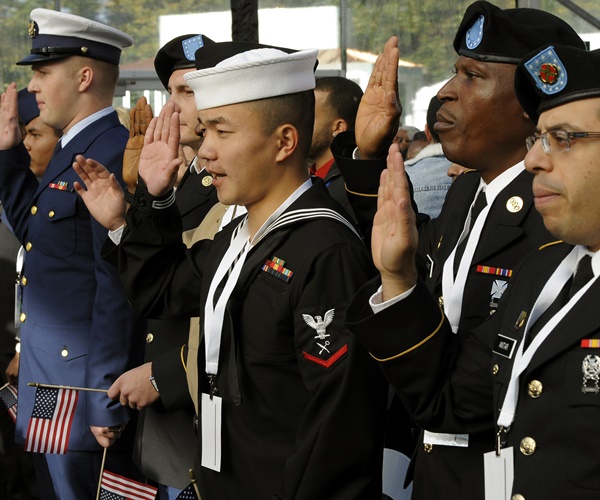 Ex-Rep. Tom Tancredo is blasting a “radical” Obama administration order allowing immigrants to opt out of a promise to defend America when they take an Oath of Allegiance to become naturalized citizens.

The U.S. Citizenship and Immigration Services announced the changes July 21, 2015 – and Congress did nothing to stop it, the former Colorado lawmaker charges in a column for Breitbart.com.

The USCIS website outlined the changes, declaring that: “Reciting the Oath is part of the naturalization process. Candidates for citizenship normally declare that they will ‘bear arms on behalf of the United States’ and ‘perform noncombatant service in the Armed Forces of the United States’ when required by the law.”

“A candidate may be eligible to exclude these two clauses based on religious training and belief or a conscientious objection,” it instructs.

Tancredo was livid about the change.

“But Obama’s appointees at the USCIS think that is too much to ask of the 18.7 million estimated legal immigrants eligible today for eventual naturalization or the 750,000 who will be naturalized in the coming year.”

He also charged Congress sat idly by while the change went into effect.

“This radical change was implemented while Congress slept,” he writes. “Like other Obama actions to undermine our immigration laws, the Republican-controlled Congress has not used its constitutional powers to reverse the administrative action.”

“Most Americans will think it extremely odd that the USCIS action with regard to the Oath of Allegiance is not illegal,” he adds.

“But the fact is, unelected bureaucrats at the USCIS can change the wording of the Oath without approval of the people’s representatives in Congress. Strange as it sounds, the law as it stands today allows USCIS bureaucrats great leeway in managing the Naturalization process, so Obama’s actions will not be challenged in federal court.”

Tancredo decried that “so far, there is no indication that the Republican leadership” will do anything to change the situation.

“If they won’t even bar Islamic terrorists from the refugee program, why should we expect them to protect the Oath of Allegiance?” he writes.