A kosher restaurant is the scene of the second shooting incident at a Jewish site in Paris this week. 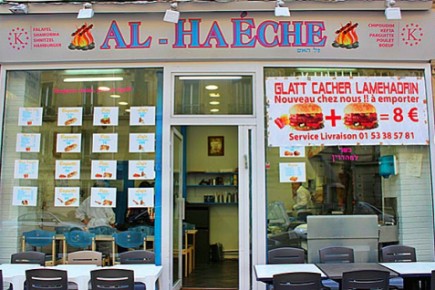 [Jewish Press] – Bullet holes were discovered Wednesday, Dec. 24, in the front window of a kosher restaurant in Paris. The holes in the Al Haeche restaurant appeared to have been made by an air gun, which is also the suspected weapon in a similar attack on a Paris synagogue just two days earlier, on Dec. 22.

The restaurant is less than a mile from the scene of the earlier attack, at David Ben Ichay Synagogue, in Belleville. That bullet went through the synagogue’s office window. The rabbi and his assistant were in the building at the time, but no one was injured. Two suspects are being sought in this incident

Al Haeche serves Israeli food, such as falafel, shwarma and pita. It is in Paris’s 19th arrondissement on Rue Manin.

Sammy Ghozlan, the president of France’s Bureau for National Vigilance Against Anti-Semitism, or BNVCA, declared the incident anti-Semitic because it was deliberately aimed at a kosher restaurant, according to JSSNews.

“Regardless of the projectile, stone, lead ball or ball, the BNVCA considers the incident criminal and anti-Jewish,” Sammy Ghozlan, president of BNVCA, told JSSNews.