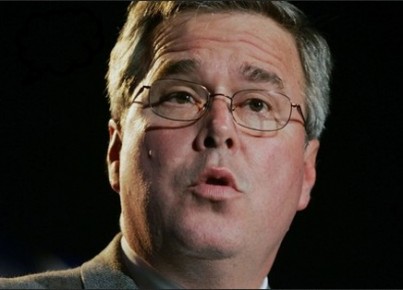 Bush, who is reportedly aiming to raise $100 million before he formally enters the race, will not give a speech at CPAC on Friday and instead participate in a question and answer session with Fox News host Sean Hannity.

“All too often we’re associated with being ‘anti’ everything,” Bush lectured CPAC in 2013. “Way too many people believe Republicans are anti-immigrant, anti-woman, anti-science, anti-gay, anti-worker, and the list goes on.”

Bush is attracting plenty of donors and staffers who wholeheartedly agree with him on the GOP’s “problems.”

The former Florida governor, who has said that illegal immigration is an “act of love” and declared that he was “willing to lose the primary to win the general” presumably without conservative voters, has vowed to be his own man and not be tethered to the views of his political team or his brother, former President George W. Bush.

But money talks. And as conservatives like Richard Viguerie and Morton Blackwell have always said: personnel is policy. Though Bush’s father, George H.W. Bush, tried to bring in as many establishment Republican staffers as he could, Reagan’s brand of “bold” conservatism succeeded because of Reagan’s conservative lieutenants. Like father, like son, Bush seems intent on surrounding himself with advisers who care more about their standing in the Beltway and what the permanent political and media establishments think of them than conservatives.

Republicans told the left-wing BuzzFeed that Bush may be evolving on the gay marriage issue, and there is nothing but upside in his evolution when it comes to fundraising. The outlet detailed that Dave Kochel, Romney’s top Iowa strategist who is likely to be Bush’s national campaign manager and is one of his splashiest hires, is someone who has “grown increasingly convinced” that the GOP “was on the wrong side of the marriage debate, both morally and politically.” Some of Bush’s most prominent political operatives are also pro-gay marriage, as BuzzFeed notes:

Bush has hired Tim Miller, a star communications and research operative who is gay; longtime aide Sally Bradshaw, whose support for her pro-gay preacher recently showed up in a New York Times profile; and Mike Murphy, the veteran GOP consultant who joined other prominent Republicans in signing a 2013 brief calling on the Supreme Court to overturn California’s same-sex marriage ban, Proposition 8. What makes this band of operatives unique is not just that they support gay rights, but that many have made it their mission in the past to bring the party along with them.

With his team in place, Bush has attracted a wave of early support from many of the party’s most prominent gay rights advocates. Ken Mehlman, the former Republican National Committee chair who authored the Prop. 8 brief, has reportedly been introducing Bush to donors. At least a dozen of the brief’s 80 signatories have either endorsed him, donated to him, or gone to work for him. Tom Ridge, the former Homeland Security secretary who regularly preaches LGBT inclusion to his fellow Republicans, has declared himself an enthusiastic Bush-backer.

Miller, who worked for Sen. John McCain’s and Jon Huntsman’s presidential campaigns, and Murphy, who has been in and out of McCain’s orbit and relishes bashing “unwashed” working-class conservatives to liberal television hosts and elite Beltway denizens, are more than familiar with candidates who have run campaigns that showed nothing but disdain for conservatives who oppose illegal immigration and value traditional marriage and life.

According to the left-wing BuzzFeed, a “senior Republican fundraiser with close ties to several mega-donors said it is increasingly important for candidates to reject conservative dogmas on the marriage issue in order to get a hearing from big-dollar contributors.” And “many in the monied, moderate, corporate wing of the GOP are cheering the early hires as a sign that” Bush’s position on gay marriage may “evolve beyond his on-the-record statements.” Donors apparently have come to believe after recent fundraisers that Bush was “supportive at best” of gay marriage and “agnostic at worst.”

Like with his pro-amnesty views, there is “nothing but upside” for Bush to signal to donors that he may be evolving on gay marriage. As BuzzFeed points out, the “GOP donor class–heavily concentrated in secular metropolitan centers where the LGBT culture wars don’t rate–generally supports marriage equality, and finds pulpit-pounding activists embarrassing.”

And on the issue of amnesty for illegal immigrants, the GOP donor base and establishment finds the conservative base to be even more “embarrassing” than on the traditional marriage issue.

Those who helped Bush raise at least $4 million in Chicago last week included, according to the Wall Street Journal, John Rowe, the chairman of the Illinois Business Coalition that supports citizenship for illegal immigrants. He donated $25,000 to Bush’s PAC and reportedly said Bush “is the kind of candidate that a lot of Republican donors have been looking for—someone who can win the general election and reach out beyond the party’s core supporters.”

The Chicago fundraiser, according to the Journal, also included big backers of gay marriage, Common Core, and abortion.

Former New Jersey Governor Christie Todd Whitman, a prominent symbol of the establishment Republican who loathes conservatives, attended the fundraiser and reportedly said that she is leaning toward Bush “because he’s been very thoughtful in sticking to his guns on issues like immigration and Common Core.” John Canning, described as “a top fundraiser for former President George W. Bush who donated to Mr. Obama in 2007 because… the GOP had moved too far to the right on stem-cell research and climate change,” also attended the Chicago fundraiser, according to the Journal.

As conservative icon and talk radio host Mark Levin has emphasized, “moderate” GOP candidates who do not galvanize the conservative base in the general election end.

“It’s very, very, important that we nominate a conservative for the first time since Ronald Reagan,” Levin said last year. “There are people under 50-years-old who have never had an opportunity to vote for a conservative president. We want to show them what it’s like. It’s our generation’s responsibility.”

Republicans who want a presidential nominee who does not galvanize grassroots conservatives seem to think that Jeb Bush is their best investment.