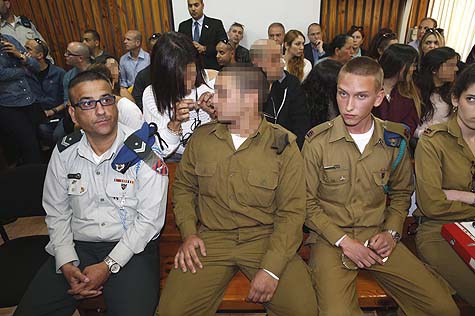 The Israeli soldier who shot a terrorist last Thursday in Hebron was in court Tuesday.

“What happened in Hevron does not represent the values of the IDF. The IDF expects its soldiers to act with self-control and in accordance with the open-fire regulations.”-Prime Minister Benjamin Netanyahu

“Gentlemen, what do you want here? An army that becomes bestial? An army that lost its moral backbone? I am proud that the company commander indicated that it was an anomalous incident.”-Defense Minister, Moshe Yaalon

“If one comes to slay you, slay him first.”-Babylonian Talmud, 58,a

The world is watching us. It watches Jewish weakness with a shrewd and evil eye, still accusing us of barbarism. And when a lone Jewish individual finally rises up and exhibits some Jewish justice, Amalekites, big and small, rise up and bellow for Jewish blood. Naturally, this is always expected. The vile haters see what they have always seen: Hook nosed Jews killers of their false man-god and murderers of Christians, or in the modern version of the libel, Zionist butchers slaughtering “Palestinian children.” To reiterate my point in previous articles, I would see these Jew haters all destroyed.

Once again, Israel’s leaders repeatedly adopt the standards and expectations of the Jew-hating world.

Case in point: A heroic Jewish soldier kills an Arab terrorist in Hebron on Purim and now the soldier sits in prison. Within the blink of an eye, in the absence of an investigation, his own Prime Minister condemned his behavior. A knee-jerk scream of “GUILTY! GUILTY! GUILTY!” from a chorus of politicians and Leftists. This is the state of our country today. Not only are we a country not run in accordance with Halacha, we are removed from even the most basic human principle: Self-preservation.

The real problem is an in-house plague: The quislings of B’tzelem who orchestrate against the Jewish people representative of the multitudes of weak-kneed Jews who cannot differentiate between evil and good. The Prime Minister of Israel whose first response is to castigate and damn an heroic Jewish soldier to the dungeon, for the crime of ridding the world of one more Arab terrorist, who moments earlier stabbed and wounded a Jewish soldier while attempting to murder him.

Purim comes and goes and all that remains are  hazy recollections. Most Jews squander its gift of opportunity to internalize critical Jewish concepts. Purim is pop-Jewish culture personified, at best an historical curiosity. Some who see Purim in this dimmed light are actually charged with protecting Israel from our enemies. In an era of Haman’s and Amalekite genocidal intent, we need more people like Mordechai and Esther. Sadly, we have Benjamin Netanyahu and his cadre of weak-willed men.

Purim isn’t Mardi Gras. Purim is the ultimate story of Jewish survival. Amalek tried to destroy us as they do every generation. Yet who speaks of Amalek today, except for the few Jews who understand Jewish principles? It’s a joyous time to remember the miracles of salvation from our ancient foe. Purim is the story of the Holocaust that never was. The first “Never forget.”

When a Mordechai finally does show his face in some capacity, our weak-kneed Prime Minister, Benjamin Netanyahu, and the equally feckless Moshe Yaalon have the gall to slander and besmirch him.  Some mainstream “right-wingers” are criticizing Bibi and his friends and calling for a fair trial before the soldier is punished. To debate whether the soldier thought the Arab had an explosive on his person or not is irrelevant, though logic and the evidence would suggest this position has merit.

As I live and breathe, I don’t give a damn if the Arab terrorist was completely neutralized and there was no danger of explosives or further danger. I say this with no compunction. I support the soldier because he put a bullet in this terrorist’s head. That’s what a normal society should do to terrorists. What’s the alternative? To imprison him, educate him, and then release him to murder again? This is normal? This is Sodom and Gomorrah personified.

Killing Arab terrorists isn’t rocket science. There should be no moral confusion, no ethical dilemmas. This is the Torah’s position: Remove evil from your midst. Eradicate every manifestation of corruption perverting Eretz Yisrael- person, institution, or idolatrous construct.

Some politicians hedged their bets. People like Naftali Bennett waited to read the nation’s pulse before making a definitive statement, which seems to theoretically support the soldier. Of course within his statements, he leaves the possibility that the army’s investigation could find him guilty. This is unacceptable to me. The army is run by spineless politicos who follow the X-ian tenet of “turning the cheek” rather than showing the full might of a Jewish army. I have no confidence that the army will reach a just conclusion with the Left  screaming for blood.

Those from B’Tzelem deserve to be hanged. What human virus takes a video of an Arab terrorist moments after he attacked a Jewish soldier with a knife? Clearly they were laying in wait,  trying to get their orchestrated “spontaneous” moment on tape. In the aftermath of a vile act of Amalekite violence, they saw fit to document the Arab’s treatment, praying to whatever false-god they serve, that the creature would get “mistreated.” These are the kinds of evil Jews the nations is dealing with: Leftist, self-hating Jews advocating for murderers.

Purim is like Chanukah. The festival for the strong moral Jew who hates the enemies of Am Yisrael, and doesn’t feel the need to explain, apologize, or scream out their commitment to self-restraint. Leave that to the hasbara activists, who will never understand that people like Netanyahu are preventing us from growing as a Jewish nation.

Basic Priority: Defend the Jewish people at home, before promising (always promising) to defend Israel from Iran. Bibi won’t even defend Jews who defend themselves. Or others. A soldier who kills a terrorist is a Jewish hero, a person to be celebrated and emulated.

The lesson of Amalek is that true evil exists in every generation. We are mandated to identify, demonize, and destroy them. Not coddle, appease, engage, “understand and contextualize them,” and concede land and life for the promises of a better behaved Amalek.Amalek needs to be shot in the head, not neutralized and legally processed in our corrupt courts. One who kills an Arab terrorist, be he soldier or civilian is a modern day gibbor. In this instance, this soldier saved untold numbers of lives, because this beast would have surely been released in some future exchange of Arab terrorists for the promises of Arafat and Abbas. For that alone, he is a Jewish warrior, and he needs our unrelenting support. Demand that Netanyahu and his cohorts immediately release this hero.

The Nation stands behind this soldier. That’s a good thing. The people know that it is still a civilian army, and this scares people whose sons and daughters risk their lives every day, under the jurisdiction of people who have no moral compass. The problem is that the nation is NOT behind less glamorous examples of injustice, Meir Ettinger and others falsely detained by the government.

The Lesson of Purim: Amalek represents the greatest degree of evil and Jew hatred. In every generation, internalize it and disseminate the message or expect more of the same: Bus bombings, stabbings, shootings, lynching, bloodbaths. And continued Jewish cowardice and appeasement from the top down, in the face of unrelenting Amalekite evil.

The Arab/Muslim world is Amalek. If not them, then who does the torah speak of “in every generation”? Jews need to comprehend this simple truism. Open your eyes.