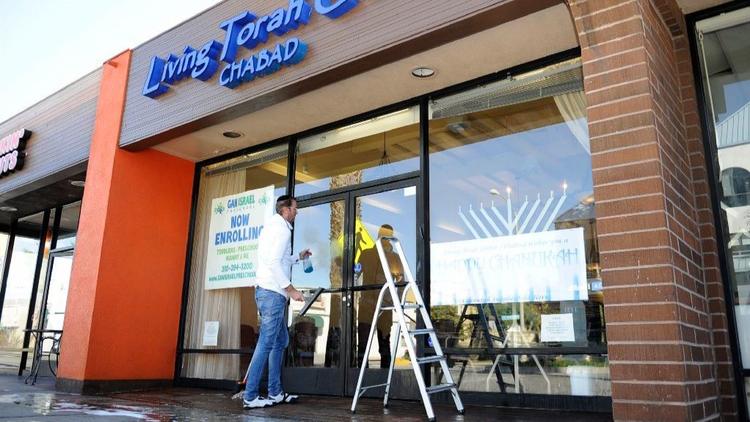 When Rabbi Boruch Rabinowitz arrived at his Santa Monica synagogue on the second day of Hanukkah, he made an unpleasant discovery.

The front window was smeared with feces and rice, in close proximity to a menorah display.

The vandalism, which occurred Saturday night or Sunday morning, did not include any anti-Semitic messages. But officials at the Living Torah Center Chabad on Wilshire Boulevard suspect the building was targeted for religious reasons.

“This seems kind of intentional,” Assistant Rabbi Dovid Tenenbaum said on Sunday morning. “With a religious artifact in the window, we have to assume so.”

The night before, the congregation had celebrated the start of Hanukkah with menorah lighting, latkes and doughnuts at Rabinowitz’s house.

Rabinowitz arrived at the synagogue a little before 8 a.m. on Sunday morning to prepare for a service and found the noxious substances on the window.

Santa Monica police officers came to the location and took a report, but there were no witnesses to the crime. Tenenbaum said the synagogue will soon install video cameras.

The congregation is accustomed to occasional anti-Semitism.

During a service about a month ago, Tenenbaum said, a man stood up and shouted “Heil, Hitler,” positioning his arms as if shooting a rifle. He ran away before anyone could catch him.

About a year ago, a letter left in the synagogue’s mailbox contained a swastika and a message: “Get out of here, you Jews.” Also last year, someone scrawled graffiti on a Sukkot hut at the synagogue.

The outline of a cross is still visible on the synagogue’s front window, etched by a vandal years ago.

Tenenbaum said he is not deterred by small acts of vandalism, considering the persecution suffered by Jews through the centuries.

“There are many times that others have wanted to annihilate the Jewish people,” Tenenbaum said. “The Jewish people have succeeded, and we’re still here to talk about it, thank G-d.”