St. Louis Back in Flames: Black Crime Wave Out of Control 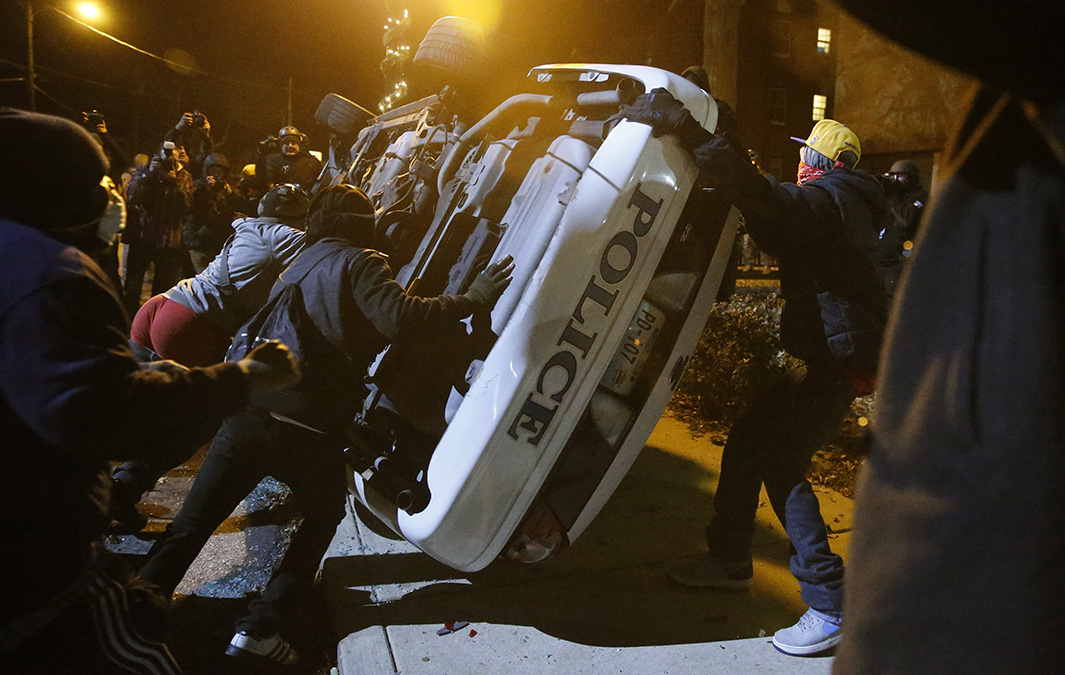 A disturbing yet familiar scenario is playing out once again in St. Louis, where police made nine arrests and dispersed demonstrators protesting the shooting of black American Mansur Ball-Bey, 18, on Wednesday. According to police, Bell-Bey aimed a weapon at two white officers who returned fire, killing him. Unsurprisingly, the protesters are disputing police accounts of the incident.

The Fountain Park neighborhood where the shooting occurred is an area of abandoned, boarded up houses “plagued by violence,” noted St. Louis Police Chief Sam Dotson. In recent days, a business near the shooting site was hit with gunfire, and a 93-year-old Tuskagee Airman was robbed and carjacked last Sunday when he got lost trying to find his daughter’s home and stopped to call her. A man got in the airman’s car robbing him and fleeing in another vehicle. The airman tried to track him, but pulled over once again to ask two men for help. The duo carjacked him.

In addition, there have been four homicides within a half-mile of Fountain Park neighborhood where this incident took place.

The two officers were executing a search warrant around noon Wednesday at a home near the Walton and Page street intersection. As they approached, two armed men ran out the back door. The officers ordered them to stop, but Ball-Bey allegedly pointed his weapon at the policemen. Both officers fired a total four shots, one by one officer and three by the other. Despite being hit, Ball-Bey continued running until he collapsed. He was pronounced dead at the scene and police recovered a gun that had been a reported stolen from Rolla, MO. The other suspect remains armed and at large, and police described him as a man in his mid- to late teens. “Officers in the rear alley ordered them to stop and to drop the gun,” Dotson told reporters. “As they ran, Ball-Bey turned and pointed the gun at the officers. There were two officers in the alley. Both officers fired.”

Another man and a woman were removed from the house without incident and Dotson revealed the house had been served with previous search warrants, including one about 18 months ago that yielded several illegal guns. Three additional weapons and crack cocaine were also recovered at or near the residence. One gun was found in the house itself and two others over the fence where they were tossed when the two suspects fled the house. Two of the three remaining guns were also stolen weapons. “Detectives were looking for guns, looking for violent felons, looking for people that have been committing crimes in the neighborhood,” Dotson added.

Following the shooting, an angry crowd of approximately 150 gathered at the intersection, blocking it. Police initially cleared it, makings some arrests in the process. Yet when the officers left the crowd marched onto Interstate 70, and blocked that roadway before returning to the Walton and Page intersection. “We got called back to the neighborhood when a car was set on fire,” Dotson said.

Upon their return officers officers were assaulted with bricks and bottles. “At at that point, after the crowd ignored repeated requests and directions, inert smoke was used. After that didn’t have an effect, tear gas was used. There’s a line that gets crossed from peacefully protesting, which we will support, to when laws are broken,” Dotson said. “Police officers have to do their job.”

The two officers involved are 33 and 29 years of age, each with about seven years of employment on the force. They have been placed on administrative leave.

Some of the protesters who had already been on hand to mark the anniversary of the fatal shooting by police of 25-year-old Kajieme Powell last August after he came at them with a knife, refused to accept police accounts of the shooting. “Another youth down by the hands of police,” said Dex Dockett, 42, who lives nearby. “What could have been done different to de-escalate rather than escalate? They come in with an us-against-them mentality. You’ve got to have the right kind of cops to engage in these types of neighborhoods.”

Resident Fred Price insisted police “provoked the situation,” further stating incidents like this “make us want to keep the police out of the neighborhood. They’re shooting first, then asking questions.” Robert Phillips didn’t buy the idea that Ball-Bey had pointed his gun at the officers. “They always say that,” Phillips delcared.

Several crowd members also chanted “Black Lives Matter,” the slogan that has been an integral part of anti-police protests since the death of 18-year-old Michael Brown in nearby Ferguson last year.

Those protests have been fueled in large part by the racist #BlackLivesMatter movement and other left-wing activists determined to drive a wedge between police and the residents of high-crime neighborhoods where such potentially deadly encounters are likely to take place. And while such activism may engender a level of satisfaction among those who view virtually every encounter between police and minorities as one of racial victimization, that satisfaction comes with a terrible price tag attached to it: St. Louis’s homicide rate is on target to reach its highest level in two decades, already exceeding 100 murders by the end of July.

It is an ominous trend also playing itself out in other cities, including Baltimore, New Orleans and Houston where murders are up 30 percent or more. There are also increased homicide totals in Chicago, Dallas, Minneapolis and Washington, D.C. And despite the lip service given to the notion that black lives matter, the increased violence is disproportionately affecting poor and predominantly African-American and Latino neighborhoods that are bearing the brunt of the carnage.

As bad as they are, those arrest stats may nonetheless be understating the problem. Earlier last month when the murder total had reached 93 homicides (compared with 58 at the same point last year) police had made only 29 arrests. Dotson admitted the city’s “clearance rates aren’t where I’d like them to be,” a reality Mayor Francis Slay attributes to a no-snitch mentality. “These are disputes, and there are victims who won’t talk to the police,” he said following a spate of violence in June. “Trying to make an arrest isn’t that simple. In one case, they’ve got (multiple) people shot and not one of them would identify the shooter.”

No one should be the least bit surprised. Ever since the death of Michael Brown and the rise of the contemptible “hands up don’t shoot” narrative that has driven the agenda of an American left—along with the equally false narrative that this is an endemically racist nation — the effort to drive a wedge between police forces and the citizens they serve has been relentless. The shameless painting of police as an “occupying force” in minority neighborhoods stands in stark contrast to the calculated silence that accompanies the reality many of those neighborhoods are de facto war zones: it was the left-wing Huffington Post in 2012 that pointed out more people had been killed in Chicago than Afghanistan between 2001 and 2012. Doubtless it is equality indelicate to point out that America’s most dangerous cities are Democratic strongholds—and that St. Louis tops the list.

During the protests at Fountain Park, Joe Robinson who works with Better Family Life community outreach, was one of about a dozen people holding signs illuminating an undeniable message, one that ought to form the foundation of a genuine black lives matter movement: “We must stop killing each other.” “The sign says it all,” Robinson explained. Maybe not all, but it’s a great place to start.