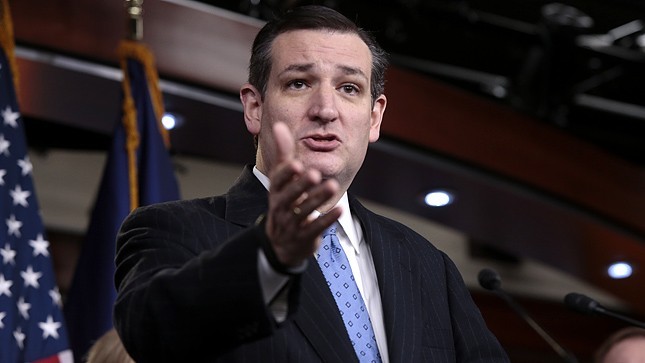 Ted Cruz is holding five rallies across Illinois on Monday in the lead-up to its Super Tuesday vote tomorrow. The Cruz rallies highlight the superior ground effort of his campaign.

Donald Trump currently has around 36 percent support in Illinois. Cruz is around 25 percent and Ohio Gov. John Kasich is at 19 percent. While Trump may win the overall vote in Illinois, it is possible he ends up with fewer delegates than Cruz, or even Kasich.

In each district, voters vote for a candidate and then must vote for up to three individuals to serve as delegates, each of whom are affiliated with one of the candidates.

The vote for the candidate counts towards the statewide total, but the votes for individuals running as delegates are used to tabulate the delegates for that district.

It is entirely possible, for example, that Donald Trump wins the votes within a Congressional District, but three individuals tied to the Kasich campaign win the most votes for delegates. In that situation, Kasich would win the three delegates for that district.

While Cruz has been gaining in overall polls in Illinois, his five rallies, which touch areas represented by at least 10 Congressional Districts, are designed to maximize votes for Cruz delegates.

One Illinois political source told Breitbart News that, in early voting, there has been a significant drop-off in people voting for a candidate, but not voting for individual delegates. In other words, people are voting for their chosen candidate for the nomination, but not completely the ballot by voting for delegates.

Its also important to note that Ohio Gov. John Kasich has many members of Illinois Republican Gov. Bruce Rauner’s political team assisting his campaign. While this may not help Kasich win the state overall, it should help him rack up delegates in individual Congressional Districts.

It is not unlikely that Trump could win Illinois, with its 15 delegates, but Cruz and Kasich split the remaining 54 delegates beween them. Cruz’s campaign activity, however, suggests he is well-positioned to win the lion’s share of delegates at stake on Tuesday.

Cruz, in other words, could lose the state, but win the majority of the state’s delegates. The race for the nomination, after all, is about winning delegates, not states.

The one weakness for the Trump campaign throughout the primary contest is that he doesn’t yet have the campaign organization or ground game to match his rallies or earned media exposure.

In most states, that weakness has been papered over by the delegate selection process. Illinois, however, has a system that can expose those weaknesses. A candidate needs a lot more than rallies to win Illinois and its rich bounty of 69 delegates.