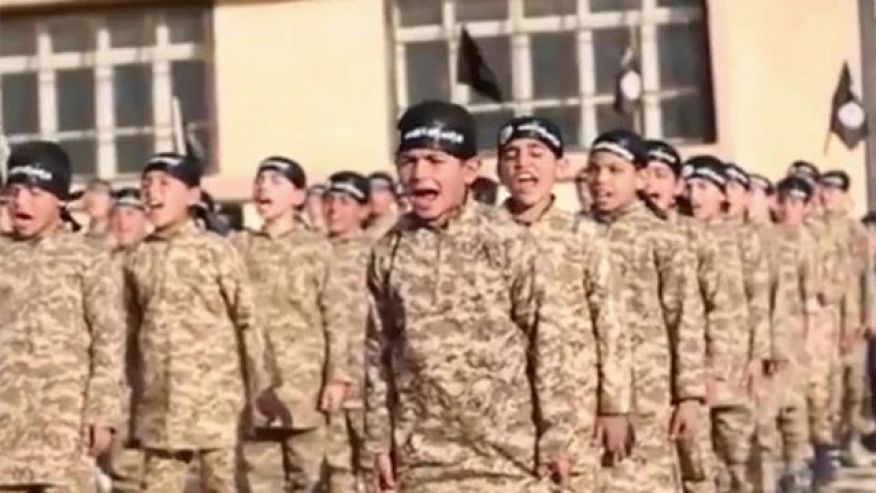 The latest disturbing video from ISIS shows what the [Islamic terrorist] group touts as the next generation of jihadist killers, pint-sized terror trainees who appear to be as young as 5 participating in drills and reciting verses from the Koran.

The 9-minute video released Monday shows about 70 camouflage-clad kids, who are reportedly the children of foreign fighters who have flocked to Iraq and Syria to join the Islamist army. An instructor states in Arabic that most of the children are in the second phase of training and that they represent the “next generation” of ISIS. The video illustrates the charge in a UN Human Rights Council report last year that determined that Islamic State “has established training camps to recruit children into armed roles under the guise of education.”

“At the camps, the children recruited received weapons training and religious education,” the report stated. “The existence of such camps seems to indicate that ISIS systematically provides weapons training for children.

“Subsequently, they were deployed in active combat during military operations, including suicide-bombing missions,” it stated.

In the video, the children wear ISIS’ trademark black headbands and are seen answering religious questions and quoting the Koran against a soundtrack of Arabic music. The clip provides a disturbing snapshot into how the [Muslim jihad terror] group is taking young innocent children and turning them into their own depraved version of Nazi Germany’s Hitler youth, experts said.

“The existence of such camps seems to indicate that ISIS systematically provides weapons training for children.”- UN report on ISIS

The tape, which was posted on the Internet, was apparently shot at a military training center the Islamic State calls the Al Farouk Institute for Cubs in Raqqa, Syria. The video cannot be independently verified. Ser scenes show the youngsters kneeling in prayer with a trainer kneeling in prayer in front of them in front of a pair of rifles. There is little laughter, even as the boys in the video are shown eating a post-prayer meal.

“If you believe the ISIS caliphate is the best place to be and Allah commands you to go there, you’d want your family there, too,” sad Ryan Mauro, a national security analyst for the Clarion Project, a New York based research institute that tracks global terrorism. “For ISIS supporters, this is like signing your kid up for the best private school.” 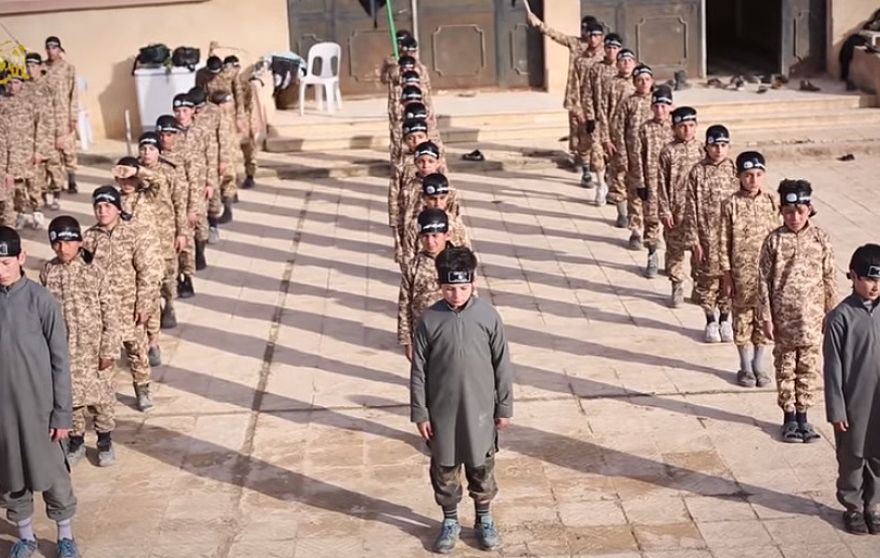 The video is designed to send a message that ISIS is here to stay, Mauro added.

“ISIS is emphasizing its child recruits because it obviously makes for good footage but also to emphasize this is a generational struggle,” Mauro said. “You can kill off the current leaders and fighters, but their kids will fight on. It makes it harder to celebrate ISIS’ losses if you know their manpower will be replenished with brainwashed children.”

“I think this is shocking for everyone who sees such images,” he said. “Islamic State from the beginning has been saying that they’re planning not just to build a state but a new generation of jihadists who have been raised on their diet of blood and violence.”

ISIS has long been known to employ child soldiers, deploying them as human shields, suicide bombers — and even executioners. In one horrifying video the terror group released in January, a young boy is shown executing a pair of captives the terror group claims were Russian spies. The video shows a young boy of 10 or less shooting the two men repeatedly in the head with a pistol.

Syrians in Raqqa have previously reported that the terrorist army has forced children into its ranks and indoctrinated them in its bloodthirsty ways. One man told the website Syria Deeply.org that his 13-year-old son was forced to attend a training camp where he underwent a form of “brainwashing the children.” When the boy returned, his mother found a blond, blue-eyed doll – along with a large knife given to her son by his ISIS supervisors, in his bag. The boy told his parents the materials were given to children to practice beheading Westerners, according to the report.