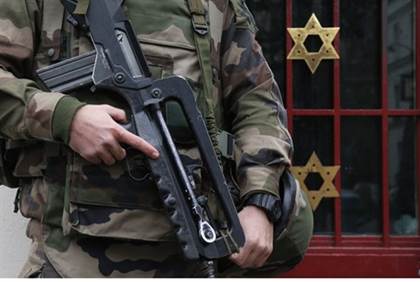 A French anti-Semitism watchdog group reports that a Jewish family was attacked and robbed in their suburban home Wednesday.

According to the National Bureau for Vigilance Against Anti-Semitism (BNVCA) report, three masked men, described as of African descent [Muslim], broke into a home in Le Blanc-Mesnil, a few kilometers outside of Paris. They then held the parents and son captive while they searched the home.

The criminals allegedly told the family that they chose to break into the apartment “because they are Jewish and Jews have money.”

The men took about 2,500 Euro ($2,700 US), a key to the family’s Mercedes, and keys to the family’s jewelry shop in Paris. They also injured the three victims, the son most severely. All three are now in the hospital.

The BNVCA statement noted that “This attack resembles the recent assault in Créteil. The stereotype of ‘Jews and money’ remains in the public mentality. The BNVCA fears that the scourge of anti-Semitism is growing rapidly.”

“While the state has taken steps to protect buildings, synagogues, community centers, Jewish schools and–now with the ‘Vigipirate’ plan–posts soldiers in front of all these establishments, we find that the targets of anti-Jewish attacks are more often Jewish children wearing kipot in the street, Jewish businesspeople, their customers, and now Jewish families in their own homes.”