Trump: “As president, I can’t take Israel’s side” 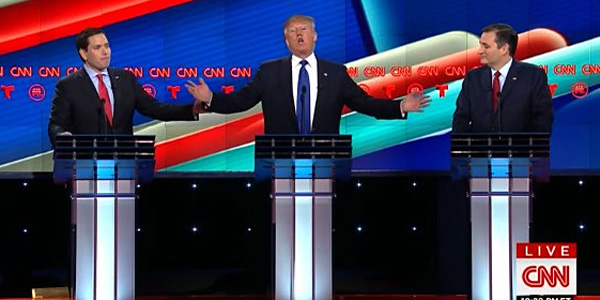 During a wildly animated GOP debate Thursday evening, GOP front-runner Donald Trump asserted that, as president, he cannot side with Israel in the Israeli-Palestinian conflict because doing so would “demean” Palestinians.

Trump’s comments brought an onslaught of criticism from Republican presidential candidates Ted Cruz and Marco Rubio, both of whom vowed to stand by Israel.

‘Terrorists’ and U.S. support for Israel

During the debate, Blitzer began a round of questions on foreign policy by addressing the conflict between the Palestinians and Israelis. He quoted Trump as having previously said, “Let me be sort of a neutral guy. I don’t want to say whose fault it is. I don’t think it helps.”

Blitzer then asked Trump, “How do you remain neutral when the U.S. considers Israel to be America’s closest ally in the Middle East?”

Trump added, “I was the Grand Marshal down Fifth Avenue a number of years ago for the Israeli Day parade. I have very close ties to Israel. I’ve received the Tree of Life Award and many of the greatest awards given by Israel. As president, however, there’s nothing that I would rather do [than] bring peace to Israel and its neighbors.”

He then insisted, “I think it serves no purpose to say you have a good guy and a bad guy.”

“Now, I may not be successful in doing it. It’s probably the toughest negotiation of anywhere in the world, of any kind, OK? But, it doesn’t help if I start saying I’m very pro-Israel, very pro-Israel, more than anybody on this stage. But it doesn’t do any good to start demeaning the neighbors. Because I would love to do something with regard to negotiating peace, finally, for Israel and for their neighbors.”

Trump said he can’t do that as a negotiator while taking sides.

Watch the whole heated exchange on Israel with Trump, Rubio and Cruz:

Cruz then responded, “This is another area on which Donald agrees with Hillary Clinton. And on which I disagree with them both strongly. Both Donald and Hillary Clinton want to be ‘neutral,’ to use Donald’s word, between Israel and the Palestinians.

“Let me be clear, if I’m president, America will stand unapologetically with the nation of Israel. The notion of neutrality is based upon the left buying into this moral relativism that is often pitched in the media. Listen, it is not equivalent. When you have terrorists strapping dynamite around their chests, exploding and murdering innocent women and children, they are not equivalent to the IDF officers protecting Israel. And I will not pretend that they are.

“Just today Iran announced they’re going to pay $7,000 to each suicide bomber. I would note: Missing from Donald’s answer was anything he has done, in his nearly 70 years of living, defending Israel.”

Cruz concluded, “I have, over and over again, led the fight to defend Israel, to fight for Israel, and if you want to know who will stand with Israel, let’s start with who has stood with Israel when the heat was on.”

Blitzer asked Rubio what’s wrong with the U.S. being an “honest broker” in negotiations, as Trump has proposed.

“Because, I don’t know if Donald realizes this, I’m sure it’s not his intent, perhaps, but the position you’ve taken is an anti-Israel position, and here’s why,” Rubio said.

“You cannot be an honest broker in a dispute between two sides in which one of the sides is constantly acting in bad faith. The Palestinian Authority has walked away from multiple efforts to make peace, very generous offers from the Israelis.

“Instead, here’s what the Palestinians do: They teach their four-year-old children that killing Jews is a glorious thing. Here’s what Hamas does: They launch rockets and terrorist attacks against Israel on an ongoing basis.

“The bottom line is, a deal between Israel and the Palestinians, given the current makeup of the Palestinians, is not possible. And, so the next president of the United States needs to be someone like me, who will stand firmly on the side of Israel.

“I’m not going to sit here and say I’m not on either side. I will be on Israel’s side every single day because they are the only pro-American, free-enterprise democracy in the entire Middle East.”

Asked to respond, Trump said, “I’m a negotiator,” adding, “And in all fairness, Marco is not a negotiator.”

Rubio charged, “He thinks (negotiating with) the Palestinians is a real-estate deal.”

“These people may even be tougher than Chris Christie,” taunted Trump.

Rubio repeated his argument that dealing with the Palestinians would not be like making a real-estate deal, to which Trump replied, “A deal is a deal.”

“You are not a negotiator, and with your thinking, you will never bring peace,” replied Trump.

Rubio reiterated, “Donald may be able to bring condos to the Palestinian areas, but … this is not a real-estate deal.”

Trump’s wall at the U.S.-Mexico border

“I’m not going to pay for that f—ing wall! He should pay for it. He’s got the money,” Fox, visibly upset, told Fusion’s Jorge Ramos.

Trump estimates it will cost roughly $8 billion to build a wall along the southern border and has repeatedly said he’ll force Mexico to pay for its completion.

At Thursday’s debate, Trump was asked, “If you don’t get an actual check from the Mexican government for $8, $10 or $12 billion … how are you going to make them pay for the wall?”

“We have a trade deficit with Mexico of $58 billion a year, and that doesn’t include all the drugs that are pouring across and destroying our country. We’re going to make the pay for that wall. Now, the wall is $10 to 12 billion if I do it. If these guys do it, it’ll end up costing $200 billion.

“Mexico will pay for it because they are not doing us any favors. They could stop all of this illegal trade if they wanted to, immediately. Mexico will pay for the wall. It’s a small portion of the kind of money we lose and the deficits that we have with Mexico. ”

Cruz said America is one just one justice away from serious destruction of the Second Amendment, life, marriage and liberty. He promised any justice he nominates will vigorously defend religious liberty.

Hewitt asked Trump, “Will you commit to voters tonight that religious liberty will be an absolute litmus test for anyone you appoint, not just to the Supreme Court, but to all courts?”

Asked, “Are you worried a President Trump would not repeal Obamacare?” Rubio accused Trump of saying he favors Obamacare’s individual mandate.

For his part, Carson said, “Health care is not a right, but I do believe it is a responsibility for a responsible society.” He proposed “health empowerment accounts” that Americans keep from birth to death and pass on to their relatives.

“It makes every family their own insurance carrier,” Carson said. “Your catastrophic health care is going to cost a lot less money now.” He said his plan “would be such a good program that nobody would want Obamacare.”

CNN almost skipped Cruz without allowing him the opportunity to address Obamacare.

“As president, I will repeal every word of Obamacare,” Cruz promised.

“I do not want socialized medicine,” Trump said, agreeing that Obamacare “is going to be a disaster for the American economy.” He noted that Americans’ premiums are soaring: “We have to get rid of Obamacare. It is going to destroy our economy completely.”

“I will not allow people to die on the sidewalks and the streets of our country if I’m president,” he told Cruz. “We’re going to take those people and they’re going to be serviced by doctors and hospitals. … Call it what you want, people are not going to be dying in the streets.”

As WND reported Wednesday, former Republican presidential candidate Mitt Romney claimed, without proof, that a “bombshell” may be lurking in Trump’s taxes.

“I think we have good reason to believe that there’s a bombshell in Donald Trump’s taxes,” Romney told Fox News’ Neil Cavuto. “Either he is not anywhere near as wealthy as he says he is, or he hasn’t been paying the kind of taxes we would expect him to pay, or perhaps he hasn’t been giving money to the vets or the disabled like he has been telling us he’s been doing. The reason I think there is a bombshell in there is because every time he is asked about his taxes, he dodges and delays and says, ‘Well, we’re working on it.’ Hey we’re not talking about the taxes that are coming due this year. We are talking about taxes already filed, back taxes.”

Asked about the tax issue Thursday, “I was the first one to file a financial disclosure of almost 100 pages. You don’t learn anything about someone’s wealth with taxes,” he said.

Trump said he is audited every year for 12 years, and is facing a “routine audit” now.

“I will absolutely give my returns. But I am being audited now for two or three years,” noting that he can’t release his taxes until the audit is concluded.

Hewitt turned to Rubio and asked him, “When are we going to see your returns?”

Rubio promised he would release them Friday or Saturday.

“Donald says he’s being audited,” Cruz said. “Well I think that would underscore the need to see those returns. If he has said something that was false and that an audit would find is fraudulent, then the voters need to know.”

Cruz charged that the mainstream media are not attacking Trump now like they will later.

He continued, “The next Republican nominee needs to be able to make that case against Hillary. And if Donald tried to do it, Hillary would turn to Donald and say, ‘But gosh, Donald, you gave $100,000 to the Clinton Foundation. I even went to your wedding. He can’t prosecute the case against Hillary, and we can’t risk another four years of these failed Obama policies by nominating someone who loses to Hillary Clinton in November.”

The 12 Super Tuesday states offer 595 Republican delegates. Currently, Trump has 82 delegates. Cruz and Rubio have 17 and 16 respectively. Kasich and Carson have 6 and 4.