And Sen. Coburn is TICKED.

This tweet probably alarmed a lot of people. Dan Scavino, of the Trump campaign, claimed that Tom Coburn trashed Ted Cruz as “without a doubt, one of the most dishonest people in DC.” That would indeed be a scandalous and damaging thing if it had happened. But it didn’t happen. It’s a lie.

First, take a look the firestorm:

So it is presented as a quote, and retweeted by The Donald himself. No clean hands here.

Luckily, Jake Tapper was on duty:

@DanScavino i see no quote from Coburn saying that

And of course, that’s because there is no quote from Tom Coburn saying that. Instead, some liberal blogger spewed that nonsense. This is from the story that Scavino and Trump linked: 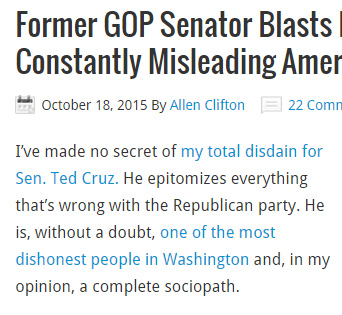 The ForwardProgressives writer said that about Cruz. The Trump camp took that line from the article, and in a tweet, faked it as a “quote” from Senator Tom Coburn.

And here is what’s more: Tom Coburn is ticked off about it! The Washington Examiner has this hot off the press:

“It’s an absolute fabrication. I’ve never said that, period,” Coburn told the Examiner. “It’s unfortunate he would use my name to say something dishonest. It’s a total fabrication.”

As Jake Tapper notes, how interesting that the question at hand is about honesty. Trump loves to call people liars, and then he lies about calling them liars. Just like he lies about his charitable giving, his eff-bombs, and who knows what else?

Maybe we should make up our own quotes. “Donald Trump’s campaign is the most dishonest smear job campaign in the history of American politics,” says that screaming goat from YouTube! Hey you don’t know. You don’t speak Spanish OR Goat, right?

By the way, one good thing that came out of this? Sen. Coburn just narrowed his choices. “I can tell you now somebody I’m not going to vote for,” he told the Examiner. Would that the sentiment would spread.

UPDATE: Both Trump and Scavino have deleted their tweets. No new tweets with an apology or even a retraction were made.