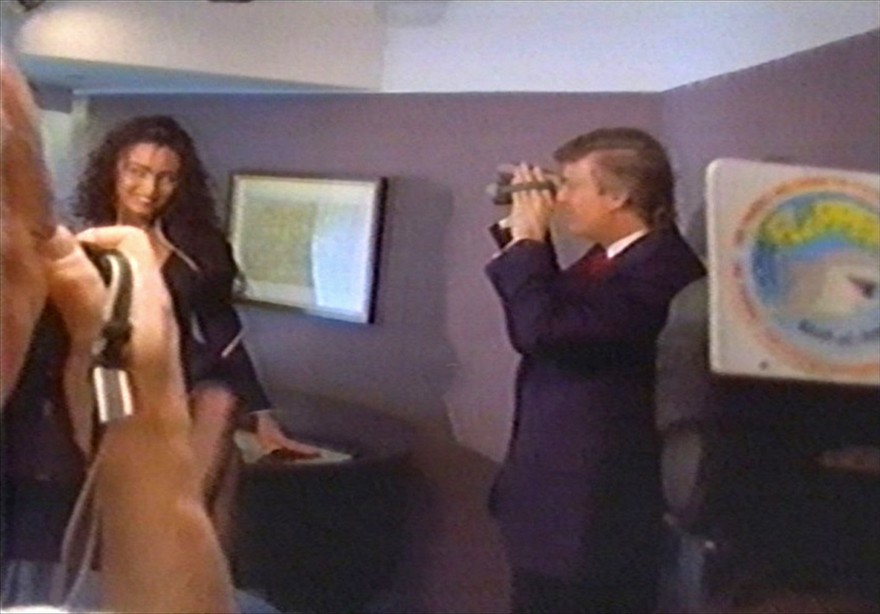 So how many reports are necessary before we’re allowed to believe that it’s not plausible to think everyone else in the world is a liar and only Trump tells the truth?

Let’s set aside the “Sh*thole” maelstrom for a bit, and go back to an old standard: Trump as creepy adulterer.

The Wall Street Journal is reporting that whatever arrangement is going on between the president and Melania Trump, it sure isn’t devoted, marital love.

The WSJ story notes that Trump’s personal lawyer paid $130,000 in hush money to the woman, in order to keep her from joining the parade of women coming out with stories of encounters with then-candidate Trump.

Michael Cohen, who spent nearly a decade as a top attorney at the Trump Organization, arranged payment to the woman, Stephanie Clifford, in October 2016 after her lawyer negotiated the nondisclosure agreement with Mr. Cohen, these people said.

Ms. Clifford, whose stage name is Stormy Daniels, has privately alleged the encounter with Mr. Trump took place after they met at a July 2006 celebrity golf tournament in Lake Tahoe, these people said. Mr. Trump married Melania Trump in 2005.

In October 2016, the 2005 “Access Hollywood” recording was released, with Trump describing how his wealth and celebrity allowed him to grab women “by the p***y.”

The release of that recording prompted over a dozen women to come forward with their own accounts of Trump behaving badly.

The majority of those stories dealt with nonconsensual encounters, while the encounter with Trump and Clifford was consensual.

“These are old, recycled reports, which were published and strongly denied prior to the election,” a White House official said, responding to the allegation of a sexual encounter involving Mr. Trump and Ms. Clifford. The official declined to respond to questions about an agreement with Ms. Clifford. It isn’t known whether Mr. Trump was aware of any agreement or payment involving her.

In a statement, Mr. Cohen didn’t address the $130,000 payment but said of the alleged sexual encounter that “President Trump once again vehemently denies any such occurrence as has Ms. Daniels.”

Mr. Cohen added in the statement, addressed to The Wall Street Journal: “This is now the second time that you are raising outlandish allegations against my client. You have attempted to perpetuate this false narrative for over a year; a narrative that has been consistently denied by all parties since at least 2011.”

But you allegedly wrote the check in 2016, dude, and it was a nondisclosure agreement, so of course, she couldn’t say anything about it.

Mr. Cohen also sent a two-paragraph statement by email addressed “TO WHOM IT MAY CONCERN” and signed by “Stormy Daniels” denying that she had a “sexual and/or romantic affair” with Mr. Trump.

“Rumors that I have received hush money from Donald Trump are completely false,” the statement said.

I’m picturing Cohen shoving a statement into Clifford’s face and telling her to sign.

Interesting that she signed her stage name and not her legal name.

The Journal previously reported that Ms. Clifford, 38 years old, had been in talks with ABC’s “Good Morning America” in the fall of 2016 about an appearance to discuss Mr. Trump, according to people familiar with the matter. In that article, the Journal reported the company that owns the National Enquirer agreed to pay $150,000 to a former Playboy centerfold model three months before the election for her story of an affair a decade earlier with the Republican presidential nominee, which the tabloid newspaper didn’t publish. The company said she was paid to write fitness columns and appear on magazine covers.

Clifford and her people were apparently about to cancel the deal, because the promised money wasn’t coming fast enough.

She apparently thought about all of those creditors that were stiffed by Trump and left empty handed and broken.

She received her payment through her then-attorney, Keith Davidson, who placed the funds in a client-trust account.

Ms. Clifford has appeared in about 150 adult films, and was considered among the industry’s biggest stars when the then-27-year-old met Mr. Trump at the American Century Championship in 2006, held at Edgewood Tahoe golf course in Nevada.

And everybody is denying this now, but it really is just too much.

Our president is a thoroughly repulsive man.