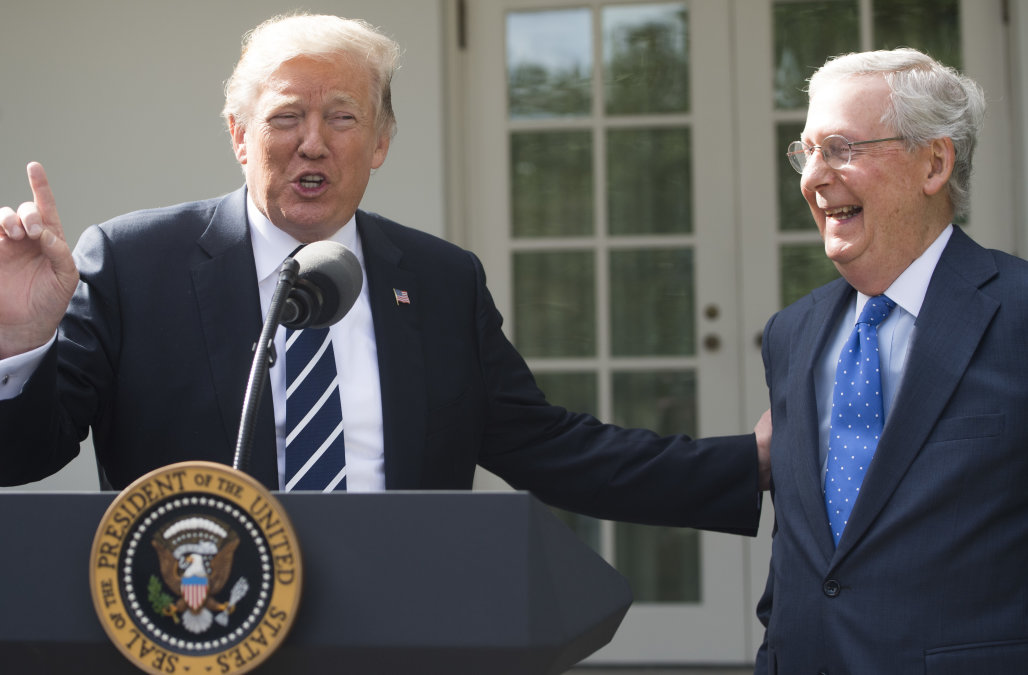 “Remember, the Republicans are 5-0 in Congressional races this year. In Senate, I said Roy M would lose in Alabama and supported Big Luther Strange – and Roy lost. Virginia candidate was not a ‘Trumper,’ and he lost,” the president’s tweet: 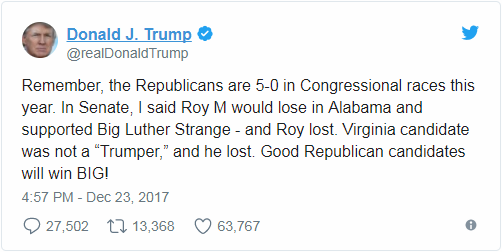 On Friday, the president signed into law the greatest legislative accomplishment of his administration, and the most significant tax reform in the past three decades, the Tax Cuts and Jobs Act of 2017.

It was a narrow legislative victory in both houses. In the Senate, the margin was 51 to 48, entirely along partisan lines. On this vote, Senate Majority Leader Mitch McConnell (R-KY) delivered for the president.

But in the case of the Alabama Senate election, McConnell was working against the president and the Trump agenda. So, when the Senate convenes in January, the narrow 52 to 48 Republican advantage will be an even narrower 51 to 49 margin, and the 49th vote that Senate Majority Leader Chuck Schumer (D-NY) will now be able to rely upon will be the far left Democrat McConnell helped elect over conservative Republican and Trump agenda supporting Roy Moore, the now Senator-elect Doug Jones (D-AL).

Let’s break down how this happened, and what it portends for the political future in 2018.

What President Trump fails to note is that Mitch McConnell’s establishment ally Strange lost the Alabama Republican primary to Moore after the president endorsed him. To his credit, President Trump announced his support for Moore in the general election immediately after his primary victory in September, and did not abandon that support, despite the debunked allegations of sexual harassment incidents from more than 30 years ago that first surfaced in the Washington Post on November 9.

McConnell, in contrast, used these allegations as an excuse to abandon the legitimately elected nominee of the Republican Party for the December 12 special election. And his establishment allies, including Alabama’s most prominent former Democrat, Sen. Richard Shelby (R-AL), helped elect a radical Democrat to a seat in a state President Trump won by 28 points in 2016, by publicly encouraging Republicans not to vote for Moore, the party’s nominee.

Shelby’s betrayal was particularly damaging, coming as it did before a wide audience on CNN’s State of the Union just two days before Alabama voters went to the polls.

His announcement that “I couldn’t vote for Roy Moore” gave Alabama Republicans permission to do the impermissible–vote for a radical Democrat over a conservative Republican.

And despite the huge array of financial resources lined up against him–-though all the reports have yet to been filed with the Federal Election Commission, a preliminary review of available FEC reports suggests that Jones and his allies spent well over an estimated $10 million in the two and a half months between the September 25 primary and the December 12 general election, while Moore and his allies spent about $3 million over the same time period–Moore ended up losing to Jones by less than 21,000 votes, or one and a half percent of all votes cast, 49.9 percent to 48.4 percent. (Note: When all reports covering the period November 22, 2017 to December 12, 2017 are filed with the FEC, the numbers reported for each candidate may change significantly.)

“Republicans are 5-0 in Congressional races this year,” the president says. (emphasis added)

The president forgot to add this key qualifier to that true statement, however–in cases they contested.

The Republican candidate in that race–a reliably Trump supporting establishment friendly Karen Handel–received a great deal of support–around $20 million— directly in her campaign, and indirectly through aligned SuperPACS. It was not nearly as much as Ossoff had, but in the end it was sufficient.

Had Roy Moore received a comparable level of support from the Republican establishment in the Alabama Senate special election, he would have won, and by a decent margin.

“Virginia candidate was not a ‘Trumper,’ and he lost,” the president says (emphasis added)

Finally, the president turns to political prognostication for 2018.

What has to happen for that prediction to ring true, and for the Republican Party to maintain control of the House of Representatives and expand its 51-49 margin in the Senate?

Good Republican candidates who support the Trump agenda must be fielded, as a starting point.

But more significantly, they must be provided–every one of them who wins the Republican nomination for his or her race–with sufficient financial and people resources to win.

The immediate consequence of the Doug Jones victory in Alabama–enabled as it was by McConnell and his establishment allies–is to energize the far left base of activists to get out the vote, and to encourage wealthy liberal Democrats who live in their coastal elite enclaves to keep sending buckets and buckets of cash to turn elections in traditionally Republican areas their way.

If the Democrats take control of the House of Representatives, everyone in the world knows that their first agenda item will be to impeach President Trump.

If that comes to pass, perhaps President Trump will send out a tweet thanking Senator McConnell for making it all possible as the Democrat leadership transmits the documents of impeachment requiring the U.S. Senate to conduct a trial to decide whether the president will be convicted and removed from office, or found not guilty and allowed to finish out his term.