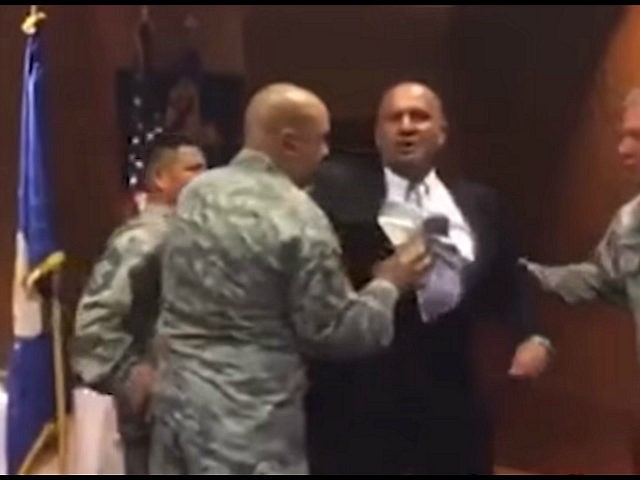 When a veteran started offering traditional remarks at a military flag-folding ceremony, several uniformed airmen assaulted him, dragging him out of the room because his remarks mentioned God. Now First Liberty Institute lawyers representing retired Senior Master Sergeant Oscar Rodriguez are demanding that the U.S. Air Force apologize and punish those responsible or face a federal civil-rights lawsuit.

For countless years, service members have given the “flag-folding speech” at military and civic events, including retirement ceremonies. Traditionally, this speech explains the colors, symbols, and history of the flag.

The flag-folding speech also contains several religious references, including, “Let us pray that God will reflect with admiration the willingness of one nation in her attempts to rid the world of tyranny, oppression, and misery. It is this one nation under God that we call, with honor, the United States of America.”

In 2005, the Pentagon changed the speech to remove all references to the divine, substituting additional historical facts such as Neil Armstrong’s planting of an American flag on the moon in 1969. But many service members prefer the traditional speech and desire that version given at their own retirement celebrations.

Rodriguez retired from the Air Force in 2013 after 33 years of service to his nation. He has a clear and distinctive voice and is frequently asked to deliver the flag-folding speech at retirement ceremonies.

On April 3, 2016, Master Sergeant Charles Roberson was retiring from active duty. Roberson had heard Rodriguez give his stirring rendition of the traditional flag-folding speech and asked Rodriguez if he would give that speech at Roberson’s retirement celebration at Travis Air Force Base where Roberson served in the 749th Aircraft Maintenance Squadron.

According to a demand letter sent by First Liberty Institute on Sunday, when the squadron’s commanding officer, Lieutenant Colonel Michael Sovitsky, learned that Rodriguez would give the traditional speech mentioning God, he expressed his opposition and allegedly tried to block it. As Roberson explained in a video interview seen for the first time on Breitbart News, Roberson asked Rodriguez to press forward.

When the event went forward as planned, another video first obtained by Breitbart News — the one of the retirement ceremony itself — shows Rodriguez taking his position and beginning his flag-folding speech. Four uniformed airmen surround him, forcibly seize him, and roughly drag him out of the room, as he continues shouting out his speech over the heads of his assailants.

The service members were not military police and had no lawful authority to arrest or detain any person, especially a private citizen like Rodriguez. Air Force personnel then expelled Rodriguez from the base entirely.

“It was one of the most humiliating experiences of my life,” Rodriguez says. “To have the Air Force assault me and drag me out of a retirement ceremony simply because my speech included the word ‘God’ is something I never expected from our military.”

“Mr. Rodriguez has a constitutional right to free speech and religious expression, even on a military base,” added Mike Berry, director of military affairs for First Liberty. “The military broke the law and abused its power. We expect the Air Force to hold those responsible accountable, and allow Mr. Rodriguez to continue honoring the flag and other veterans who have sacrificed for our country.”

On Sunday, First Liberty sent a letter to the U.S. Air Force and the commander of Travis Air Force Base, demanding that the Air Force: (1) issue a formal written apology to Rodriguez, (2) an admission that Air Force personnel violated his civil rights, (3) a written promise that Rodriguez is welcome to return to the base and engage in legally protected speech, and (4) “Punitive action against those determined to be responsible for violating Mr. Rodriguez’s constitutional rights.”

The letter also lists the various federal laws and provisions of the U.S. Constitution that the airmen — acting as government agents — allegedly violated by their actions, including the First Amendment, Fourth Amendment, and Fifth Amendment of the Bill of Rights. First Liberty Institute is giving the Air Force seven days to meet these demands and apologize to Rodriguez, or these lawyers will file a federal civil-rights lawsuit in U.S. district court to seek justice for this 33-year Air Force veteran.

First Liberty Institute has set up a website showing the videos and legal documents. First Liberty has also set up a separate website, www.standwithoscar.com, where Americans can sign a letter expressing their support.

Speaking exclusively with Breitbart News over the weekend, Berry further added, “Americans should be outraged at seeing uniformed military personnel drag away a decorated veteran who is honoring his friend, simply because he invoked God’s blessing with traditional remarks.”

“The Constitution condemns such authoritarian censorship,” he declared.