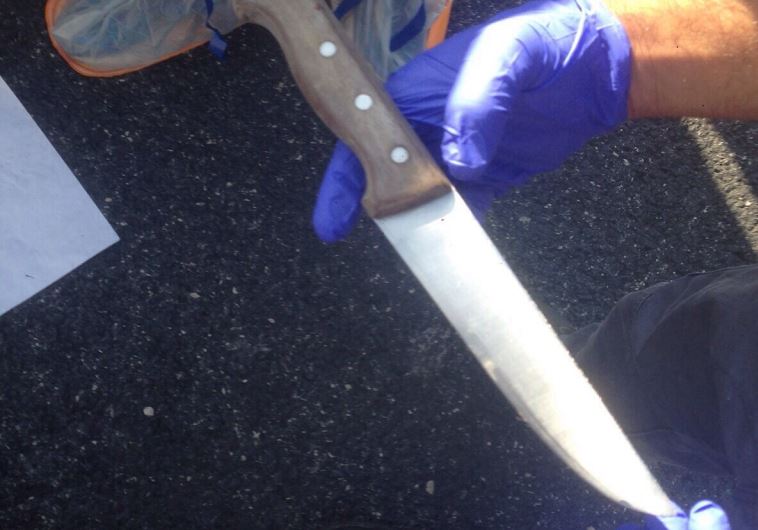 In one of the incidents, a terrorist shot dead trying to knife border policemen in Jerusalem.

A spate of attempted terrorist attacks took place over the weekend in Jerusalem and the West Bank, wounding two [more Israeli Jews].

A teenager from the southeastern Jerusalem neighborhood of Jebl Mukaber was shot dead in the nearby Armon Hanatziv neighborhood on Saturday morning when he tried to stab Border Police officers, police said.

The attack took place shortly after a concerned resident notified police there was a suspicious- looking Arab teenager on Rav Hahovel Street during the midmorning hours.

When Border Police officers arrived moments later and asked to search the suspect, he withdrew a large kitchen knife from his pocket and tried to stab them; one of the officers shot him dead.

None of the officers was wounded.

Armon Hanatziv resident Jeff Gross said he was walking to his synagogue with his wife and daughter when the shots were fired.

“I was walking to shul with my wife and nine-year-old daughter when we heard the shots,” Gross said moments after the attack.

“I ran ahead and saw border policemen surrounding the body of the [so-called] Palestinian. I went back to my family and we took a different route. I don’t need my daughter to see that.”

The attempted stabbing comes four days after two Jews were shot and stabbed to death, and three others seriously wounded, on an Egged bus by two terrorists from the adjoining Arab neighborhood, whose access has since been regulated by police checkpoints.

Jerusalem police said on Saturday night that a terrorist at the Kalandiya checkpoint, between the capital and Ramallah, pulled a knife and tried to stab a police officer, but was unable to penetrate the officer’s bulletproof vest.

The police said later that the terrorist, aged 24, was drunk when he came to the checkpoint.

Police remain on heightened alert throughout the capital, as 300 soldiers are to be dispatched on Sunday to secure the city’s public transportation system.

Also on Saturday, a [Muslim terrorist] attempted to stab an Israeli civilian in Hebron. The civilian produced a firearm and shot his attacker dead.

Later on Saturday, a terrorist stabbed and moderately wounded a soldier at a police checkpoint in the city. A second soldier shot and critically wounded the [jihadist] attacker.

The soldier was admitted to Hadassah-University Medical Center in Jerusalem’s Ein Kerem with knife wounds to his upper body.

In an attempted stabbing by a woman terrorist in Hebron on Saturday, the Border Police said the attacker approached woman officer “M.” at the checkpost outside her base and asked for directions.

When M. approached her, she said the woman tried to stab her in the neck, but hit her vest instead.

M. said she then took a step back, cocked her rifle, and shot the woman.

In Hebron on Friday, [an Arab] terrorist disguised as a photojournalist stabbed and moderately wounded a soldier at the Zayit junction outside Kiryat Arba, before he was shot dead by a second soldier.

During the incident, the attacker approached the soldier wearing a brightly colored vest printed with the word “Press” in English and carrying a camera. He suddenly produced a knife and lunged at the soldier, stabbing him, before being shot.

The wounded 20-year-old soldier was admitted in satisfactory condition with a stab wound to his upper body to Shaare Zedek Medical Center in Jerusalem.

… Also on Friday, [terrorists] fired shots at an IDF vehicle near the [Arab] village of Silwad, east of Ramallah. There were no injuries in the incident. The army said it spotted three suspects fleeing the scene and began a search of the area.

… The West Bank saw several riots during the weekend.

On Saturday, around 200 [Arabs] clashed with the IDF at the Ayosh junction, between Ramallah and Beit El. They threw gas grenades and rolled burning tires at soldiers, who responded with crowd control measures and fired low-caliber rifle rounds. The Red Crescent evacuated a number of rioters who were wounded in the clash.

Around 300 [Arabs] marched from Hebron to Halhoul Bridge and clashed with soldiers, who employed riot control measures and fired low-caliber rifle rounds at rioters’ legs. They spotted one [Arab] rioter who sustained an injury and fled the scene.

On Friday, some 150 [Arab Muslims] threw rocks at the town of Beit Umar near Hebron.

… Some 150 [Arabs] threw rocks and a pipe bomb at soldiers at the Prigat junction, south of Nablus. The IDF fired low-caliber rounds, wounding a number of rioters.

Around 80 [Arabs] hurled firebombs and homemade grenades at Rachel’s Tomb near Bethlehem on Friday. Soldiers responded by firing low-caliber rounds, resulting in a number of rioters sustaining light injuries.