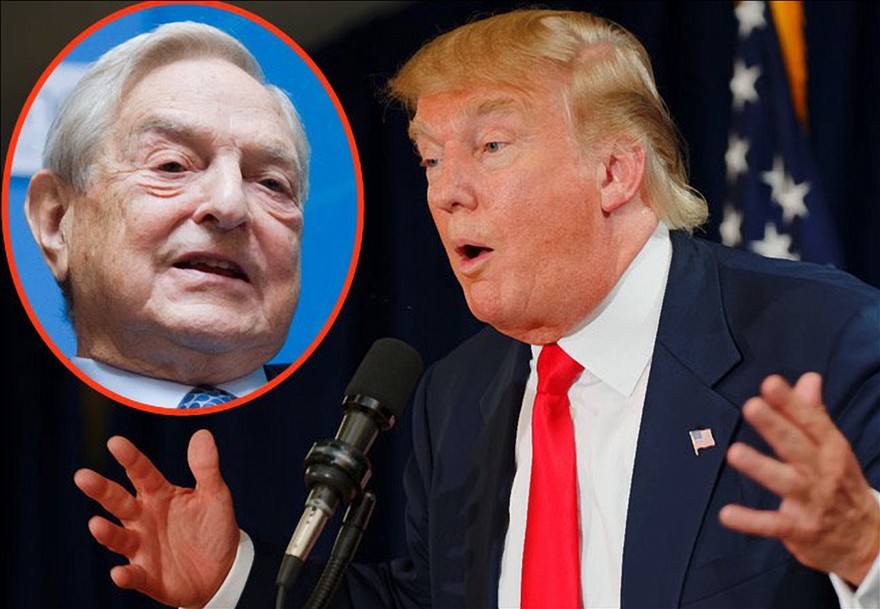 This is the same George Soros who says he feels no remorse for collaborating with Nazis during WWII to send his fellow Jews to the death camps and steal their property. You know, the same one influencing Hillary Clinton as well.

Not only has Trump funded open borders politicians like Schumer, Durbin, McCain,Graham and Menendez, but he’s also been bailed out by George Soros.

Trump actually spent Christmas Eve with George Soros in 2009, according to the New York Post.  But hey, billionaires gotta stick together, you know?  Nevermind that Soros is for a One World Order, an anti-Zionist and an anti-constitutional funder of all things unholy.

The funder of all things unholy also funded the Trump Tower in Chicago. According to the Chicago Tribune:

Donald Trump has lined up three New York hedge funds, including money from billionaire George Soros, to invest $160 million in his Chicago skyscraper, a key piece in perhaps the largest construction financing in the city’s history, according to real estate sources and public documents.

Soros gave Donald Trump a mezzanine loan, which is basically a bailout, because Trump didn’t want to, or couldn’t, front his own money to build the Chicago Trump Tower.  Mezzanine loans are loans offered with outrageous interest that help the developer on the front end of finance, and which often offer a stake in the building.

Trump was also named in a lawsuit along with Soros in New York surrounding the sale of the GM Building, so it’s not as if Trump only dealt with Soros in Chicago.

Many Trump supporters might think this is no big deal—that businessmen have to do business with people they may personally not like.  However, in 2011, when considering a White House bid, Trump attended a Tea Party rally and told people to, “Leave George Soros alone, he has enough problems,” giving the distinct impression that Trump might just owe the global manipulator money. The magnitude of the George Soros identity is not known universally.

George Soros has a messianic complex, the likes of which he has said he needs to keep in check because otherwise he’d be in a loony bin.

Soros’ main cause is embodied in his Open Society Foundations, which he believes is an extension of his education that focused on Karl Popper’s philosophy.  Popper taught at the London School of Economics when Soros attended, and Soros has stolen Popper’s vision and turned it inside out.

The Open Society and It’s Enemies is a book Popper wrote during WWII that denounced Marxism and glorified democracy.  However, Soros has twisted Popper’s overall philosophical arguments against Marxism and for democracy into a destroy borders at all cost, totalitarian Marxist worldwide order, centered on zero borders so that a chosen few can rule the globe.   Soros was widely speculated as the person who bet on America’s downgrade and partially caused our economy to tank in 2008.  Soros’ Foundation and the vast network of hundreds of groups that he funds are all centered around mass migration, and he contributes to the same politicians that Donald Trump does.  In fact, Trump has over the years contributed to Soros’ pet projects like dosomething.org, a website dedicated to youth political correctness.

The groups Soros funds are the most anti-American groups that plague this nation.  Through his funding for activists, Soros’ army of Leftists twists and turns the agenda of the nation.  Most recently, Soros funded Occupy Wall Street and the Ferguson protests, as well as Media Matters and MoveOn.org.

The master of “dark money,” Soros funds the underbelly of Leftist chaos. Like Trump, he’s given to John McCain and the Clinton Foundation. Trump actually contributed a quarter of a million dollars to the Clintons, and though some might believe Trump was a hapless bystander in a swirl of political demands, understand that the entire Democratic Party, with all its constant demand for social change, held a place in Trump’s heart too, very recently.

Trump called for the impeachment of George W. Bush, taking the Leftist view of partisan destruction, saying that Bush lied about going to war.  This argument was pushed non-stop on Media Matters and Move On and the Leftists seized the national narrative of “Bush lied, people died.”  That libelous inflammatory rhetoric was a Soros special.

Soros once said that removing President George W. Bush from office in 2004 was the ‘central focus of my life.’  He put his money where his mouth is, giving $23.58 million to various 527 groups dedicated to defeating Bush.

Donald Trump has admitted to having a great relationship with Nancy Pelosi, putting his money where his mouth is and opening his moth-filled wallet.  But it was a special and deliberate appeal for a cause. “I was surprised that she (Pelosi) didn’t do more in terms of Bush and going after Bush,” Trump said. “It was almost – it just seemed like she was going to really look to impeach Bush and get him out of office, which personally I think would have been a wonderful thing.”

Trump did not feel the same loathing for, nor did he take a political risk for the impeachment of, the most unconstitutional Leftist president this nation has ever seen, Barack Obama, telling the Putin apologist Alex Jones: “In a way you’ll make him a martyr. But I don’t even say that. I’m the most disappointed in Republicans.”

When you look at the people Donald Trump surrounds himself with, you couldn’t rightly say he’s aware of the types he gets into contracts and political causes with.  However, his history shows either an ignorance or stamped approval of who these people are and what they wish to accomplish.

The tentacles of worldwide dominance includes Trump, while he gives money to the worst politicians, preaches deal-making as a beatitude, and gets along with the most ruthless destroyers of America.

That’s not all. A leaked Soros memo shows the this whole “refugee crisis” is just a “path to power”. Trump has already flip-flopped on illegal amnesty.

A leaked memo from left-wing financier George Soros’s Open Society Foundations argues that Europe’s refugee crisis should be accepted as a “new normal,” and that the refugee crisis means “new opportunities” for Soros’ organization to influence immigration policies on a global scale.

One of the purposes of the review, Crowley and Rosin write in the introduction, is to “consider the effectiveness of the approaches we have used to achieve change at the international level.”

A section of the review titled “Our Work” describes how America’s least transparent think tank has worked with “leaders in the field” to “shape migration policymaking and influence regional and global processes affecting the way migration is governed and enforced.”

In a section titled, “Our Ambitions,” the authors explain: “Our premise for engaging in work related to governance was that, in addition to mitigating the negative effects of enforcement, we should also be supporting actors in the field proactively seeking to change the policies, rules, and regulations that govern migration.”

“We also believed that advances at the regional or international levels could create impetus for policy change or implementation of existing norms at the national level. We deliberately avoided the term ‘global governance’ because there is no single system at the global level for managing migration.”

The same section later states that IMI “has had to be selective and opportunistic, particularly at the global level, in supporting leaders in the field to push thinking on migration and better coordinate advocacy and reform efforts. We have supported initiatives, organizations, and networks whose work ties directly to our aims in the corridors.”

“Early on, IMI identified a handful of organizations able to engage on migration globally and transnationally, elevating IMI’s corridor work beyond the national level,” reads another section of the memo, entitled “Our Place.”

“These included key think tanks such as the Migration Policy Institute (MPI) and advocacy networks such as the International Detention Coalition (IDC).” (The authors later note that MPI, a strong advocate of amnesty for illegal immigrants in America, “is sometimes criticized for its closeness to governments, [but] flexible funding from OSF has allowed it to maintain some independence from the governments it advises.”)

The memo also notes that “IMI played a central role in establishing and influencing the goals of two new [European Programme for Integration and Migration] sub-funds on the Common European Asylum System (CEAS) and immigration detention.”

The authors note that “the current refugee crisis is creating space to reconsider the governance of migration and the international refugee regime.”

One reason for this is that the developing countries that make up the Group of 77 at the United Nations were motivated by the refugee crisis to keep immigration issues on the “global agenda,” the memo states.

“The refugee crisis and the fear that the interests of migrants fleeing poverty, climate change, generalized violence, or natural disaster would be overlooked at these fora have generated a push from G77 countries to ensure other migration issues remain on the global agenda.”

They later explain that the current crisis provides “new opportunities” for influencing immigration policy on a global scale.

“The current climate presents new opportunities for reforming migration governance at the global level, whether through the existing multi-lateral system, or by bringing together a range of actors to think more innovatively. Our long-standing interest and investment in global work means we have many of the right partners and are positioned to help others navigate this space.”

Additionally, the review states, “The refugee crisis is opening new opportunities” for “coordination and collaboration” with other wealthy donors.

According to the review, immigration policy-makers need to accept the refugee crisis as a “new normal.”

One of the conclusions listed in the memo is, “Accepting the current crisis as the new normal and moving beyond the need to react.”

“Observing our partners as they respond and adjust to the new reality in light of the crisis in Europe and the Mediterranean, we see little attention given to long-term planning or fundamentally new approaches to advocacy.” The conclusion also stresses the need to fight back against “growing intolerance toward migrants.”

OSF has not yet returned The Daily Caller’s request for comment.