Islam is the only protected religion. 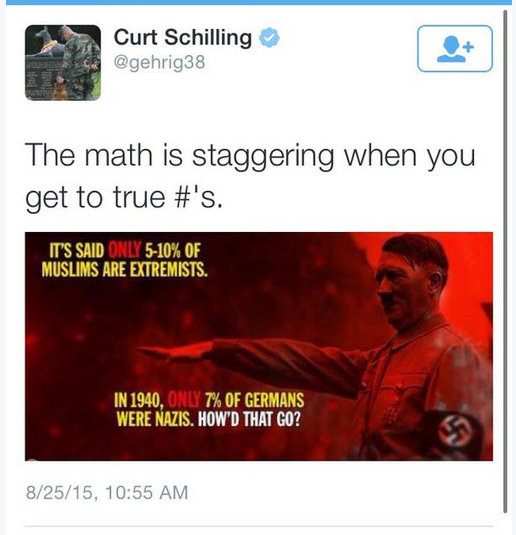 So called “extremists” – that terminology is used to defend Islam. Islam is a barbaric religion of war and death. The vast majority of Muslims support the ideologies of terrorism. Only 5-10% actually admit it. Where are those Muslims who stand up against jihad?

Schilling deleted the tweet after blowback. ESPN released a statement upon suspending Schilling:

Curt’s tweet was completely unacceptable, and in no way represents our company’s perspective. We made that point very strongly to Curt and have removed him from his current Little League assignment pending further consideration.

The tweet was offensive – to [Muslim terrorists]. Factually speaking, there were approximately 6.5 million formal members of the Nazi Party in 1940, out of a total German population of well over 80 million – a little over 8 percent. That number of members did not fully represent the level of support for the Nazi regime in Germany in 1940, of course.