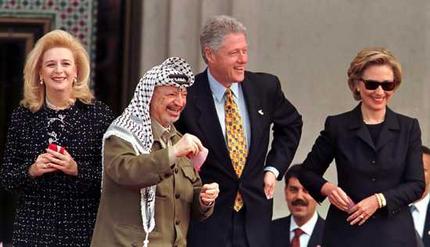 Drip, drip, drip.  Last week, we learned that the Clinton Foundation had failed to report tens of millions of dollars in foreign government donations in their tax filings, a revelation that has forced them to go back and amend at least five years’ worth of documents. In three of those years — all during Hillary Clinton’s tenure at State — the organization falsely listed foreign government income at $0. Yesterday, we discovered that at least 1,100 individual donors, many of them non-US citizens, managed to anonymously contribute to the Clintons’ money pot through a Canadian offshoot “charity.”  Team Clinton’s justification has completely fallen apart, with the New York Times piling on this morning. This secretive windfall violated the transparency agreement she signed upon joining the Obama administration as America’s top diplomat. The idea, of course, was to provide the American people with an open look at any outside influences that may have been trying to pay for access and favor. Hillary broke those rules, just like she ignored “clear cut” regulations on private email usage and did so in the most egregious way imaginable (secret, insecure, private server, with tens of thousands of emails deleted and then wiped clean, without any oversight).  Today, the Boston Globe  blazes another path down the Clinton foreign money trail:

An unprecedented ethics promise that played a pivotal role in helping Hillary Rodham Clinton win confirmation as secretary of state, soothing senators’ concerns about conflicts of interests with Clinton family charities, was uniformly bypassed by the biggest of the philanthropies involved. The Clinton Health Access Initiative never submitted information on any foreign donations to State Department lawyers for review during Clinton’s tenure from 2009 to 2013, Maura Daley, the organization’s spokeswoman, acknowledged to the Globe this week. She said the charity deemed it unnecessary, except in one case that she described as an “oversight.” During that time, grants from foreign governments increased by tens of millions of dollars to the Boston-based organization. Daley’s acknowledgement was the first by the charity of the broad scope of its apparent failures to fulfill the spirit of a crucial political pledge made by the Clinton family and their charities. The health initiative has previously acknowledged failing only to disclose the identity of its contributors, another requirement under the agreement. The failures make the Clinton Health Access Initiative, which is headquartered on Dorchester Avenue in South Boston, and goes by the acronym CHAI, a prominent symbol of the broken political promise and subsequent lack of accountability underlying the charity-related controversies that are dogging Clinton as she embarks on her campaign for president. The charity defended the lack of some disclosures on the grounds that the donations in question were simply passed through the charity to fund an existing project. Previously, it has acknowledged that mistakes were made.

Abiding by rules wasn’t necessary, they “deemed,” except in rare cases — and then “mistakes were made.”  The result was many millions in foreign dollars (including from foreign governments) flowing into what a transparency watchdog has termed the Clinton “slush fund.”  Allahpundit reminds us of the manufactured and utterly groundless panic Democrats attempted to foist upon voters in the days leading up to their 2010 electoral drubbing: Secret foreign cash is buying this election for Republicans!  It was nonsense, and Democrats outspent Republicans that year anyway, but Democrats were dutifully “scandalized” and very angry about it all.  Here we have actual secret foreign money pouring into Chez Clinton, and Democrats will merrily nominate Hillary for president.  Shameless.  By the way, is all of this unseemliness giving some Clinton donors cold feet?  (At least the ones who aren’t on a lavish African safari with Bill and Chelsea, of course).  Perhaps so.  But you’d imagine they’ll get over it once media coverage cools off.  Until then, Hillary is fundraising off of her corrupt fundraising.  Neat trick, that.  Meanwhile, Mrs. Clinton has come out against a White House-supported free trade deal, despite assurances from the Obama people that she was on board.  Her move is cynical and self-interested (natch),  and above all, a left-flank-protection maneuver.  After getting bitten by Obama in 2008, Hillary isn’t taking any chances.  She’s running hard left on almost every divisive issue in an effort to fend off quixotic challenges from people like Bernie Sanders and Martin O’Malley.  The Washington Post has a front page story today detailing the many ways in which Hillary Clinton is running against her husband’s agenda:

Hillary Rodham Clinton isn’t just running against Republicans. She’s also running against parts of her husband’s legacy. On issues large and small, the Democratic presidential contender is increasingly distancing herself from — or even opposing — key policies pushed by Bill Clinton while he was in the White House, from her recent skepticism on free-trade pacts to her full embrace of gay rights. The starkest example yet came Wednesday, when Hillary Clinton delivered an impassioned address condemning the “era of incarceration” ushered in during the 1990s in the wake of her husband’s 1994 crime bill — though she never mentioned him or the legislation by name.

The media loves to engage in endless concern-trolling about the rightward drift of the GOP, with a long line of commentators and elected Democrats asserting that Ronald Reagan himself couldn’t win the Republican nomination these days. In truth, the Democrats have lurched dramatically to the left. The Bill Clinton of 1992 and 1996 would be ostracized and marginalized in Elizabeth Warren and Barack Obama’s Democratic Party, and probably called a homophobic racist to boot. This devolution is perhaps illustrated most clearly by the party’s intensifying hostility to religious freedom; Democrats now widely abhor a law that was co-sponsored by Ted Kennedy and Chuck Schumer, and that passed Congress nearly unanimously before being signed by President Clinton. Democrats’ enduring advantage on their hardening left-wing ideology: A mainstream media establishment that largely agrees with them. They’ll throw the flag on the Clintons’ breathtaking influence-peddling schemes in the early going, but when the chips are down, better to have an abortion-supporting (newfound) gay marriage advocate in the White House than…one of those people.  I’ll leave you with a friendly suggestion for supporters of the trade deal Hillary to which Hillary is suddenly opposed:

Trade plan supporters, I hear Bill is available for a $500k speech that might “fix” this. (wink) https://t.co/yZZ3hlvagn