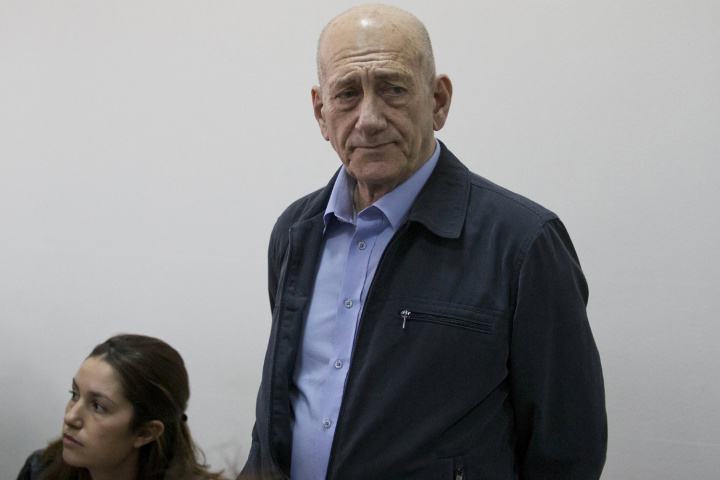 For so many years, JTF told you so!

JERUSALEM — Former Israeli Prime Minister Ehud Olmert was convicted Monday of unlawfully accepting money from a U.S. supporter in a retrial on corruption charges, the latest chapter in the downfall of a man who only years earlier hoped to lead the country to a historic peace agreement with the Palestinians.

The conviction could land Olmert five years in prison, in addition to a six-year prison sentence he received last year in a separate bribery conviction, all but ensuring the former premier will not return to politics for many years to come.

“His behavior constitutes a breach of trust which harms the public, harms morality, and harms the public’s trust, in how he behaved corruptly,” prosecutor Uri Korev said following the verdict.

Olmert’s lawyers said they would likely appeal the ruling by the Jerusalem District Court. A sentencing hearing is slated to take place in May.

Olmert has claimed he was on the brink of a historic agreement with the Palestinians when he was forced to resign in early 2009 amid corruption allegations. His departure cleared the way for hard-liner Benjamin Netanyahu’s election, and subsequent peace efforts have not succeeded.

Olmert, 69, was acquitted in 2012 of a series of charges that included accepting cash-stuffed envelopes from U.S. businessman Morris Talansky when Olmert was mayor of Jerusalem and a Cabinet minister. Olmert was found to have received about $600,000 from Talansky during his term as mayor, and additional amounts in cash during his term as a Cabinet minister, but a court did not find evidence the money had been used for unlawful personal reasons or illegal campaign financing.

Talansky, an Orthodox Jew from New York’s Long Island, had testified the money was spent on expensive cigars, first-class travel and luxury hotels, while insisting he received nothing in return.

The acquittal on the most serious charges at the time was seen as a major victory for Olmert, who denied being corrupt. He was convicted only on a lesser charge of breach of trust for steering job appointments and contracts to clients of a business partner, and it raised hopes for his political comeback.

But Olmert’s former office manager and confidant Shula Zaken later became a state’s witness, offering diary entries and tape recordings of conversations with Olmert about illicitly receiving cash, leading to a retrial. In the recordings, Olmert is heard telling Zaken not to testify in the first trial so she would not incriminate him.

On Monday, a panel of judges at the Jerusalem District Court ruled that Olmert had accepted $153,950 from Talansky when he was a Cabinet minister, with the money kept hidden in a safe by an Olmert aide.

The judges concluded that Olmert gave Zaken part of that money in exchange for her loyalty, and used the money for his own personal use without reporting it according to law. They convicted him on a serious charge of illicitly receiving money, as well as charges of fraud and breach of trust.

Olmert’s lawyer, Eyal Rozovsky, said Olmert’s legal team was “of course very disappointed” by the ruling and will likely appeal.

The conviction stoked anger in Israel.

“I want Ehud Olmert to apologize to the people of Israel,” said columnist and former Olmert confidant Dan Margalit on Israel Radio Monday.

In a separate trial in March 2014, Olmert was convicted of bribery over a Jerusalem real estate scandal and was sentenced to six years in prison. He appealed and has been allowed to stay out of prison until a verdict is delivered.

Now, the judges must decide whether Olmert should serve additional prison time for Monday’s conviction, or whether his six-year sentence is enough of a punishment for both offenses, legal expert Emanuel Gross said.

“It’s a very, very serious task that the court is going to face, to punish a (former) prime minister for a crime after the court knows he’s been convicted with bribery,” Gross said.

At the time Olmert resigned as prime minister, Israel and the Palestinians had been engaged in more than a year of intense negotiations over the terms of Palestinian independence. The Palestinians seek all of the West Bank and east Jerusalem, in addition to the Gaza Strip, for an independent state. Israel occupied all three areas in the 1967 Mideast war, though it withdrew from Gaza in 2005.

Since leaving office, Olmert has said he presented the Palestinians the most generous Israeli proposal in history, offering roughly 95 percent of the West Bank, along with a land swap covering the remaining 5 percent of territory. In addition, he proposed international administration in east Jerusalem, home to the city’s most sensitive religious sites.

Palestinian officials have said that while progress was made, Olmert’s assessment was overly optimistic.

A slew of high-profile Israeli politicians have been convicted of corruption in recent years. In 2009, former Finance Minister Avraham Hirschson was sentenced to more than five years imprisonment for financial misdeeds and former Cabinet Minister Shlomo Benizri was sentenced to four years in prison for bribes.

Israeli Foreign Minister Avigdor Lieberman was for years at the center of a corruption probe, and stepped down as foreign minister, but returned to office in 2013 after being cleared of the charges. At the end of last year, 30 public figures and politicians linked to Lieberman’s political party were singled out in a corruption investigation that is still ongoing.