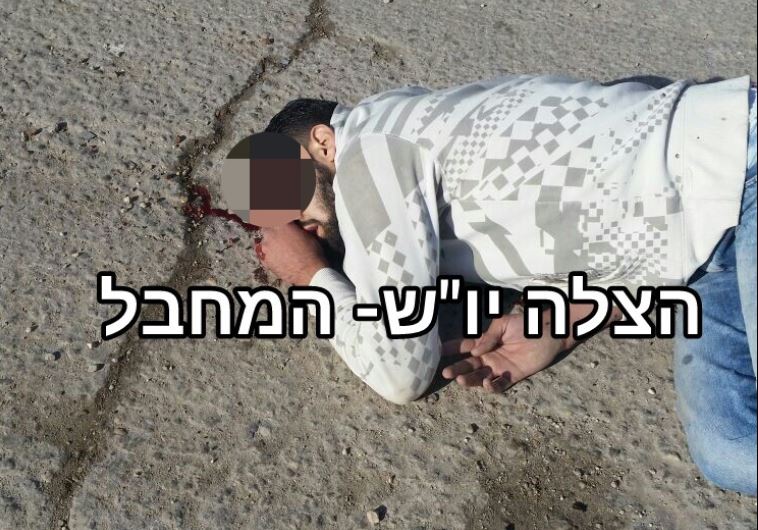 The Arab Muslim terrorist was shot dead during the vicious anti-Semitic stabbing attack.

An Arab Muslim terrorist stabbed and lightly wounded an IDF soldier in the head near a checkpoint in the West Bank city of Hebron on Thursday morning.

The West Bank town of Hebron was the scene of two separate knife attacks against [Jews] on Thursday morning, resulting in the shooting deaths both [terrorists].

[An Arab Muslim terrorist] stabbed and lightly wounded an IDF soldier in the head near a checkpoint in the West Bank city of Hebron on Thursday morning.

The officer quickly recovered from the attack and chased the assailant who tried to stab a border policeman at the scene.

Another Border Police officer standing nearby shot and killed the knife-wielding [terrorist], according to a police statement.

The soldier was treated at the scene and transported by Magen David Adom ambulance to the Hadassah University Medical Center in Jerusalem’s Ein Kerem.

The attack occurred on the sidelines of a violent clash between [Arab Muslim Nazis] and security forces near a checkpoint on the road in between the Kiryat Arba settlement and the Cave of the Patriarchs.

“At approximately 8:08 a.m., Magen David Adom rescue services in Jerusalem received an urgent report about a young man wounded in a stabbing attack on the road connecting Hebron and Kiryat Arba,” the Magen David Adam first response organization said in a statement.

“From initial reports, the young man was immediately treated at the scene by IDF medics and was later examined by MDA paramedics,” the MDA said.

The stabbing victim was due to be evacuated to hospital by military vehicle. He is listed in light condition with injuries to his head and upper body.”

It was the fifth such incident in Hebron this week, in which [an Arab] stabbed or attempted to stab soldiers and Border Police.

Just hours later, a [terrorist] armed with a knife was shot by security forces after attempting to stab an Israeli in the Beit Hadassah complex in Hebron. The assailant was shot and killed. No Israelis were injured in the attack.