Parents in Farmville, North Carolina want to know why their children were given a Common Core vocabulary assignment in an English class that promoted the Prophet Muhammad and the Islamic faith. 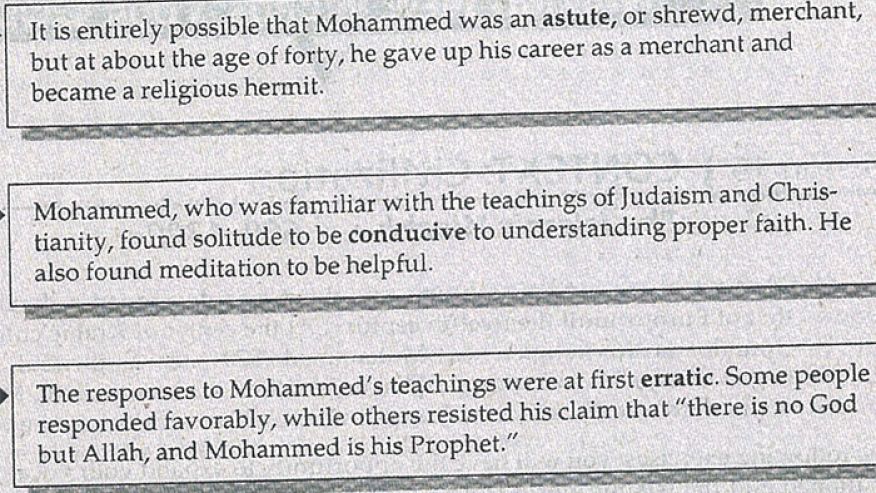 “It really caught me off guard,” a Farmville Central High School student who was in the class told me. “If we are not allowed to talk about any other religions in school – how is this appropriate?”

The Islamic vocabulary worksheet was assigned to seniors.

“I was reading it and it caught me off guard,” the student told me. “I just looked at it and knew something was not right – so I emailed the pages to my mom.”

“In the following exercises, you will have the opportunity to expand your vocabulary by reading about Muhammad and the Islamic word,” the worksheet read.

The lesson used words like astute, conducive, erratic, mosque, pastoral, and zenith in sentences about the Islamic faith.

“The zenith of any Muslim’s life is a trip to Mecca,” one sentence read. For “erratic,” the lesson included this statement: “The responses to Muhammad’s teachings were at first erratic. Some people responded favorably, while other resisted his claim that ‘there is no God but Allah and Muhammad his Prophet.”

Another section required students to complete a sentence:

“There are such vast numbers of people who are anxious to spread the Muslim faith that it would be impossible to give a(n)___ amount.”

I spoke to one parent who asked not to be identified. She was extremely troubled by what her child was exposed to in the classroom.

The parent said the material was classwork disguised as Islamic propaganda.

“It’s very shocking,” she said. “I just told my daughter to read it as if it’s fiction. It’s no different than another of fictional book you’ve read.”

A spokesman for Pitt County Schools defended the lesson  – noting that it came from a state-adopted supplemental workbook and met the “Common Core standards for English Language Arts.”

“The course is designed to accompany the world literature text, which emphasizes culture in literature,” the statement read.

The problem is it’s emphasizing a specific culture and religion – and the school district acknowledged there were concerns “related to the religious nature of sentences providing vocabulary words in context.”

“Our school system understands all concerns related to proselytizing, and there is no place for it in our instruction,” the statement goes on to say. “However, this particular lesson was one of many the students in this class have had and will have that expose them to the various religions and how they shape cultures throughout the world.”

I asked the school district to provide me with a copy of vocabulary worksheets that promoted the Jewish, Hindu and Christian faiths.

The school district did not reply.

I also asked for the past or future dates when the students would be given those vocabulary worksheets.

The school district has yet to reply.

The student I spoke with told me they have not had any other assignments dealing with religion – other than the one about Islam.

Why is that not surprising?

Based on its official statement, Pitt County Schools seems confident that the vocabulary lessons are in compliance with three Common Core standards related to literary. If you want to look up those standards, reference CCSSELA-Literary L11-12.4.A, 12.4.D and 12.6.

Since the Common Core folks seem to be infatuated with sentence completion – let me try one out on them.

Use “Islamic” and “proselytizing” in the following sentence: Somebody got their ____ hand caught in the ____ cookie jar.