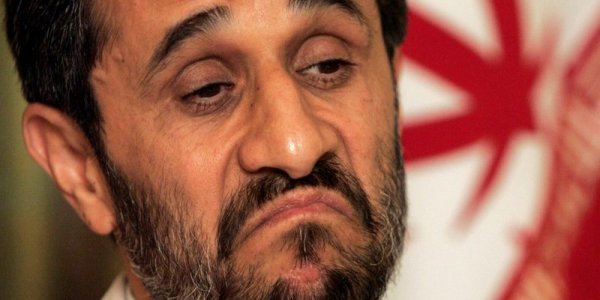 Even though out of office, his anti-U.S. rhetoric hasn’t been toned down.

Earlier this week, Ahmadinejad accused the U.S. of trying to arrest the Shia Muslim messiah, known as the “hidden imam.”

The charge came in a speech to clerics and supporters translated by Radio Free Europe.

Some Shia Muslims, Ahmadinejad among them, are expecting the imminent return of the “hidden imam” or “Mahdi” – the 12th in a series of Shia religious figures born in the 9th century.

“They’ve done so much research about the Hidden Imam in the human science universities of the United States that I am not exaggerating by saying that it is a thousand times more than all the work done in the seminaries of Qom, Najaf, and Mashhad,” he told the group, in reference to the three Shia holy cities in Iran and Iraq.

Ahmadinejad added: “To quote a friend, they’ve completed a case against the Hidden Imam, and closed it also for his arrest” for fear his return would end the American “empire.”

“It is really a government established by Satan to prevent reaching God and the hidden imam. … This evil government knows that its end will come if the Hidden Imam reappears,” he railed.

Known internationally as “Twelvers,” radical Shiite Muslims like Ahmadinejad believe the new order will come with the return of their messiah, the Mahdi – the child imam who supposedly went into seclusion at the bottom of a well more than 1,000 years ago. He will return, they say, with Jesus Christ, who will declare himself a Muslim and put to death Christians.

In a speech to the United Nations General Assembly years ago when he was serving as president, Ahmadinejad seemed to indicate, in his closing lines, that the return of the Mahdi is near, employing the metaphor of “spring” that also has been used to describe the recent revolutions across the Middle East.

He said the Mahdi will “bless humanity with a spring that puts an end to our winter of ignorance, poverty and war with the tidings of a season of blooming.”

“Now we can sense the sweet scent and the soulful breeze of the spring, a spring that has just begun and doesn’t belong to a specific race, ethnicity, nation or a region, a spring that will soon reach all the territories in Asia, Europe, Africa and the U.S.”