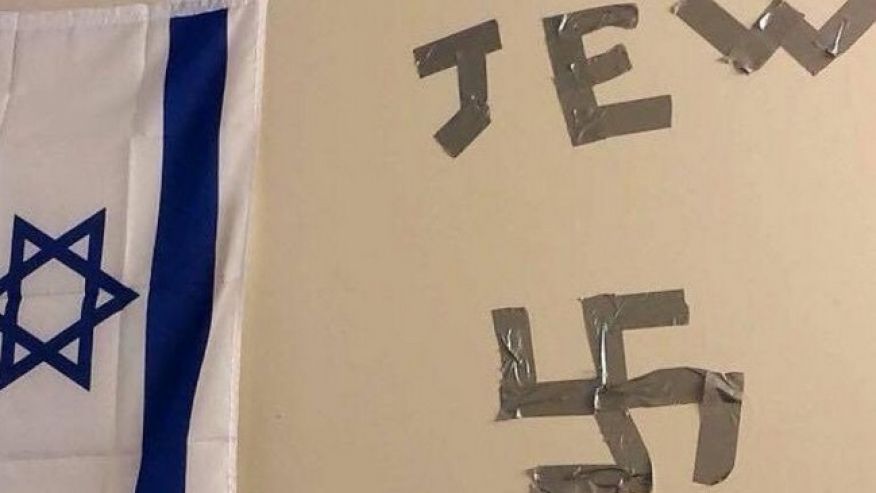 “This is not the first expression of anti-Semitic sentiment on our campus.”

Drexel University can now be added to the long list of campuses marred by anti-Semitic vandalism this academic year.

A Jewish student at the University who chose to display an Israeli flag on his dorm room door found this display of support for Israel vandalized with a swastika and the word “Jew” spelled out with pieces of duct tape.

“I was deeply distressed to learn of an incident that occurred in one of our residence halls, in which a student was targeted on the basis of religion with the posting of a hate symbol,” wrote Drexel president John Fry in a statement to the University community. “Whether this malicious act was a hate crime or just blatant ignorance, it is unacceptable and incompatible with the ethos of our University.”

The name of the Jewish victim of this vandalism has not been released, but according to Rabbi Howard Alpert, the CEO of Hillel of Greater Philadelphia, he “was heavily involved in Jewish life on campus” and “is someone who is quite open both in the pride in which he takes in being part of a Jewish community and in his support for Israel.”

“Unfortunately this is not the first expression of anti-Semitic sentiment that has outwardly manifested on our campus,” states a letter signed by the heads of several campus Jewish groups. “While Jews on Drexel’s campus generally do not feel threatened, instances like this are unacceptable and compromise the inclusive atmosphere that we have come to appreciate and expect here on campus.”

In a statement to the campus on Friday, Drexel Hillel Executive Director Rabbi Isabel de Koninck reported that “The suspects (known to the victim) turned themselves in and the University is currently wrapping up its investigation of this incident. We expect disciplinary charges to follow shortly.”