Lawsuit: Public school forced my child to convert to Islam 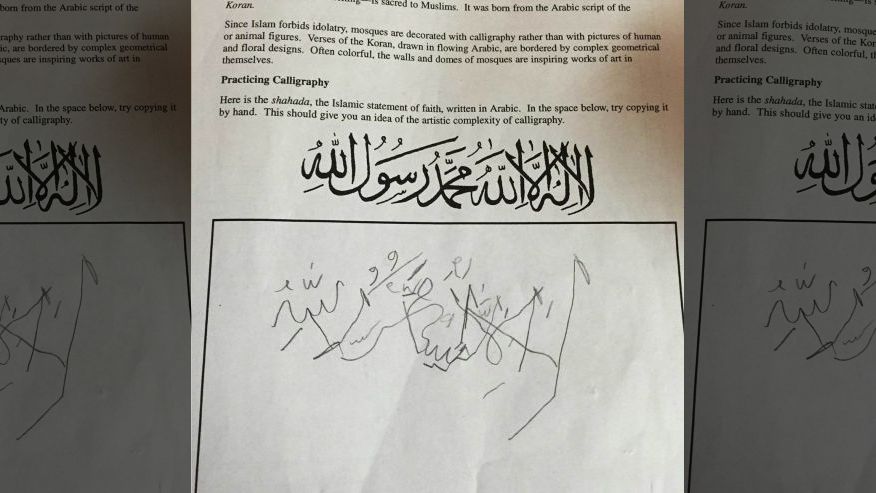 A public high school has been accused of Islamic indoctrination by forcing children to profess the Muslim statement of faith, ordering them to memorize the Five Pillars of Islam and teaching that the faith of a Muslim is stronger than the average Christian [or Jew], according to a federal lawsuit filed Wednesday.

Thomas More Law Center filed the lawsuit on behalf of John and Melissa Wood. They accuse La Plata High School in Maryland of subjecting their teenage daughter to Islamic indoctrination and propaganda. And when Mr. Wood complained – the school banned him from campus.

The Shahada is the Islamic Creed, “There is no god but Allah, and Muhammad is the messenger of Allah.”

The Thomas More Law Center said that for non-Muslims, reciting the statement is sufficient to convert one to Islam.

“The course also taught false statements such as Allah is the same G-d worshiped by [Jews and] Christians, and Islam is a ‘religion of peace,’” Thompson said.

Good grief. It sounds as if somebody turned La Plata High School into a taxpayer-funded Madrassa.

A spokesperson for Charles County Public Schools told me they have not seen the lawsuit and declined to comment.

Also named as defendants were the Charles County Board of Education, principal Evelyn Arnold and vice-principal Shannon Morris.

The lawsuit, filed in federal court, alleges that students spent only one day studying Christianity and two weeks studying Islam.

“During its brief instruction on Christianity, Defendants failed to cover any portion of the Bible or other non-Islamic religious texts, such as the Ten Commandments,” the lawsuit states. “Instead, the class included disparaging remarks about Christianity and the Pope.”

Students were also allegedly instructed that “the Islamic religion is a fact while Christianity and Judaism are just beliefs.”

“Such discriminatory treatment of Christianity is an unconstitutional promotion of one religion over another,” Thompson said.

“United States Supreme Court precedent does not create a double standard that allows for the promotion of Islam in our public schools while disallowing and silencing teachings of Christianity and Judaism,” the lawsuit states.

According to copies of classroom assignments, the school taught that “Most Muslims’ faith is stronger than the average Christian.”

They also instructed students that Islam is a peaceful religion and they treated conquered nations with kindness and respect.

On a side note, I’m sure there are plenty of Syrian and Iraqi Christians who would love to weigh in on that classroom lesson.

The school also served as apologists for the Islamic faith, according to a hand out titled, “Islam Today.”

“Nowhere in the Koran does it say you will go to paradise if you martyr yourself with a suicide bomb,” the handout stated. “Important: The majority of Muslims do not live this way.”

The school also instructed students on jihad “a holy war waged on behalf of Islam as a religious duty; a personal struggle in devotion to Islam especially involving spiritual discipline.”

If La Plata High School wanted to teach children about jihad, they should’ve replayed the video footage of what happened on September 11, 2001 – or the Boston Marathon bombing – or the San Bernardino massacre or the Chattanooga attacks.

The incidents alleged in the lawsuit occurred during the 2014-15 school year.

Wood, who is a Marine veteran, called the school on Oct. 22, 2014 to voice his alarm over his daughter’s assignments. He requested his daughter be allowed to opt-out of the lessons and be given an alternative assignment.

The following day the vice principal told Wood that his daughter was required to take the class and would receive “zeros” on any incomplete assignments even if the assignments violated the family’s religious beliefs and heritage.

It’s unclear what was said in the telephone conversations – but on Oct. 24th Wood was notified by the school’s resource officer that he would no longer be allowed on school property – for any reason whatsoever.

Wood contends in the lawsuit that he never threatened any physical harm against the school or anyone in the school.  The lawsuit alleges the ban is unfounded and retaliatory.

Folks, our public schools have become indoctrination centers – promoting Islam and marginalizing every other religion. I’ve reported on similar incidents across the country.

Why hasn’t the Freedom From Religion Foundation weighed in? What about the American Civil Liberties Union? Their silence is peculiar.