An Arab driver plowed down three policemen, one of whom, a woman, is injured. Stabbers shot dead in Hevron, Jerusalem. 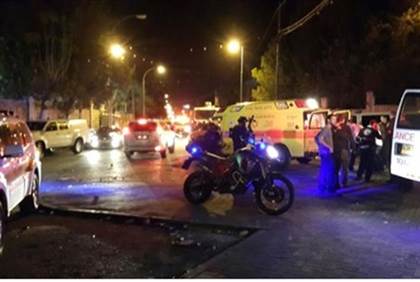 In what appears to be the third terror attack against Jews in about 24 hours, an Arab driver plowed down three people Saturday evening on the Kohanim Route in eastern Jerusalem.

MDA medics gave the three initial care and were evacuating them to Shaarei Tzedek hospital. One of the three, reportedly a Border Policewoman, is moderately injured, with wounds to the pelvis and extremities. The two others are lightly injured.

“A Skoda car drove from the direction of the Mount of Olives cemetery to the Mukased Hospital. At the Salman al-Farsi junction it drove onto the pavement and hit three policemen. Shots were fired at the car, that kept on driving down Salman al-Farsi. The area was combed and the car that struck the policemen was located. The search continues for the terrorist.”

The car that carried Jerusalem Mayor Nir Barkat to the location of the attack also came under attack when Arabs threw rocks at it. A rock caused light damage to the car but hurt no one.

A Border Policeman was wounded Saturday after being stabbed by an Arab terrorist outside the Cave of the Patriarchs in Hevron.

The attacker was shot dead on the spot by other officers.  He was identified as 20-year-old Assad al-Salayma.

His victim was evacuated to Shaarei Tzedek hospital in Jerusalem with stab wounds to his upper body, after receiving emergency first aid at the site, and is in moderate condition.

The incident took place at around 6:15 p.m. at the entrance to the Cave. According to eyewitnesses, the terrorist approached a checkpoint, drew a knife and immediately ran towards a group of border policemen, stabbing one of them repeatedly in the head and torso before being neutralized.

Another terror attack was foiled Friday night, when an Arab youth aged 16 tried to stab a female Border Police officer at the A-Zaim checkpoint in eastern Jerusalem. Policemen at the checkpoint shot and killed him. The policewoman was not hurt.