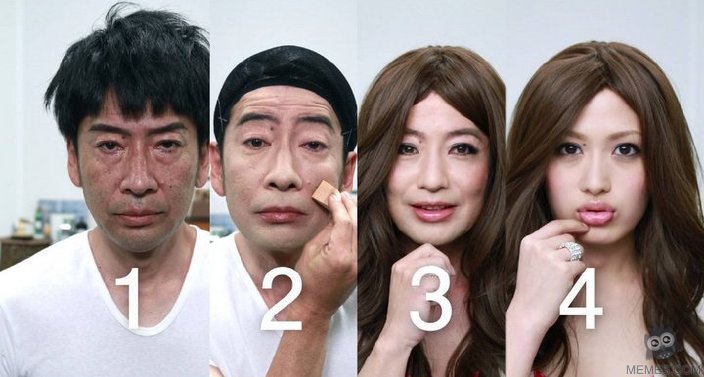 If transvestites declare themselves women and reduce their testosterone below 10 nmol/L for at least 12 months prior to competition, they can compete against ladies.

… According to transgender guidelines approved by the International Olympic Committee, genitalia does not serve as a prerequisite. The guidelines state: “To require surgical anatomical changes as a pre-condition to participation is not necessary to preserve fair competition and may be inconsistent with developing legislation and notions of human rights.”

Cyd Zeigler at OutSports.com reported on the policy change.

The IOC held a “Consensus Meeting on Sex Reassignment and Hyperandrogenism” in November at which they created the new guidelines, loosening prior rules adopted in 2004 to allow transgender athletes into the Games. The previous rules required that transgender athletes must have undergone external genitalia changes and removal of gonads, as well as obtaining legal recognition of their assigned sex  from appropriate official authorities.

The new guidelines attempt to justify themselves by citing various societies’ acceptance of fluid gender identity, writing, “Since the 2003 Stockholm Consensus on Sex Reassignment in Sports, there has been a growing recognition of the importance of autonomy of gender identity in society, as reflected in the laws of many jurisdictions worldwide.”

The IOC ignores evidence that the fairness of male to female transition still leaves men larger in general than the women they compete against. As Robert S. Beil, M.D., of Montefiore Medical Group, acknowledged, “MTF trans people tend to be bigger, and may have certain strengths from before they started using estrogen.” As noted in a study published in the British Journal of Sports Medicine:

The decision to categorically restrict male to female transsexual athletes from competing in a given sport as females rests on two critical assumptions. The first is that most people exposed to testosterone from puberty onward will develop physical and/or physiological attributes that contribute to a distinct performance advantage over most women. Although the performance boundaries between male and female athletes have narrowed in the past several decades, there are distinct gender differences that exist on average.The second assumption needed to justify restricting male to female transsexual participation in female events is that these attributes can withstand the hormonal manipulation of sex reassignment, thereby giving the male to female transsexual athlete an unfair competitive advantage. Certainly, there are some effects of testosterone that cannot be reversed, including (most notably) its effect on postpubertal height in men. Men are on average taller than women, with the pubertal growth spurt accounting for most of the gender difference.

After acknowledging that surgery is unnecessary for trans athletes to compete, the IOC guidelines pontificate, “The overriding sporting objective is and remains the guarantee of fair competition. Restrictions on participation are appropriate to the extent that they are necessary and proportionate to the achievement of that objective.”

Here’s how that “fair competition” works, according to the guidelines:

Those who transition from female to male are eligible to compete in the male category without restriction.

Those who transition from male to female are eligible to compete in the female category under the following conditions:

The athlete has declared that her gender identity is female. The declaration cannot be changed, for sporting purposes, for a minimum of four years.

The athlete must demonstrate that her total testosterone level in serum has been below 10 nmol/L for at least 12 months prior to her first competition (with the requirement for any longer period to be based on a confidential case-by-case evaluation, considering whether or not 12 months is a sufficient length of time to minimize any advantage in women’s competition).

The athlete’s total testosterone level in serum must remain below 10 nmol/L throughout the period of desired eligibility to compete in the female category.

Compliance with these conditions may be monitored by testing. In the event of non-compliance, the athlete’s eligibility for female competition will be suspended for 12 months.

Joanna Harper, a transgender medical physicist who attended the November meeting, explained further, “The waiting period for trans women goes from two years after surgery to one year after the start of HRT. This matches up with the NCAA rules and is as good as anything. The waiting period was perhaps the most contentious item among our group and one year is a reasonable compromise.”