The Shabak and Israeli Police continue to harass Jewish youths on the Geulat Tzion hilltop. On May 23rd dozens of police and Shabak agents raided the hilltop to arrest Jewish youths.

Residents of the Geulat Tzion hilltop in Gush Shilo reported that the Shabak and Israeli police have began harassing them on a daily basis. The police have made arrests and raids in order to stop the continued settlement of the hilltop. Until around mid-May, the commander of the Binyamin region would issue daily proclamations declaring the area a closed military zone in order to harass the residents. Now, the Central Commander Roni Noma, who has also signed dozens of administrative orders against Jewish youths, signed an order barring any construction or residency in the area for the next year.

Since the month of Nissan, several youths have been learning on the hilltop regularly as part of a yeshiva program. However the Shabak agent calling himself ‘Oren’ who is responsible for the Gush Shilo region has been coming with police forces numbering in the dozens to harass the youths regularly. During the raids the police also lookout on the neighboring hilltops to make sure the youths have not run away to them. 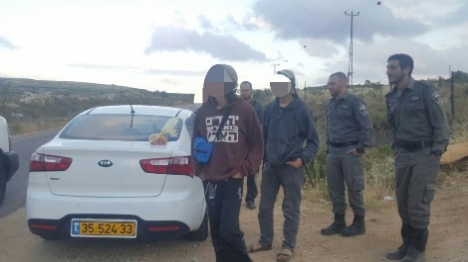 One of the youths arrested on the hilltop with his teffilin strapped on his shoulder.

The Honenu legal rights group noted that the largest raid occurred in the afternoon on May 23rd when around 15 police vehicles and dozens of police, detectives, border police, and riot forces, raided the hilltop from four different directions. The forces managed to catch three youths who learn on the hilltop. After their arrests, the officers read the youths the order banning any Jews from entering the hilltop and then released two of the arrestees. The third one was taken to the Binyamin Police Station and kept overnight. He was released the next day without any conditions and without being brought before a judge. Honenu said that they are currently analyzing the possibility of suing the police for improper arrest. 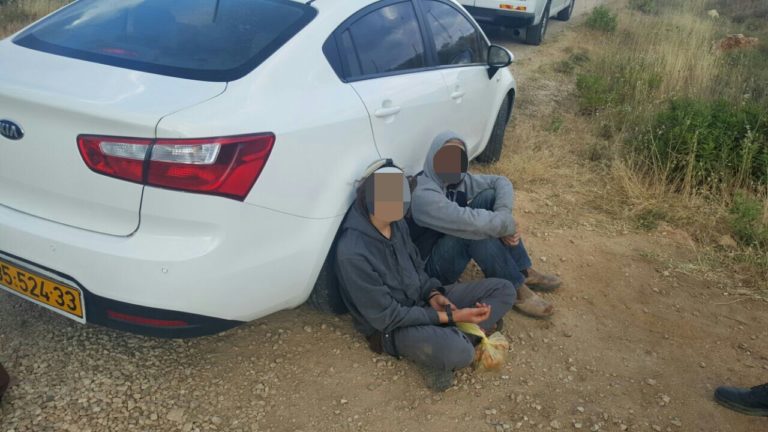 Two other youths arrested on the hilltop.

The residents themselves reported of nightly raids and noted that during the raids, the officers use night vision equipment and enter the various buildings on the hilltop. In one raid, a police commander broke down the door to a building and entered with his gun raised. Further, they noted that ‘Oren’ has regularly threatened Jewish youths learning or considering learning on the hilltop. Specifically, he said that he would have administrative expulsion orders issued banning them from Judea and Samaria if they did not leave the hilltop.

Honenu also noted that the army closure order on the area raises several legal issues. Lawyer Nati Rom, who assisted several of the arrested, noted that not for naught did the police avoid bringing the suspects to court. Rom claims that the police wanted to prevent the court from analyzing the legality of the military closure order and the arrests. 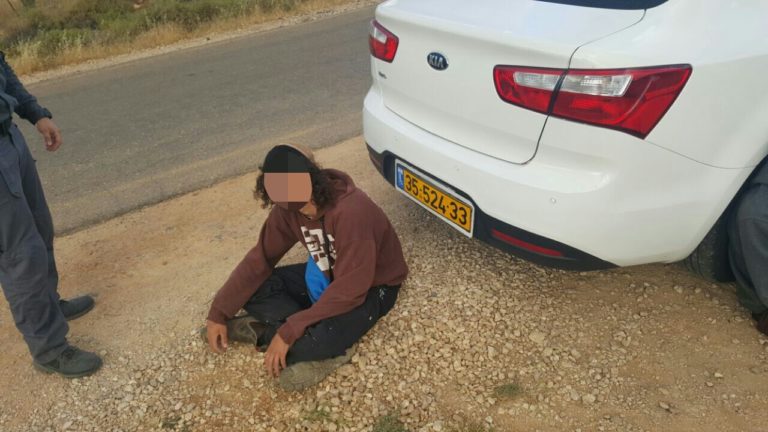 The youth being held after being arrested.

“In recent days, the Israeli police have invested considerable resources in the area of Geulat Tzion. Specifically they have arrested and detained Jewish youths with religious texts in their hands,” said Rom. “It is a shame to see time and again, Jewish youths being arrested in the middle of the night and being released in the morning as a way to punish them without bringing them before a judge. I think the Israeli police should consider carefully where they choose to invest their resources, especially now when there are many more serious problems in the country. Further they should consider the legality and morality of arresting minors in the middle of the night without a reason.”