‘Release Them Tomorrow’: Cruz Calls on Trump to Publish His Tax Returns Immediately 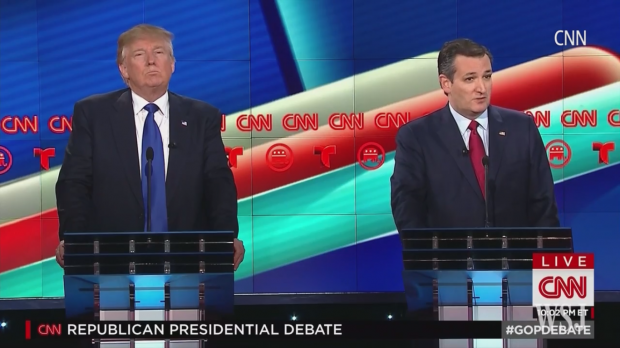 During Thursday night’s heated GOP debate, Republican presidential candidate Ted Cruz called on rival Donald Trump to release his tax returns, something Cruz says the billionaire is “afraid” to do.

Cruz slammed Trump, who is currently being audited, telling the audience that the billionaire businessman could release his tax returns tomorrow, and should in light of the audit, but said he “doesn’t want to do it because, presumably, there’s something in there that is bad.”

Trump responded, telling Cruz he has “nothing” to hide. However, he argued that he cannot release his returns because of the audits.

“The fact that Donald is being audited, I would think that underscores the importance of him releasing his tax returns,” Cruz argued.

But that did not deter Trump.

“I will absolutely give my return, but I am being audited now for two or three years, so I can’t do it until the audit is finished, obviously,” Trump continued. “And I think people would understand that.”

Cruz responded, arguing that his tax returns are “already prepared,” again adding that the billionaire businessman is “afraid.”

“The only reason he is not releasing them is because he’s afraid that he’ll get hit,” Cruz charged.

2012 Republican presidential candidate Mitt Romney, who called on all the candidates to release their tax returns, agreed with Cruz, tweeting that there is “no legit reason” for Trump to withhold his tax returns.

“No legit reason Donald Trump can’t release returns while being audited, but if scared, release earlier returns no longer under audit,” Romney posted to Twitter.

No legit reason @realDonaldTrump can’t release returns while being audited, but if scared, release earlier returns no longer under audit.

Others also criticized Trump’s claim that he cannot release his returns while being audited.

“I’m being audited”… Oh okay, I’m sure nothing is in the tax returns then.