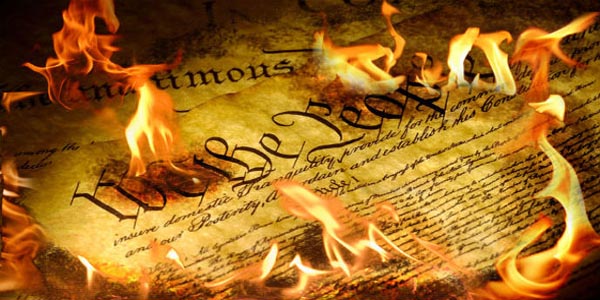 ‘Now we need a supermajority to override the president’

The bill that would enable Congress to review any nuclear deal with Iran is coming under fire for allegedly altering the Constitution’s requirements for treaties.

One prominent talk-radio host even is accusing the U.S. Senate of rewriting the Constitution to allow approval of a treaty with only one-third of the Senate, plus one.

WND has reported the Obama administration has been fighting any attempt by Congress to take oversight of an agreement with Iran’s rogue regime. But Obama reluctantly agreed to a proposal in the Senate that will be voted on in coming weeks.

The New York Times reported “the essence of the legislation is that Congress will have a chance to vote on whatever deal emerges with Iran — if one is reached by June 30.”

But the newspaper noted it would be reviewed “in a way that would be extremely difficult for Mr. Obama to lose.”

The report explained Congress “would essentially be able to vote on an eventual end to sanctions, and then later take up the issue depending on whether Iran has met its own obligations. But if it rejected the agreement, Mr. Obama could veto that legislation – and it would take only 34 senators to sustain the veto, meaning that Mr. Obama could lose upward of a dozen Democratic senators and still prevail.”

“The United States Senate just rewrote the treaty provision of the Constitution,” he exclaimed. “This may be over the heads of most commentators … but it’s not over my head, and it won’t be over yours.”

He said under the Constitution, the president has the power to negotiate treaties, and they are approved “provided two-thirds of the senators present concur.”

He said such a supermajority (67 votes) was called for by the nation’s Founders because they believed that leaving such decisions to a single person or a single body wasn’t responsible.

“Alexander Hamilton tells us” that joint possession of such power provides the greater prospect of success, he said.

Under the proposed legislation, Congress can review the president’s deal with the radical Islamists and can reject it with a 60-vote margin. But Obama then can veto it, and it would take a 67-vote total to overturn the veto.

“We’ve turned the treaty provision on its head,” Levin said. “Instead of requiring two-thirds of the senators present to approve, this bill explicitly” demands 67 votes to stop the president.

“He’s right. Because a treaty requires a two-thirds vote by the Senate to be accepted as law. [Sen. Bob] Corker’s bill turns that on its head, allowing Congress to vote down the treaty with Iran but giving Obama veto power, which must be overridden by a two-thirds vote. MEANING THAT INSTEAD NEEDING TWO-THIRDS OF THE SENATE FOR HIS TREATY, OBAMA ONLY NEEDS ONE-THIRD.”

He continued: “What Corker has done is legitimize Obama’s power grab. Congress could have instead voted this treaty down on its own and then passed legislation withholding funding for its implementation. Obama could also veto the measure withholding funds, which would require the same two-thirds override. But at least the point would have been made that he was acting unconstitutionally, and he would be on record as defying the Congress. As a practical matter, this would have made it far easier for a future president to discard the Iran deal.”

Koffler wrote that international agreements increasingly have been done by executive action, but this type of deal – “involving nuclear weapons for our most pernicious adversary and therefore the possible destruction of the United States – must by its nature qualify as a treaty under the Constitution, or there is no Constitution at all.”

Levin cited Hamilton’s writings on “The Treaty-Making Power of the Executive,” which state: “The history of human conduct does not warrant that exalted opinion of human virtue which would make it wise in a nation to commit interests of so delicate and momentous a kind, as those which concern its intercourse with the rest of the world, to the sole disposal of a magistrate created and circumstanced as would be a president of the United States.”

Hamilton continued: “A man raised from the station of a private citizen to the rank of chief magistrate, possessed of a moderate or slender fortune, and looking forward to a period not very remote when he may probably be obliged to return to the station from which he was taken, might sometimes be under temptations to sacrifice his duty to his interest, which it would require superlative virtue to withstand.”

Wrote Koffler: “Hamilton’s concern here is with that a president, being only human, might be tempted to do something that would benefit him financially, since he is soon headed back to the private sector. And sure, Obama’s memoir will fetch millions and will certainly be enlivened by an Iranian nuclear arms deal.

“But Hamilton could have just as easily used vainglory as he did venality as a choice of human weakness here. Obama has plenty of money, but a deficit of glory. Many believe Obama desperately wants an Iran deal to provide him with an illustrious legacy, particularly for a second term in which he has achieved nothing beyond making a mess of half the world.

“With the Corker bill, he now has Congress in his pocket as he joins Iran in shredding the Constitution over a Swiss negotiating table. And in 10 to 15 years, when Iran conducts its first nuclear test, Congress will have had a ‘role’ in the tragedy.”

WND reported earlier House Speaker John Boehner has been demanding a role for Congress in the Iran negotiations.

“I don’t know how you cut a deal with the devil and think the devil is going to keep his end of the deal,” he said.