‘Slaughter The Jews’ Exhibit at Israeli College Near Gaza 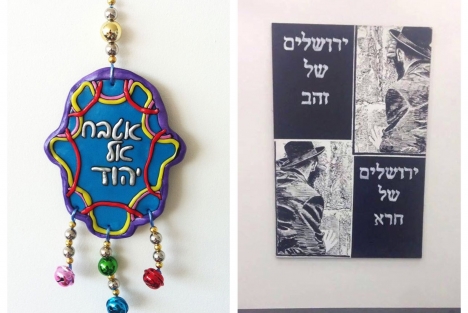 A contentious art exhibit at an Israeli community college near Gaza includes displays calling for the “slaughter” of the Jews and “in blood and fire we will redeem Palestine,” Israel’s NRG News said on Monday.

“The Power of the Word,” set to open Tuesday at Sapir College, near Sderot,” is seen by some as encouraging incitement [duh!], though its [Nazi] defenders insist that the exhibit is important because it “showcases opinions on both sides”. [Isn’t that nice of them?]

“There is no place in an academic institution for an exhibition which calls for the massacre of a people,” one irate student told NRG.

Ironically, the school, with an enrollment of some 8,000 students, sits just five kilometers from the border with Gaza and has been hit hundreds of times by rockets fired by Arab terrorists.

One longtime Gaza-area resident, Canadian-born Miriam Goodman, told The Algemeiner that she was outraged by the exhibit.

“How could they display such incitement? To [call to] slaughter Jews, and ‘our blood and fire will redeem Palestine,’ sends chills down my back, said Goodman, who lives nine kilometers from Gaza in the village of Ma’agalim.

“What came to mind was a Palestinian group in Canada that goes from city to city displaying art that they claim was drawn by children in Gaza showing our brave [IDF soldiers] as murders.

“Sapir College is no better – no they are worse,” Goodman insisted, adding that, “Citing free speech always seems to be a good excuse for incitement.

“If Sapir College allows this display to be shown, it should lose all government funding.”

However, organizer Liav Mizrahi, a lecturer in the School of Art at the college, says that “The exhibition features works that express opinions on both sides of the Israeli artistic divide.”

In response, Noam Barzani, a communications student at Sapir, declared: “We are angry that the college provides a place for an exhibition that encourages incitement.”

“Once you have a hamsa (decorative amulet on display) saying ‘Aitbah el Yahud’ (‘Slaughter the Jews’ in Arabic), this is a call for incitement to anything, and there is no place for this on either side of the divide. If there was an exhibition which said ‘Death to Arabs,’ ‘price tag,’ or ‘Occupy Gaza,’ there would be an outcry – and rightfully so. The particular political views don’t matter; if it had said ‘death to Arabs,’ it would be equally disturbing to me,” Barzani said.

The exhibition also displays a painting by artist David Reeb entitled “Jerusalem of Gold, Jerusalem of sh*t,” including images of ultra-Orthodox men at prayer at the Western Wall.

The exhibition’s plaque states that “the painting emphasizes the constant conflict and tension of the city.”

“This is, again, a vulnerable population group,” added Barzani.

“I understand that the artist was trying to be provocative, but to me there is no place for exhibits which defame a whole group, no matter if it is a rightists, leftists, Arabs or haredim. In addition, we were not allowed to see the exhibits on the grounds that the exhibition is closed until the official opening, and it comes across as an excuse to silence critical voices,” Barzani said.

Meanwhile, Jewish Home parliamentary candidate, Ronen Shoval, has filed a police complaint against the school, according to Israel National News.

“I demand that Sapir immediately remove the exhibition,” Shoval said, and called on police “to investigate the curator of the exhibition on suspicion of incitement to murder Jews.”

Asserting that “it does not make sense that an Israeli college, funded by taxpayers’ dollars, should hold an exhibition featuring incitement to murder Jews,” Shoval charged: “It is ridiculous that the freedom of expression by the extreme left gets broad legitimacy, while the national camp suffers from being shut up. It’s completely out of line.”

Several photos from the exhibition provoked a wave of protest among students at the college. A Facebook group opposing the show ­­ – “ISIS is not freedom of expression” – already has over 500 supporters, and opponents are planning a demonstration against the program on Wednesday.

Student Union chief Moran Baranes said, “There is no radical discourse at this college and relations between the various groups here are good. Once such an exhibition opens, it inserts a violent dialogue where none existed before. This is a cynical use of the concept of art to display an extreme position that goes beyond freedom of expression,” he said.

Mizrahi said in response, however that, “one should not view the show only through the details, each work separately and alone. One should hold an inclusive view of the works, read the accompanying texts, and see the variety of opinions in Israel. We must give a stage to views opposing our own.”

In an official response, Sapir College said, “The exhibition ‘Power of the Word’ shown at the new gallery at the School of Art includes works by some of the best artists in Israel.

“The artists whose works were included in this exhibition received institutional, governmental, and public recognition. Their works are well known to the art-loving public and have been exhibited and acquired by museums and collectors throughout the country.”