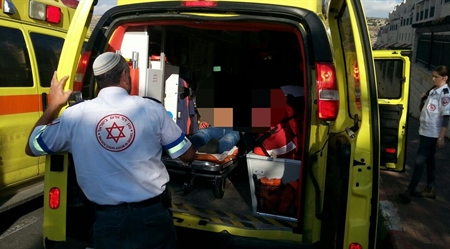 Security guard seriously wounded in terror attack at the entrance to Ma’ale Adumim mall, ax used in the attack.

A 48-year-old man was stabbed and seriously wounded overnight Thursday in a terrorist attack at the entrance to a shopping center in Ma’ale Adumim, located to the east of Jerusalem.

The man, who worked as a security guard at the shopping center, was taken by Magen David Adom paramedics to the Hadassah Ein Kerem Hospital in Jerusalem. The hospital said the victim’s life was in danger and that he was suffering from stab wounds to his upper body.

A statement from the hospital on Friday morning updated that the victim remains in very serious condition suffering life-threatening wounds, and that he is still in surgery.

On Friday morning police found an ax apparently used by the Arab terrorist in the attack. A police investigation also revealed the security guard was unarmed, according to Walla, raising questions regarding the security procedures.

Police are checking how the terrorist, who had a permit to work in Ma’ale Adumim, was at the mall late at night an hour after it closed.

The attacker fled the scene and police are searching for him. Security forces have decided that Palestinian Arab workers will not be allowed into Ma’ale Adumim until Sunday.

On Wednesday, 30-year-old Eliyav Gelman was killed by errant gunfire during a stabbing attack attempt by an Arab terrorist in the Gush Etzion region of Judea.

Gelman, who was critically wounded, was taken to hospital, where he victim later succumbed to his wounds and died.