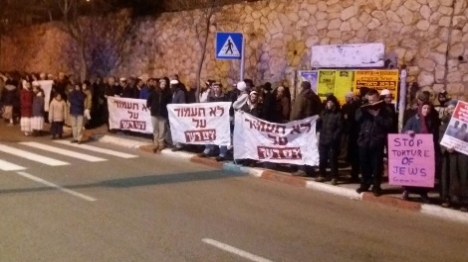 Once again three Jews have been thrown into the depths of Shabak interrogation rooms and are banned from meeting a lawyer. The wife of one of them fears he is being tortured.

Three Jews were arrested in the early morning hours of Tuesday April 5th and were taken to a Shabak interrogation facility. They are banned from meeting with a lawyer.

Aharon Roza is serving as the lawyer for the three on behalf of Honenu. He noted that all of the details of the suspicions against them are under gag order. Nonetheless, he rebuked the authorities for the use of an order banning him from meeting with his clients. “They have issued an order banning me from meeting the suspects. The accusations against the suspects do not justify the use of this order and I strongly protest against the use of this draconian measure. The suspicions here are very recent and relate only to damage to property.”

The wife of one of the suspects, Rachel, told Hakol Hayehudi about the arrest and about her concern for the wellbeing of her husband. “Police officers came to our home in the early morning. At first we thought they were Arabs who had penetrated the town  fence, but we soon realized that the police officers were no better than Arabs. They didn’t give my husband any time to gather a few things to take with him and they were extremely confrontational and violent. In truth they could have come at a normal waking hour, we don’t try to hide from anyone.”

Rachel and others organized a protest across from the home of the head of the Shabak on Wednesday April 6th. She was joined by the mothers of the other suspects and many supporters. They all fear that the Shabak is planning to use the same torture methods on their loved ones as was used to coerce confessions from the Duma suspects.

“Right now we are protesting together as families- women and children. We expect to receive fair treatment. At first they wouldn’t even let my husband take teffilin with him, only after he protested significantly did one of the officers agree to take it with them. I don’t even know if they are letting him put on the tefillin. I hope that he is not being tortured. I call on the public to wake up and protest the oppression by the police and Shabak. After their success with the use of torture on the Duma suspects, I fear they have decided to try it again,” concluded Rachel.