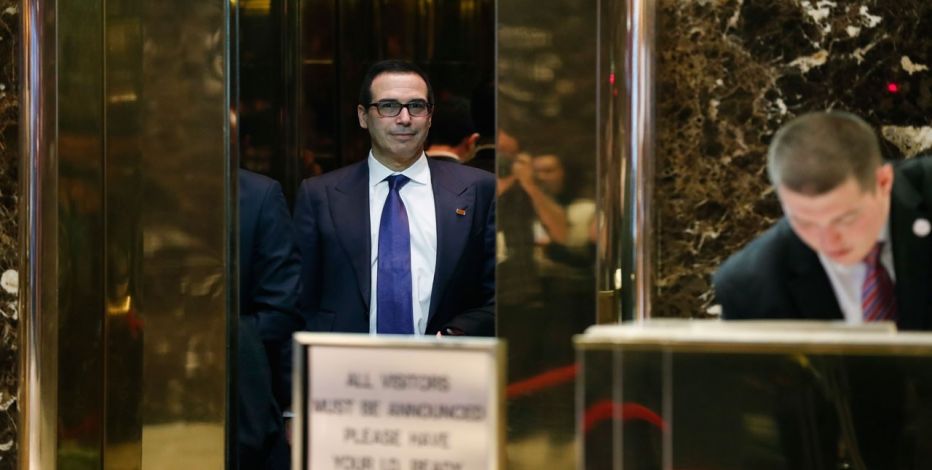 “More than half of his federal-level contributions have gone to Democrats, including Barack Obama and Hillary Clinton.”

Mr. Mnuchin, the son of a Goldman Sachs partner, joined the firm after graduating from Yale University. He worked there for 17 years, rising to oversee trading in government securities and mortgage bonds.

After leaving Goldman in 2002, he founded Dune Capital Management, a hedge fund named after the dunes near his beach house in the Hamptons.

He also started investing in the movie business and bought a house in Bel-Air. He is engaged to the actress Louise Linton, who would be his third wife.

His selection fits uneasily with much of Mr. Trump’s campaign rhetoric attacking the financial industry. Mr. Trump, in a campaign ad intended as a closing argument, portrayed the chief executive of Goldman Sachs as the personification of a global elite that the ad said had “robbed our working class.”

As a Hollywood investor, Mnuchin was involved in financing the “X-Men” franchise, “American Sniper,” and “Avatar.”

He has strong ties to both George Soros and Democratic candidates. More than half of his federal-level contributions have gone to Democrats, including Barack Obama and Hillary Clinton, and $2,000 to California AG Kamala Harris’ US Senate campaign. And:

From 2003 to 2004, Mnuchin worked as chief executive of SFM Capital Management, which the Wall Street Journal reports isbacked by Soros. He also worked for Soros Fund Management LLC, according to Bloomberg.

Mnuchin was part of the group which purchased IndyMac, a failed California mortgage lender, from the government in 2009. The group sold the company, which had been renamed OneWest, to CIT in 2015 for more than double the price the group acquired it for.

Transition sources say the announcement could come as early as Wednesday.