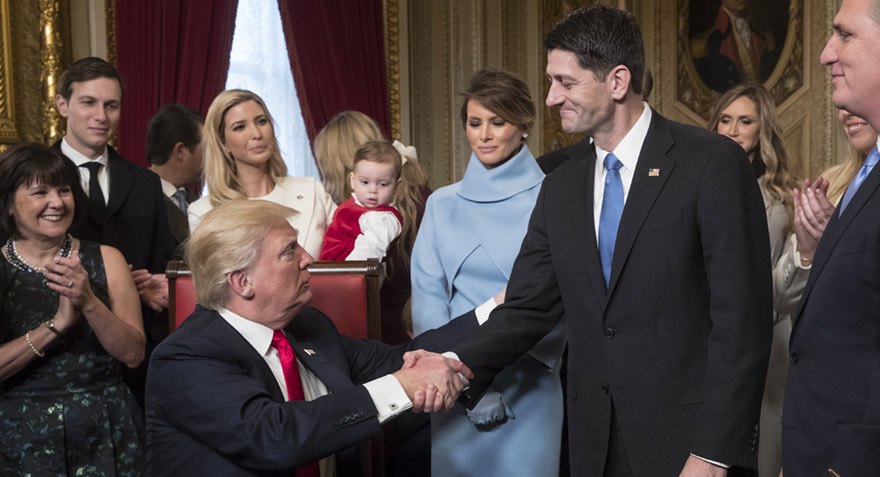 That’s on him and no one else. No one forced Donald Trump to get behind a bill that had an abysmal 17 percent approval rating among Americans — a bill that had no constituency.

No one forced Donald Trump to go to bed with the frauds in the big government GOP establishment. He chose to go to bed with RINOs Paul Ryan, Kevin McCarthy, and Steve Scalise instead of listening to the likes of principled constitutional conservatives Mark Meadows, Jim Jordan, and Louie Gohmert who simply insisted that Republicans keep their campaign promise to kill Obamacare completely — not replace it with another DC-ran scheme — people who were instrumental in leading the fight to repeal Obamacare in the first place.

Yet on Sunday, Trump went on the attack against the leading conservative and free market groups in America that want a clean repeal of Obamacare, illogically blaming them for funding Planned Parenthood that could be defunded in a separate budget that has nothing to do with Obamacare.

Setting aside that RINO GOP leadership in Congress, you know, the branch of government that controls all spending, has been funding Planned Butcherhood even after they won their majority thanks to the Tea Party in 2010, Trump is blaming the House Freedom Caucus, the Club for Growth, and the Heritage Foundation for Paul Ryan’s turd sandwich of a bill that he stupidly supported?

Democrats are smiling in D.C. that the Freedom Caucus, with the help of Club For Growth and Heritage, have saved Planned Parenthood & Ocare!

On the flip side, the president seemed to throw Paul Ryan under the bus by curiously encouraging people to watch Trump loyalist Judge Jeanine Pirro’s FOX News program on Saturday in a tweet.

Pirro began the show calling for Paul Ryan, who she later referred to as a RINO (a Republican in Name Only), to step down as Speaker of the House due to his failure to put forth a bill that would unite the various factions of the Republican Party and repeal Obamacare.

“Paul Ryan needs to step down as Speaker of the House,” Judge Jeanine declared with the first words of her opening statement. “The reason? He failed to deliver the votes on his health care bill — the one trumpeted to repeal and replace Obamacare — the one he had seven years to work on — the one he hid under lock and key in the basement of Congress — the one hat had to be pulled to prevent the embarrassment of not having enough votes to pass.”

A fired-up Pirro said that even more embarrassing was the fact that the bill failed even though Republicans have control of both houses of Congress and the presidency.

However, on FOX News Sunday, Trump White House Chief of Staff Reince Priebus, reportedly a close friend of Paul Ryan’s, told Chris Wallace that President Trump did not want Ryan to step down as Speaker and that Trump’s tweet promoting Judge Jeanine’s program and her calling for Ryan’s head were simply “coincidental.”

“First of all, I will go on record, we do love Judge Jeanine, and so does the president,” Priebus said. “I think it was more coincidental.”

Priebus reminded Wallace that on Friday, Trump said that he didn’t blame Ryan and said that Trump was simply helping out a friend with his tweet promoting the program.

“He believes what he said in the Oval Office on Friday, he doesn’t blame Paul Ryan. He thought Paul Ryan worked really hard, enjoys his relationship with Paul Ryan, thinks that Paul Ryan is a great speaker of the house. None of that has changed.

I think this is more of a personal relationship and the president helping out a friend.”

“Republicans promised a bill that would stop #Obamacare’s taxes and mandates, but #RyanCare fails on both counts.” https://t.co/MGkBHO5CFW

Any #RepealObamacare bill moving forward must address these regulations that are responsible for high costs https://t.co/JIkqIaW4jg

Because the AHCA vote was cancelled, Republicans can work on a better plan that repeals burdensome regulations https://t.co/osrhoR5URP

House Freedom Caucus founder Jim Jordan told a contentious Chris Wallace on FOX News Sunday that the Caucus did the country a favor by not passing the bill because it didn’t keep the promise of repealing Obamacare.

“Maybe, by the fact we opposed it, we did the country a favor because this bill didn’t repeal Obamacare,” the Ohio Republican told Wallace. “This bill didn’t do what we told the American people we were going to do.”

If there is a warring faction in the White House between the likes of establishment stooge Reince Priebus and Steve Bannon to steer President Trump, it’s clear that the GOP establishment is currently winning that battle.