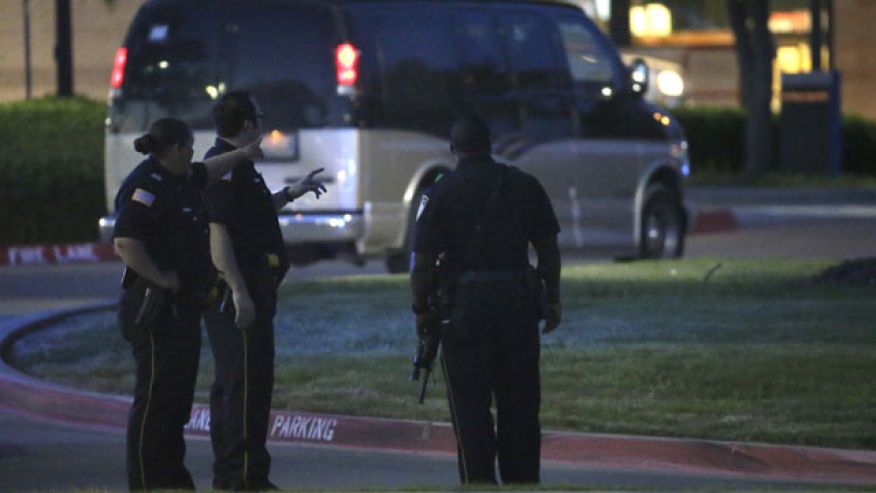 Two armed men were killed after opening fire on a security guard outside an exhibit of artistic depictions of the Muslim prophet Muhammad in suburban Dallas Sunday evening.

The City of Garland said in a statement posted on its Facebook page that the men drove up to the Curtis Culwell Center and began shooting at the security officer. Garland Police Department officers returned fire, killing both gunmen, the statement said.

The Garland Independent School District, which owns and operates the Culwell Center, identified the wounded security officer as Bruce Joiner in a statement. The statement added that Joiner was shot in the ankle, was treated and released from a local hospital.

The statement did not say whether the shooting was related to the event, a contest hosted by the New York-based American Freedom Defense Initiative (AFDI) that would award $10,000 for the best cartoon depicting the Prophet Muhammad.

Authorities said they were worried that the suspects’ car could contain an incendiary device. Several nearby businesses were evacuated as a precaution and a bomb squad was on the scene early Monday. Police had cordoned off a large area and at least three helicopters circled overhead.

The bodies of the gunmen, who have not been identified, still lay where they fell early Monday because they were too close to the car to be removed before the scene was clear, according to Officer Joe Harn, a spokesman for the Garland Police Department.

“Because of the situation of what was going on today and the history of what we’ve been told has happened at other events like this, we are considering their car (is) possibly containing a bomb,” Harn told reporters. He added that police are are not aware of any ongoing threat and had not received any credible threats before the event, Harn said.

“Texas officials are actively investigating to determine the cause and scope of the senseless attack,” Texas Gov. Greg Abbott said in a statement issued late Sunday.

“Muhammad fought and terrorized people with the swords. Today, here in Garland, we fight Muhammad and his followers with the pen. And the pen, the drawings, will prove mightier than the sword,” Wilders said during his speech.

Geller said during the event that her group had spent thousands of dollars on private security guards, several of whom could be seen standing on stage. Wilders left immediately after his speech, and Geller was not seen by an Associated Press reporter inside the hall after the shooting.

After the shooting, about 75 attendees were escorted by authorities to another room in the conference center. A woman held up an American flag, and the crowd sang “God Bless America.”

They were then taken to a separate location, where they were held for about two hours until they were questioned briefly by FBI agents who took brief written statements from most people. Police officers drove some attendees to their homes and hotels, and arranged hotel rooms for others whose cars remained under lockdown.

Johnny Roby of Oklahoma City, Oklahoma, was attending the conference. He told the AP he was outside the building when he heard around about 20 shots that appeared to be coming from the direction of a passing car.

Roby said he then heard two single shots. He said he heard officers yell that they had the car before he was sent inside the building.

Geller told the AP before Sunday’s event that she planned the contest to make a stand for free speech in response to outcries and violence over drawings of Muhammad. Though it remained unclear several hours after the shooting whether it was related to event, she said Sunday night that the shooting showed how “needed our event really was.”

In January, 12 people were killed by gunmen in an attack against the Paris office of the satirical newspaper Charlie Hebdo, which had lampooned Islam and other religions and used depictions of Muhammad. Another deadly shooting occurred the following month at a free speech event in Copenhagen featuring an artist who had caricatured the prophet.

Geller’s group is known for mounting a campaign against the building of an Islamic center blocks from the World Trade Center site and for buying advertising space in cities across the U.S. criticizing Islam.

When a Chicago-based nonprofit held a January fundraiser in Garland designed to help Muslims combat negative depictions of their faith, Geller spearheaded about 1,000 picketers at the event. One chanted: “Go back to your own countries! We don’t want you here!” Others held signs with messages such as, “Insult those who behead others,” an apparent reference to recent beheadings by the militant group Islamic State.